Moshe Dayan: A Life in Pictures

Home > History of Israel > Moshe Dayan: A Life in Pictures
Land of Israel

The Israeli general and politician Moshe Dayan was one of the most iconic and photogenic figures in the country's history. We dove into the National Library collections and selected a handful of pictures that captured both historic and personal moments in his eventful life 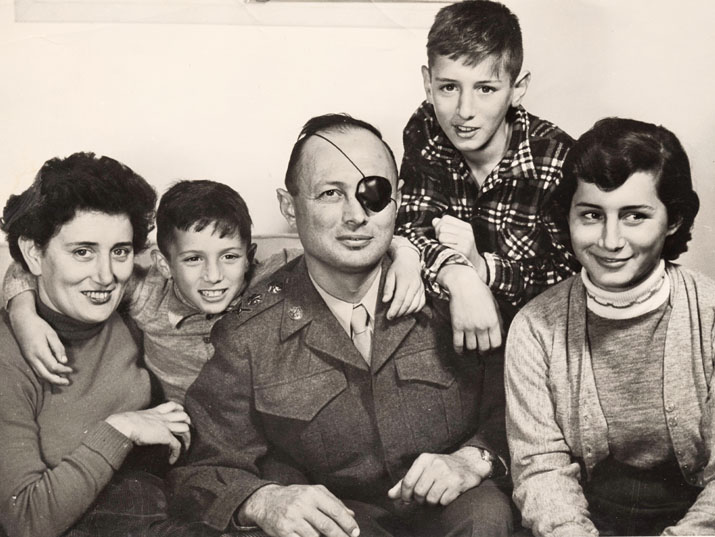 No deep dive into the dark recesses of the archives was required here.

Moshe Dayan was a star attraction for Israel’s leading photographers during the early years of Jewish statehood. In fact, narrowing down the selection of photographs presented here was no easy feat. Dayan had always been drawn to the cameras, and the cameras were drawn to him.

Among the photographers who frequently shot the young IDF Chief of Staff was Benno Rothenberg, a colorful figure in his own right and a prominent professional cameraman in Israel who shared Dayan’s love of archaeology. Shortly before his death, Rothenberg deposited his 50,000 photographs in the trusty hands of collector Zvi Meitar, as did two other leading photographers – Boris Carmi and Moshe Levin. The digitization of these collections has recently been completed, in cooperation with the Zvi and Ofra Meitar Family Fund. The photos are now available online on the National Library of Israel website.

It is also worth mentioning the work of photographer Dan Hadani. From 1965 and until the year 2000, Hadani managed the Israel Press and Photo Agency (IPPA), documenting countless events in the history of the State of Israel: wars, elections, protests, social struggles, settlement projects, ceremonies, concerts, various cultural events and more – all together nearly a million frames. This collection was transferred to the National Library several years ago, with almost half a million images now accessible through the Library catalog.

In addition to the above, a number of unique, special photographs of Moshe Dayan were deposited at the National Library in 2017 as part of his son Assi Dayan’s personal archive. Several more photos come from the Bitmuna Collection and the Ben Zvi Institute Archive. All of these are made accessible on the National Library of Israel website as part of the Pritzker Family National Photography Collection.

Matan Barzilai, head of the Archives Department at the National Library of Israel, took part in the preparation of this article.