The Rise and Fall of Jerusalem’s Rex Cinema

Everyone frequented this Jerusalem movie theater: Jews, Arabs and British soldiers. So why was it destroyed, not once but twice? 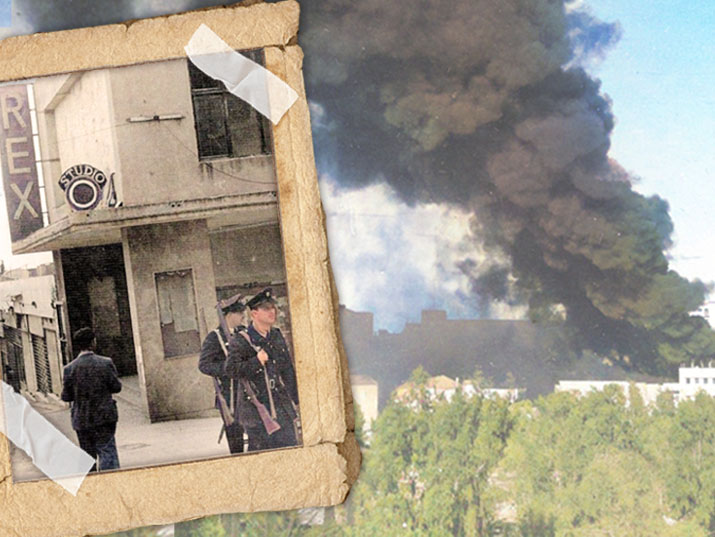 Today, Shlomzion Hamalka Street in Jerusalem is the main thoroughfare leading to the Mamilla Avenue mall and its fancy shops. On weekends and holidays, you can find many Israelis strolling along, sitting in the cafes or simply window-shopping down the street. Eighty years ago, this road was one of the main streets of British Mandatory Jerusalem. Arabs and Jews alike, dressed in their best, would enjoy the restaurants and cafes that dotted the area, and afterward catch a movie playing at the Rex Cinema located at the bottom of the street.

‘”How was the movie?’ we often asked. ‘The movie wasn’t anything special, but the fight after it was really fun!'”

This was how Eliyahu Nawi, the well-known Jerusalem storyteller, described his outings to Rex Cinema on Princess Mary Street in Mandatory Jerusalem, as it was known back then.  Nawi recalled how at the end of a film starring the Arab singer Mohamed Abdel Wahab and the Jewish actress Leila Murad, a fight broke out among the Jewish and Arab moviegoers, instigated by the cinematic conflict between the characters in the film.

Rex Cinema was torn down a long time ago and Princess Mary Street became Shlomzion Hamalka Street (named after the Hasmonean Queen Salome Alexandra), but local historians still remember the daily screenings at the magnificent cinema in Mamilla, of which no trace remains. Although Nawi focused on the brawls after the screenings, the violence did not stop there, and after two attacks (some would call them acts of terrorism) by the Irgun, the magnificent 1,300-seat cinema, was destroyed and abandoned. Eventually a shopping center was built on its ruins by the Israel Brothers company.

Rex Cinema stood out among the movie theaters in Jerusalem during the British Mandate. While other cinemas operating at the time—Zion, Edison and Eden—were Jewish-owned, Rex Cinema was owned by Joseph Pascal Albina, an Arab-Christian businessman. Albina collaborated with many Jews on various projects, often defying the decisions of the Arab Higher Committee. He was also the owner of the film production compamny “Nile Films,” and founded Rex Cinema in order to screen his films there.  Albina hired contractor Yona Friedman, a Jew, to build the cinema, but when the project was completed, Albina found himself short on funds, and instead of paying Friedman, he made him a partner in the cinema. Rex Cinema opened on June 6, 1938, and screened mostly Arab films alongside westerns and popular European movies. The cinema catered mostly to Jerusalem’s Arabs as well as to British soldiers, clerks and officials of the various mandatory institutions, but Jews also numbered among its patrons.

In May 1939, less than a year after Rex Cinema opened, the British Mandate Government published its infamous “White Paper”, announcing restrictions on Jewish immigration to the Land of Israel. The move was seen as a direct attack on the Jewish community in the country, and the Irgun quickly responded with a counter-attack. Yaakov “Yashka” Eliav (nicknamed “the velvet-eyed terrorist” by the British), who was the Irgun’s commander of operations and later one of the founders of the Lehi organization, recalls in his memoir that Rex Cinema was chosen because it was “inside the British government zone . . . and because of its location and modern facility it attracted the government’s top brass, as well as the upper echelons of local Arab society. The attack on the cinema was intended to strike at the heads of the British military, civilian and police authorities, as well as members of the audience who were among the leaders of the Arab public and supporters of the violent gangs.”

On May 29, Irgun members slipped into the cinema before the screening of the movie “Tarzan”. They proceeded to booby-trap the theater with explosives concealed within an ordinary-looking coat as well as bombs hidden in boxes of candy. At 8:30 pm, the explosives went off just as the famous MGM lion roared to signal the beginning of the film. The frightened crowd fled the theater only to find that the Irgun had set another trap for them. Members of the Jewish underground waiting nearby in Mamilla’s Muslim cemetery opened fire at the people attempting to flee. Five Arabs were killed, and 18 others were wounded: six British, ten Arabs and two Jews. The cinema suffered heavy damages, and the incident became the talk of the town. Following the attack on the theater, the British military commander in Jerusalem issued an order closing all cinemas in Jerusalem, along with other cultural institutions. The Irgun continued its attacks on various targets in the city, and it seemed as if this was the end of Rex Cinema. However, the outbreak of World War II provided a somewhat surprising revival. With the arrival of more British military personnel in the city came a renewed need for an English-speaking cinema. Rex’s owners moved swiftly to repair the building and reopened the theater at full capacity.

The Euphoric Years and a Sudden End

Throughout the 1940s, Rex Cinema served as a meeting place for Arabs, Jews and British in Jerusalem. Contrary to the memoirs of Irgun members, according to which the Jewish population of Jerusalem did not frequent the cinema, it seems that many in fact did. Hebrew newspapers published ads for films playing at the Rex alongside greetings for Rosh Hashanah, the Jewish New Year.  In 1946, a rumor spread that the Jewish partners had quit the cinema but the management immediately came out with a special notice debunking the rumor.

Princess Mary Street was one of Jerusalem’s most modern and cosmopolitan streets during the Mandate era, and the Rex was the only downtown cinema open on Saturdays. On the building’s top floor there was also a small boutique cinema named simply, “Studio.” In an article in Al Hamishmar, Gabriel Stern described the atmosphere in Jerusalem in the 1940s, writing that the war years, ironically, were years of rapprochement and relative peace between the two peoples in Jerusalem. The cinema’s location made it an obvious meeting place for the various populations. In the interim period between the 1939 White Paper and the outbreak of the War of Independence in 1947, Jews felt quite comfortable there, especially on Friday nights and holiday eves. Iconic Israeli singer Yossi Banai nostalgically recalled going to matinees at the cinema with his friends Simon and Moise in one of his most famous songs. The midday screenings were always cheaper than the evening films. The euphoria continued at Rex Cinema until the evening of November 29, 1947.

Yossi Banai: “Me and Simon and Little Moise”

Following the UN declaration and ensuing protest against the Partition Plan, the Arab Higher Committee called for a three-day strike of the Arab population in Mandatory Palestine. The tense atmosphere among Jerusalem’s Arab residents eventually exploded. On the morning of December 2, 1947, an Arab mob attacked the commercial center in Mamilla, and its mostly Jewish shop owners. The British forces that were supposed to protect them focused mainly on pursuing the handful of Haganah defenders, while the rioters, most of them equipped with axes and knives, set fire to the shopping street and attacked the merchants. In retaliation, the Irgun set fire to Rex Cinema. As opposed to their first carefully planned attack, this time, the violence was more spontaneous. The Hebrew newspaper Herut carried a story about the attack, as retold by its commander, Moshe Solomon (“Natan”): We didn’t receive any orders for it, we were a total of five Irgun members […]. We arrived at Rex, broke down the doors and began tearing things apart, just like what we saw was going on across the shopping center. We set fire to the projection booth and the rest of the building […]. After the operation, I informed my superiors in the Irgun and they approved our actions after the fact.”

The highly flammable nitrite film reels ensured that the cinema would burn to the ground. The clouds of smoke billowing up into the sky were visible throughout the city, and were even caught on camera by some photographers. On that day, Rex Cinema, which had served Arabs, Jews and the British in Jerusalem, closed for good. The building stood in ruins until the 1960s, when the present-day shopping center was built on the site.