Djemal Pasha’s Revenge on the People of Jerusalem

In the midst of WWI, residents of Jerusalem witnessed a horrific spectacle: the hanging of five local citizens by the Ottoman authorities. A photograph of the scene has since become a Jerusalem legend linking Christians, Jews and Muslims. 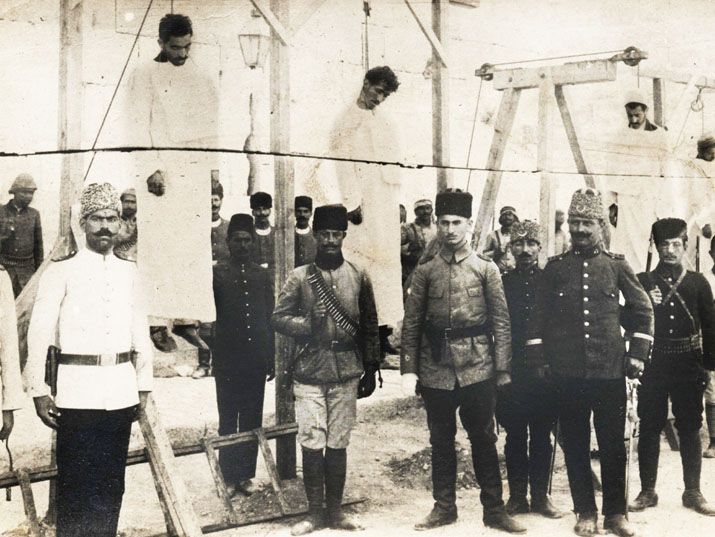 This photo was likely taken by photographer Khalil Raad, who arrived at the scene before the bodies were taken down. Some say he later sold the picture at his store, while others claim it was passed to a relative of one of the deceased by a former Ottoman official, the Ben Zvi Institute

In June 1916, Ahmad Djemal Pasha, commander of the Ottoman Fourth Army and ruler of Damascus province, found himself facing a difficult problem: many soldiers had deserted from the ranks, and he was suffering a severe manpower shortage. Following the unsuccessful Ottoman attack on the Suez Canal, the defeated, exhausted and hungry soldiers returned to the Land of Israel. Jerusalem, like many other cities in the Ottoman Empire, filled with deserters, who hoped to escape the attention of the authorities.

The military police roamed the city in search of the absentee soldiers, who were called “Farar” (Arabic: فرار). Djemal Pasha, who urgently needed men, sentenced any deserter who would not turn himself in to death, but to no avail. In his cruel rage, he decided to teach the public a lesson. He ordered his men to seize five deserters and execute them in a central location in the city. The unlucky five—two Jews, two Christians and one Muslim—were caught and hanged in an expedited procedure. This is their story.

The Sick Man on the Bosphorus

The Ottoman entry into the First World War led to a severe economic crisis throughout the empire, in the Middle East in particular. Jerusalem was especially hard hit. Local tourism had collapsed and many sources of funding had dried up. A drought severely affected farmers’ crops, and if all of that wasn’t enough, in 1914–1915, the Middle East suffered a devastating locust plague that reached the Holy City as well. Moreover, the forced conscription imposed by the Ottoman regime left many families without a breadwinner, and poverty and hunger were rife. Many of the local men, instead of being sent to combat units, were sent to the “Amaliya,” hard labor battalions in the service of the Ottoman army.

The combination of World War I and the economic crisis led to low morale and very high desertion rates among Ottoman soldiers in the Middle East. At the same time, local national movements began to revolt against Ottoman rule and side with the Allied Powers. Cases like the establishment of the Zion Mule Corps that took part in the Battle of Gallipoli and the revolt of Sharif Hussein of Mecca led Djemal Pasha to behave violently toward anything he interpreted as disloyalty or disobedience. Throughout 1915–1916, Ahmad Djemal Pasha committed a series of war crimes and acts, the Armenian Genocide foremost among these, which cemented his status as one of the cruelest figures of the First World War.

The Hanging at the Jaffa Gate

In the middle of 1916, after the hanging and exiling of deserters and “traitors” across the Middle East, Ahmad Djemal Pasha arrived in Jerusalem to deal with the local deserter problem. He announced that he would sentence to death any deserter who did not surrender by the end of June 1916. His promise to pardon all the fugitives if they returned to their units, did not help. In his rage, Djemal Pasha ordered five runaways caught at random to be hung, as an example. The deserters were chosen on the basis of ethnicity—two Jews, two Christian Arabs and one Muslim Arab.

Within a day, five defectors meeting his requirement were captured and hung in Jerusalem’s main square, which at the time was located by the Jaffa Gate. The five were Ibrahim Andelft and Musa Sous, Christian Arabs; Ahmad Alozu, a Muslim; and Moshe Melal and Yosef Amozig, who were Jews. The convicts were granted a final meeting with a cleric, after which they were hanged. Around their necks hung signs stating their alleged crime, and their bodies were left hanging on the gallows until the evening hours, giving Djemal Pasha’s violent message time to sink in.

The news of the hanging of Jews by the Ottomans spread in the city, and the next day it was also reported in the Ha-Herut Hebrew newspaper, including the last requests of those sentenced to death. Amozig, according to the report, sufficed with drinking a little water before being executed; Melal, on the other hand, asked that the money owed him be collected and paid  to his mother and also demanded that the blindfold that had been placed on him be removed, so that he might walk toward his death with his eyes open. The reporter added that unfortunately the blindfold request was refused as it was contrary to Ottoman law.

The execution of Yosef Amozig was particularly tragic, as he was not a deserter at all. Amozig was born in Morocco and immigrated to Jerusalem with his sister and mother, Hanina. Like his father, Amozig became a tailor and set up a workshop together with a local Muslim in the Old City of Jerusalem. Among his clients were wealthy families such as the Nashashibis, and some say he even made clothes for Djemal Pasha and his entourage. Amozig closed his workshop with the start of the Great War before he was drafted into the army and sent to work as a tailor at a base in Beersheba, the only Ottoman-established city in the Land of Israel.

One day, Amozig’s commander sent him back to Jerusalem to sew some uniforms for him. He had just reopened his workshop and started on the commission when he was spotted by Ottoman army informants who mistook him for a deserter. He was apprehended by the military police and imprisoned. Amozig was beset by difficulties to explain his presence in the city: he was unable to contact his commander in order to clarify his mission, and his military transit permit had disappeared. Amozig’s mother tried desperately to find the permit, but could not. After his arrest, Amozig was placed in “The Kishla”, the local prison near the Tower of David. The permit was not found, and he was forced to meet his end at the gallows.

Esther Harrush, Amozig’s niece, who later married Akiva Azulay, a deputy mayor of Jerusalem, was one of the few who remembered the story, which was known in a few, slightly different versions. Over the years, the Sephardic Jews of Jerusalem retold the story of the hanging of Amozig and Melal until it became a well-known Jerusalem urban legend. One of the details that emerged years after the execution was that the executioner was a Jew named Mordechai Sassoon, who carried out the Ottoman orders with a heavy heart and accompanied the Jewish victims to the last.

Djemal Pasha’s decision to hang five people by religious affiliation was unusual, even compared to the rest of his brutal actions during the war. The randomness of the choice, the expedited sentencing of the victims and the impact on the various communities in the city made the incident a landmark in the history of Jerusalem. Amozig and Melal, martyrs hanged because of their Jewish faith, take their place alongside Naaman Belkind and Yosef Lishansky, members of the Nili organization, who were executed on account of espionage in the same period. To some extent, this story is yet another symbol of Jerusalem’s sacred status to the three monotheistic religions, a place where their believers meet, live and die together.

Year of the Locust : A Soldier’s Diary and the Erasure of Palestine’s Ottoman Past / Salim Tamari