The First Woman to Sign Israel’s Declaration of Independence

Rachel Cohen-Kagan was one of the most prominent activists for the advancement of women's rights in the young State of Israel. Her efforts led to her being among the signatories of the Declaration of Independence 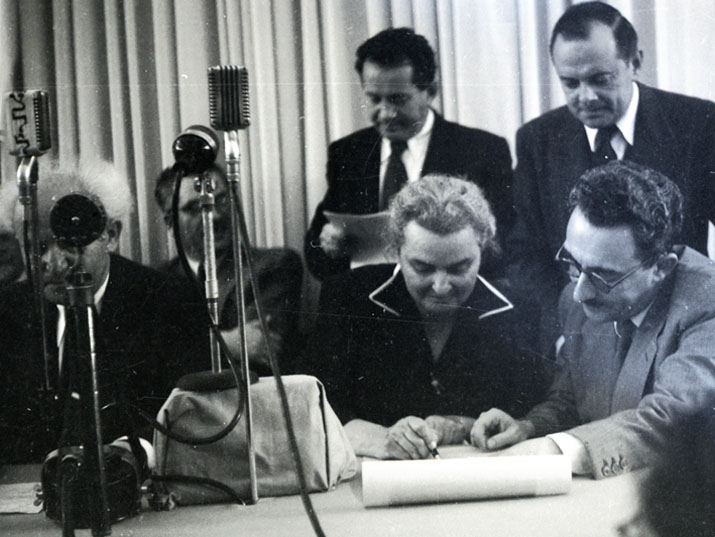 Rachel Cohen-Kagan at the declaration of the new state. Photo: Benno Rothenberg, from the Meitar Collection, the Pritzker Family National Photography Collection at the National Library of Israel

In recent times, elections have been a frequent topic of discussion here in Israel, a natural result of having no less than four over a span of three years. Yet only occasionally does the important issue of women’s representation in the Knesset, Israel’s parliament, make the headlines. On Election Day, broadcasters busily analyze election forecasts to determine, among many other things, what the number of women will be in the new Knesset, but the issue typically gets pushed to the side fairly quickly.

It turns out that the matter of female representation has been a key concern of Israel’s elected representatives—and especially of the elected women representatives—since the very first days of statehood. One person who stood out for her activities on the matter was Rachel Cohen-Kagan, one of the early champions of Israeli feminism. Throughout her years in the Knesset, she fought hard for women’s equality and rights.

Cohen-Kagan was born in the city of Odessa in 1888 to the Lubarski family. She studied mathematics at the University of Odessa, and then married Dr. Noah Cohen, a medical doctor from Tashkent. In 1919, they were among the new immigrant passengers on the Ruslan, a famous ship whose voyage marked the traditional beginning of the Third Aliyah, a major wave of Jewish immigration to the Land of Israel. She eventually joined WIZO and became active in the Zionist women’s organization until she was chosen as its chairperson following the death of Henrietta Szold.

Cohen-Kagan was the WIZO representative on the National Committee (the executive branch of the pre-state Assembly of Representatives) where she was in charge of the Social Welfare department, and when the People’s Council was established, Cohen-Kagan was WIZO’s representative there as well. As a member of the People’s Council, she was one of the 37 signatories to the State of Israel’s Declaration of Independence, and one of only two women to sign it. In fact, she was the first woman to sign the Declaration, before her colleague Golda Meir (Meyerson), since the signing was in alphabetical order, and the Hebrew letter כ (kaf) comes before מ (mem). Cohen-Kagan described her feelings during the historic event: “When a person feels that a dream becomes a reality and their heart fills with joy, they can scale the rooftops. To this day, I find it difficult to put into words what I felt on that day. My language abilities, specifically, and human language in general, fall short. I think it can only be properly expressed through music and art.”

In the run-up to the First Knesset elections, or the “Constituent Assembly” as it was then called, WIZO merged with the Union of Hebrew Women for Equal Rights in Erez Israel in order to run as the first and only all-women party. Even prior to the elections, Cohen-Kagan raised the issue of women’s representation in parliament. She was interviewed by Haaretz in December 1948 (a few weeks before the January elections), but the interview was buried in the women’s section of the paper – “La’isha velabayit” (“For Women and the Home”).  In the interview, titled “Women Needed for our Constituent Council,” Cohen-Kagan said: “To be honest, being the only woman in parliament is not pleasant; it’s even hard! . . . The very fact implies difficulties. Just as it would be rough for a man if he were the only one in an all-women parliament.” Later she added, “…to this day the male public views the appearance of a woman at the parliamentary gates as a very special phenomenon. In this respect, a good degree of maturity is still lacking on the part of men. They simply have a hard time forgetting that I am a woman…”

Cohen-Kagan, who believed that women bring a unique perspective, saw women’s representation in the Knesset as a necessary component for the running of the state: “It is important and imperative that the women’s point of view be given greater prominence. Just as a man and a woman’s viewpoints integrate in the private household and everything is conducted through the merging of the two approaches for the sake of harmony and good will, it should be the same in the running of the state. In this way, the woman’s viewpoint will be expressed and realized in all general matters, and especially in those in which a woman’s participation is essential, because she is the one who looks out for the needs of daily life.” Cohen-Kagan believed there were certain issues in which the women’s viewpoint was especially significant: “Most important here are questions of welfare, social security for children and the elderly and the problem of education in general. I have no doubt that with the influence of women’s participation in the life of the state, there would be greater concern for all the weak and disadvantaged in our country, a more humane approach to their problems, and without doubt, their situation would improve.”

WIZO won one seat, and Rachel Cohen-Kagan entered the first Knesset. During her tenure, she proposed the “Family and Equality of Women” law in 1951, sought to combat violence against women, supported women’s service in the IDF and dealt with other issues to promote the status of women in Israel. In 1951, the Knesset dissolved and the WIZO party never ran again as an independent party. Ten years later, Rachel Cohen-Kagan ran again for the Knesset and was elected as a member of the Liberal Party in 1961. She served as a Knesset member for another four years.

Many thanks to Dr. Sharon Geva who greatly assisted in the preparation of this article. You can find more information about Rachel Cohen-Kagan and the activities of other women in the early days of the State of Israel at the National Library of Israel.