Is there a connection between the pointed hat worn by mythical dwarfs and gnomes and the hats once worn by the Jews of Europe? 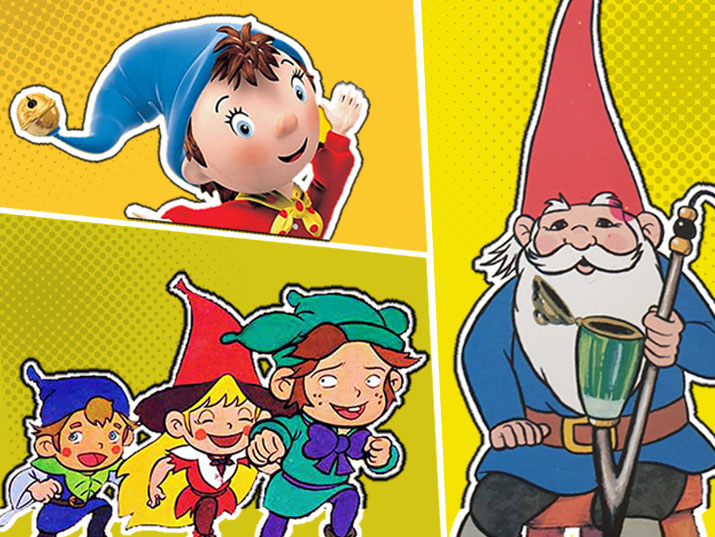 Once upon a time, there were dwarfs. Their popular image crystallized in the middle of the 13th century in European, and particularly German folklore. They were described as small creatures that were known to be greedy tricksters and treasure hunters. One of their prominent features was their ability to distort or impair vision: they could vanish and appear as they wished and could temporarily or permanently blind anyone who saw them.

Some legends added various details which described dwarfs as a people originating from Asia or some unknown distant land. In some of the stories, they sang songs in an unfamiliar language to the hero who chanced upon them. In the folktales, dwarfs traded in costly fabrics, gold and precious stones, which they brought with them from the East. They often had a mystical connection to these valuable treasures, from which they drew magical powers — a fact that also made them vulnerable. In some legends, the dwarfs told of how they were expelled from their land by humans, or how their treasures were looted or lost.

In the 13th and 14th centuries, artists began to depict dwarfs wearing a pointed cap. The pointed hat originated in the East, but over time, it became more closely associated with dwarfs and was believed to be the most dangerous weapon in their possession. They used it to trick the viewer, to disappear from sight or impair the vision of whoever happened to see them.

Although there were stories that described the dwarfs as creatures who had been maltreated and as close allies of folk legend heroes, the character of the dwarf was often pictured as unreliable, unfaithful, vengeful and deceitful.

Those familiar with European Jewish history can perhaps draw some similarities between the tales of the dwarfs and the everyday lives of Jews in medieval Germany. The Jews of Ashkenaz were a people with origins in the Levant who had been dispossessed of their land, and they too often appeared as merchants laden with all kind of expensive goods, reputedly brought from distant lands such as the deserts of Arabia or the Caucasus. Due to the occupational restrictions imposed on them in many places, they were forced to earn a living by moneylending at interest and soon their neighbors accused them of “hoarding treasures,” greed and deception. Some attribute these beliefs to the French King Philip IV, and his decision to expel the Jews from his land in 1306, in the hope that he could seize their abandoned treasures. Indeed, “Philip the Fair” greatly enriched his coffers with property left behind by the Jews.

In the middle of the 13th century (around the same time the image of the mythical dwarf became prominent in European culture), the first decrees came into force that required Jews to wear a special hat that would distinguish them from the Christian populace. Coincidentally, it was usually a pointed hat—a style of hat identified with the ancient East. In Chen Malul’s article, here, we examined the incarnations of the hat and how it ended up atop the heads of Europe’s Jews. What was the purpose of the decrees? Why was it important to differentiate Jews from their Christian neighbors?

Like the dwarfs, the Jews were accused of distorting reality because they did not see the truth that was before them. In Gothic cathedrals one can often find the blindfolded figure of Synagoga, which represented the Jewish faith. The image represented a Christian claim that Jews were only able to see the physical reality around them, and that they were unable to “see” the spiritual world beyond the temporal. This supposedly distorted vision of the Jews threatened to mislead innocent Christian believers, and therefore, to prevent their assimilation into society, Jews were required to wear special clothing, including the infamous hat.

It is possible, of course, that the theoretical connection between the pointed hats and their real and imaginary wearers is just a fluke. It is difficult to trace the exact transmutations of such cultural representations, and pointed hats did not characterize only Jews: as early as the 12th-century, the pointed hat appeared in works of art as an identifying mark of non-Christians and those opposing Christianity. During the 14th-century, the pointed hat was also a required article of clothing for non-Jewish moneylenders in some places, or Christian women accused of having relations with Jews. From there the cultural connection between the pointed hat and more general dubious figures spread to include infidels, criminals, sorcerers, and other people accused of “non-Christian” activities. Thus, the pointed hat came to depict witches and wizards such as the legendary sorcerer Merlin from the stories of King Arthur. Herein too is woven the notion of the deceptive and misleading abilities of the wearers of the pointed hat.

Over the years, legends and folk tales became a means of entertainment for children, and the image of the dwarf was significantly refined. The blatant greed and rudeness disappeared, and in many works they became cute and kind-hearted creatures that helped human beings, or at least maintained friendly relations with them. An example of this can be seen in the little bearded gnomes who adorn many a garden. On the other hand, the pointed hat on their heads – its Jewish connection all but forgotten—remains the identifying feature of dwarfs and gnomes in collective Western consciousness to this day.

This article is based on  Naomi Lubrich’s paper: