A Bahrain Mystery in the National Library Collection

A mysterious 80 year old document which recently surfaced in our collections emphasizes the geopolitical significance of Bahrain. But what is it doing here? 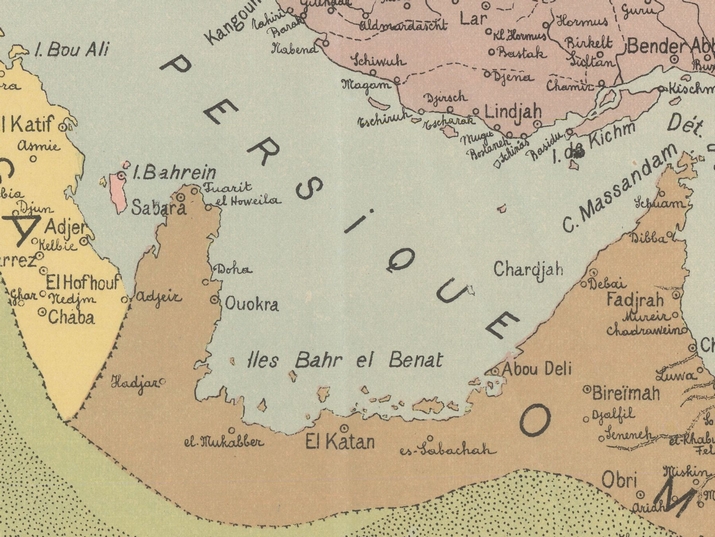 Bahrain in a First World War era map of the Persian Gulf, produced in Belgium, from the National Library of Israel collections

In October of 1940, the Italian air force launched a daring nighttime strike on the Persian Gulf state of Bahrain. Flying over 2500 miles from a base in the Mediterranean Sea, the Italian planes dropped eighty-four bombs on the country’s important oil refinery. While the government had considered the possibility that the refinery might be attacked, the fear was sabotage, not bombardment. Brilliantly illuminated at night to deter intruders on foot, it was the perfect aerial target.

While mostly forgotten today, the bombing–Bahrain’s most direct experience of World War II– thrust the island nation into the international spotlight. With rule over the territory passing between Iran, Portugal, and various Arab dynasties for centuries, Britain formalized its control in 1892. In subsequent decades, and especially after the collapse of the Ottoman Empire following World War I, the British position in Bahrain, and throughout the Gulf, seemed unshakable.

However, the Russian emigre intellectual, scholar, and political analyst Basile Nikitine saw the Italian attack as an important turning point. Sitting down at his desk in occupied Paris, Nikitine drafted an article, intended for publication in the French press, underlining Bahrain’s overlooked geopolitical significance. The islands, he wrote,

have been completely ignored by public opinion. Situated somewhere in the Persian Gulf, far from grand politics, who could be interested in them, really, aside from a few rarified specialists? However, obscure though it may be, this small point on the map of the Middle East serves as an important link in the imperial system of Great Britain. Access to India, aviation, oil, politics in Iran and in Arabia–all these elements are intertwined in Bahrain.

In the wake of the historic peace accord between Israel and Bahrain, the Gulf nation, and its ties to regional politics, has gained a new prominence in the minds of Israelis. Now is the perfect time to reconsider Nikitine’s essay–and to try to solve the riddles it contains. Never published, the text, three dense, loose-leaf pages written in French and accompanied by a pen and ink map, is preserved in the National Library archives. Who was Basile Nikitine? And how did this bit of Bahrain’s history make its way to Jerusalem?

Born in 1885 in Poland, then part of the Russian Empire, Nikitine studied Arabic, Persian, and Turkish in Moscow, Paris, and Saint Petersburg, practicing his language skills during frequent trips to the region. After graduation, he joined the Russian Foreign Ministry and spent the majority of his diplomatic service in Iran, traveling widely throughout the country. With the outbreak of the Russian Revolution, Nikitine left Tehran for Paris, pursuing a career as a scholar and writer, where he would remain until his death in 1960.

Nikitine’s scholarship focused on Kurdish language, culture, and history, and he made numerous important contributions to the field. Due to his diplomatic experience, he was also intimately familiar with modern Iranian arts and letters; his memoir, The Iran that I Have Known, recounts his friendships with the country’s leading writers and thinkers.

However, along with his academic research, from 1920 on Nikitine also wrote for the popular press. His articles covered a host of topics, from Soviet spying on the Russian emigre community, Afghanistan in international politics, Japan’s economic potential, the potato in Russian folklore, and more. Employed at the Banque Nationale Francaise du Commerce Exterieur, his freelance journalism served to supplement his income, and this extra cash only became more essential after the Nazi occupation and the installment of the Vichy regime in 1940. Nikitine remained in Paris and in his job at the bank, and continued writing for now pro-German French newspapers. 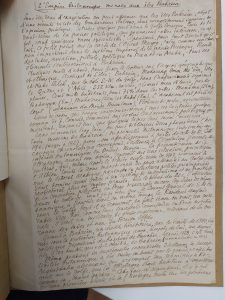 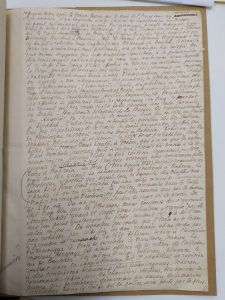 This background helps explain the character of Nikitine’s essay, written only a few months after the fall of France in June. The tone is overwhelmingly anti-British. Nikitine argued that British influence in Bahrain, and the Persian Gulf overall, was weakening and predicted the ultimate end of British supremacy in the region. The most serious challenge to the British position came in the wake of the failed Anglo-Persian Agreement of 1919, never ratified, which would have turned all of Iran into a British protectorate. Nikitine argued that this overreaching was instrumental in the 1921 coup d’etat that saw the downfall of the Qajar dynasty and brought the former army colonel Reza Shah Pahlavi to power in 1925. In the wake of the coup, Reza Shah pursued ties with other European powers; on the eve of World War II, Germany was the country’s biggest trading partner.

Against this backdrop, Nikitine saw Bahrain as a critical point of conflict. In 1927, Iran appealed to the League of Nations to assert its sovereignty over Bahrain, a claim that the British strongly rejected, saying that the island was under imperial protection. “It is well known that Great Britain always finds its ‘irrefutable’ arguments,” Nikitine wrote, dismissing the British arguments as cynical and guided by the narrow interests of securing its naval power, “above all if it sees salt water in abundance.”

This conflict over Bahrain, he continued, could spell the end of British dominance in the Gulf. “Politically, the position of Great Britain is no longer unassailable,” he wrote. Fascist Italy was seizing territory on the African coast of the Red Sea, leaving important British positions, like Bahrain, vulnerable. Nikitine predicts that “Arabia, which has been carefully maintained in the British orbit, could detach itself, especially if one considers the fact that Aden, the key to British strategy, is more and more exposed to Italian attacks.”

In the end, history did not align with Nikitine’s analysis: in August 1941, following the German invasion of the Soviet Union that June, the USSR and Great Britain jointly occupied Iran, overthrew Reza Shah, and installed his son on the throne. Britain, and later America, remained overwhelmingly influential in Iran and the Gulf for decades to come.

Nikitine stayed in Paris throughout the war and until the end of his life. There seems to be no indication that he came to Israel or was involved in the National Library in any way; this is the only document written by him in the Library’s archives. The essay likely arrived at the Library in 1962 or 1963, just a few years after the author’s death. However, the precise date is a matter of guesswork; the Library’s catalogue does not record exactly when the essay entered the collection, who donated it, or under what circumstances. The mystery of how Nikitine’s work came to Jerusalem remains unsolved.