Who Are You Calling a “Shluh”?!

Home > Jewish Communities > Who Are You Calling a “Shluh”?!
Diaspora

In modern-day Israel, the word "shluh" is sometimes used as an offensive term to describe a person of disheveled or messy appearance. The word in fact hails from Morocco, where it referred negatively to a certain ethnic group, and was used disparagingly by city dwellers to describe uncultured village folk... 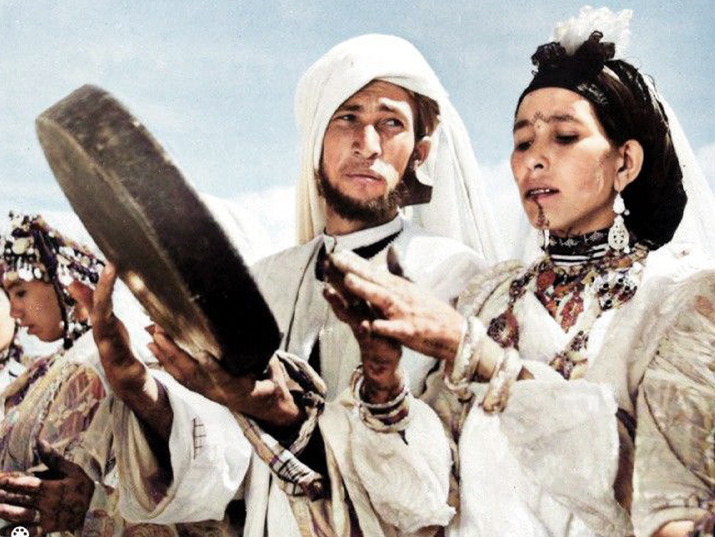 Members of a local tribe in the Atlas Mountains, 1955. Source: Tropenmuseum

The idea for this article originated several years ago when I asked my grandmother how many languages ​​she spoke. The exact number was hard to pin down since she spoke several Arabic dialects, along with French and Spanish, but I was interested in one in particular—Shluhit in Hebrew, or Shilha in English—or as it was originally called, Tashelhit. Grandmother Ladisia told me that she had learned it in order to communicate with her mother-in-law who only spoke Shilha. The name of the language immediately brought to mind the derogatory word shluh, used in Israel to describe someone of disheveled or messy appearance.

In a previous article, we dealt with the insulting and false characterization applied to residents of the city of Chelm in Poland. In this article we will delve into the story of the Shilha people, and the origins of the offensive term shluh. The word was originally imported from Morocco, where it was often used to malign an entire community, in similar fashion to what happened to the people of Chelm in Poland and also the Ḥourani in Syria.

Shilha or Tashelhit is just one of several Berber languages spoken in Morocco. The Shilha people (Shluhim in Hebrew), a Berber subgroup, live in the southwest of Morocco, where they are scattered across approximately one thousand villages that are connected through trade relations. This area also had the largest number of Jews in Morocco living in proximity to the Berbers.

The earliest record of Jews and Berbers living in proximity in Morocco dates back to the 3rd century CE, but according to the Jewish oral tradition of southern Morocco, Jews arrived in the area as early as the First Temple period, some 3000 years ago. This tradition apparently is an attempt to dispel the theory that the region’s Jews are descended from Berbers who converted to Judaism sometime in the first centuries of the Common Era. The region’s Jews instead see themselves as descendants of King David’s soldiers, who pursued the Philistines as far as North Africa, according to the local tradition, under the command of David’s general Yoav (Joab) ben Zeruiah.

As a result of the geographical proximity, the Jews and the Shilha developed informal yet close relations. It is thus no coincidence that the local Jews learned to speak Tashelhit. To this day, the Jews who lived in these communities can remember many of the proverbs, songs and customs of their Berber neighbors. The vast majority of these Jews would end up immigrating to Israel in the great immigration wave of the early 1950s, before Morocco gained its independence.

The mostly rural Shilha made a living from agriculture. The Jews, on the other hand, were considered dhimmi according to Islamic Sharia law, meaning a protected class that was barred from owning land. Therefore Jews primarily worked as merchants who would travel in small groups from their village to the surrounding areas, selling their wares and offering services. Some also financed the small farming initiatives of their Berber neighbors by buying them seeds. At harvest time, the Jewish investors were entitled to three quarters of the agricultural yield.

For over forty years, Prof. Joseph (Yossi) Chetrit conducted countless interviews with Moroccan Jews and their Berber neighbors. In an article on the simultaneously intimate yet distant relationship between the two communities, he writes that even after many decades, the Jews’ Shilha neighbors remember dozens of Hebrew expressions, such as prutim (money) and the beverage known as Mahia – a Jewish-Moroccan brandy. During the long period when they lived in proximity to each other, the Jews were commemorated as shrewd merchants in a number of Berber sayings, such as: “Jews in the market are like salt in the dough”.

But the Jews and their Shilha neighbors shared more than just economic relations. The Berbers visited the same Jewish gravesites the Jews flocked to during traditional hilulah celebrations commemorating the passing of Jewish holy figures. Jewish healers frequently received their Shilha neighbors who were not afraid to make use of their mystical charms, amulets and potions.

The Jews and Shilha also shared common customs and would dance and sing together at public ceremonies. While the Jews of the region avoided taking part in Berber customs related to the Muslim faith, both groups were well acquainted with each other’s calendars. Besides greeting their Jewish neighbors with the words “happy holiday” (hag sameah) or “easy fast” (tsom kal), the multitude of holidays and festivals created many economic opportunities. Before the Sabbath and ahead of Jewish holidays, the Shilha would sell agricultural products to Jews as well as the reeds needed to build the sukkah, while the Jewish women marketed their seamstress skills to their Muslim neighbors as they prepared for their own festivals.

Cooperation between Jews and Muslims was especially noticeable in the days leading up to the Mimouna celebration. During the Passover holiday, Jews would bring offerings to their Muslim acquaintances; including matzoh, pies, and sometimes a meat stew, and in return, the Muslims brought the Jews milk, butter, honey, eggs and flour, the ingredients necessary for the preparation of the Mimouna delicacies.

So how did a group as diverse and productive as the Shilha come to be associated with a disparaging epithet meaning a disheveled person who cannot be trusted? This offensive term that referred to rural Muslims and Jews alike was brought to Israel by immigrants from Morocco.

In 1931, the French-language Jewish newspaper L’Avenir Illustré (“The Illustrated Future”) published an article by Charles Abehsera of the city of Rabat in its Jeune Israel (“Young Israel”) section. Abehsera wrote about the rural Jewish migrants flooding his city, referring to one of them as a “shluh.” In the article, Abehsera described the individual as an old Jewish man making a living from handouts and tourists who paid him a small sum to take his picture. Another thing that bothered Abehsera was the fact that this “shluh” accepted alms on Shabbat, in violation of Jewish religious law.

Abehsera, a young representative of the Western Moroccan Jews, distanced himself from the “shluh”, whom he viewed as a dirty and undesirable individual who spoke neither Arabic nor French, but only the Berber language. The “Young Israel” section of L’Avenir Illustré was read by the Jewish youth in Morocco who typically received a French education in the Jewish Alliance schools. These young boys and girls spoke French and identified with European Western values more than with traditional Moroccan values​.

Abehsera certainly did not invent the term “shluh,” but he used it to differentiate himself and his community from the newcomers who were moving into the city from the rural areas. Incidentally, the word “Berber” also stems from a pejorative term. The Berbers call themselves “Amaziye’im” (“Imaziye’in” meaning “freemen”). However, the word Berber derives from the ancient Greek word Barbaros (βάρβαρος), which the Greeks used to refer to anyone who did not speak Greek.

Regardless of the young Abehsera’s views and the desire of many of Morocco’s urban Jews to differentiate themselves from the Berber-speaking Jews, it is important to understand that until the Jews left Morocco, half of the country’s population (Muslim and Jewish) spoke Berber as a first or second language. After Morocco’s independence and the introduction of a state education system, this number dropped to about 30 percent. Most of the Berber-speaking Jews spoke the Tashelhit dialect, and for some (for example the people of Tifnit in the Souss Valley region) Tashelhit was their mother tongue at least until the French occupation. The French protectorate’s road-building efforts connected the villages to the larger cities, which led to the migration of rural populations to urban centers. The slanderous label was an outcome of the city folk’s encounter with the villagers.

The complex relationship between the Jews and their Shilha neighbors is an important part of the story of Moroccan immigration to Israel, just as it is part of Morocco’s history. The two groups not only lived side by side in the same villages for perhaps thousands of years, but also shared beliefs and customs, such as veneration of local saints, folk medicine and a whole repertoire of Berber song, dance, folk tales and sayings. Therefore, the dismissal of Shilha culture and the disdain towards it — which began already in Morocco — serve to undermine a significant element of North African Jewish culture.

Despite the complex and delicate relations that existed between the neighboring populations, the Jews and Berbers have come to embrace their common past. The Jews’ departure from Morocco severely impacted the Berber and Shilha rural economy for years. Before the establishment of formal relations between Israel and Morocco, nostalgia for these bygone relations led to the idealization of Jewish life in the villages and towns in Morocco in the past. Today, with travel to Morocco now possible, Israelis of Moroccan origin can see for themselves the living conditions in the villages and renew the ties forged over the generations between their ancestors and the Amaziye’in.

Thanks to Prof. Joseph (Yossi) Chetrit and Dr. David Guedj for their help in preparing this article.