A Chronicle of Humanity: From Creation to the Year 1492

Home > Germany > A Chronicle of Humanity: From Creation to the Year 1492
Diaspora

Among the National Library of Israel’s treasures is a book that changed the face of the nascent printing industry, by incorporating spectacular woodcuts alongside the text. Written by Hartmann Schedel, the book systematically describes the history of the world and of the human race, while also documenting antisemitism over the centuries 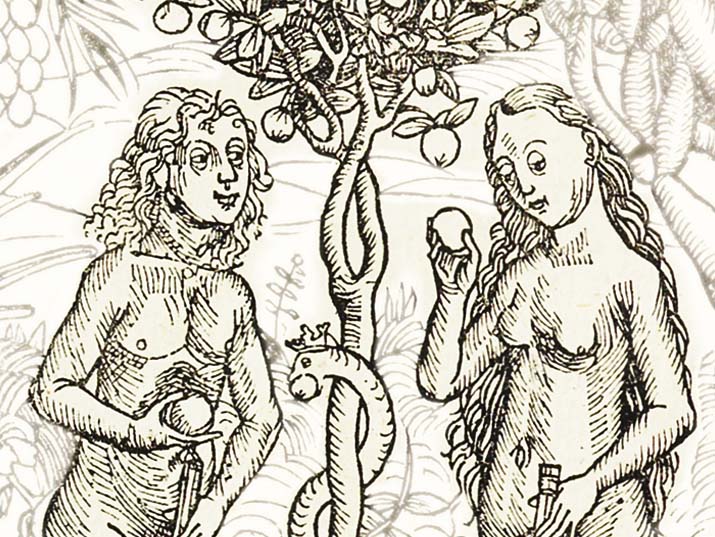 Adam and Eve, the Tree of Knowledge and the serpent, the Nuremberg Chronicle

About forty years after Johannes Gutenberg invented the printing press, a book was printed in the city of Nuremberg the likes of which had never before been seen.

This was in fact a chronicle, describing the history of humanity from the creation of the world up until the year 1492. In the late Middle Ages, this type of chronicle was a very popular genre, and the various printing houses across Europe printed quite a few of them. However, a number of features made the Nuremberg Chronicle unique among its brethren. For starters, the book’s physical dimensions were remarkable – it measured 49 centimeters in length and 32 centimeters in width. In addition, the chronicle’s 290 pages featured 1,800 woodcut images, which appeared alongside the text.

This was the first book in the history of printing to combine text and image to such a degree, which lends it something of a “modern” appearance, even in our eyes, despite the chronicle having been printed more than 500 years ago. The expenses invested in its production superseded all other “incunabula” (a term referring to books printed between 1450 and 1500).

What was the idea behind this complex and costly project?

At the end of the 15th century, the German Free Imperial City of Nuremberg (meaning it was subordinate only to the Holy Roman Emperor), was considered a metropolis, with more than 30,000 inhabitants, including some 300 Jews (who were expelled from the city in 1498). It was also a center of international trade and home to some extremely wealthy merchants. Two of these, who apparently were also very well educated persons, approached the city’s physician, Hartmann Schedel, around the year 1487, with a commission to write the work. Schedel, himself a learned man who had acquired his medical training in Italy, and who possessed a private library containing some 1,000 books, apparently relied heavily on his own book collection in completing the monumental task, in particular an earlier chronicle published in Italy. Schedel slightly changed the perspective of the historical narrative, however, focusing primarily on events that took place in Central Europe, alongside other major events in the continent’s history.

Aiming to appeal to a scholarly readership across Europe, Schedel composed the work in Latin; however, because the final sections of the book focused on German history, a German translation was published as well. The chronicle also mentions a number of historical events of anti-Jewish background, including expulsions of Jewish communities from cities in Europe, pogroms, and even the unfortunate affair of the “murder” of the boy Simon of Trent (modern-day Trento in northern Italy) in 1475, for which the city’s Jews were blamed.

During the writing of the text, the commissioners of the work also approached the Nuremberg artists Michael Wolgemut and Wilhelm Pleitgen to create woodcut illustrations of historical figures, prominent events, and panoramic views of large and well-known cities. The images of the urban landscapes of European cities are considered relatively authentic, and some of the buildings depicted in them (such as various churches and gates) survive to this day. At the time, a little known apprentice by the name of Albrecht Dürer was employed in the workshop of the two painters and may have supplied a number of the woodcuts for the book, but there is no scholarly consensus on this. Years later, Dürer, who was by then a renowned artist, painted a portrait of his teacher Wolgemut, who had given him his professional start.

We know who the author and the illustrators of the chronicle were, but who was the printer?

The famous Nuremberg printer Anton Koberger operated a large printing house that employed about 100 typesetters, printers, and other professionals, and published more than 250 titles. Koberger was promised a respectable sum for this particular job, and in 1493, he set his press to work on the project. In all, 1,400 copies were printed in Latin, and another 700 in German. Accounting receipts and documents preserved to this day reveal the scope of the book’s dissemination across Europe, which was sold from Danzig to Florence and from Paris to Krakow. The papers, kept in various European archives, tell the entire backstory of this enterprise, and it is only through these records that we know the identity of the author, whose name does not appear even once in the book.

Despite the marketing efforts, the project was not a great success. More than ten years after it was printed, hundreds of unsold copies were still sitting in the publisher’s warehouse. With no copyright laws in place back then, rival printers often printed their own editions of books, which was also the case here: a “pirate” edition was printed in the nearby city of Augsburg, which adversely affected sales.

There are many extant copies of both the Latin and German versions of the Nuremberg Chronicle produced in Anton Koberger’s printing house. The National Library of Israel possesses four copies of the Latin edition and one copy in German. It is possible that the work’s beauty and size are responsible for the survival of so many copies; its historical and artistic value abundantly clear, even to viewers today.

Browse through the Nuremberg Chronicle, here.