What Did ‘America’s Freud’ Think About Hitler? 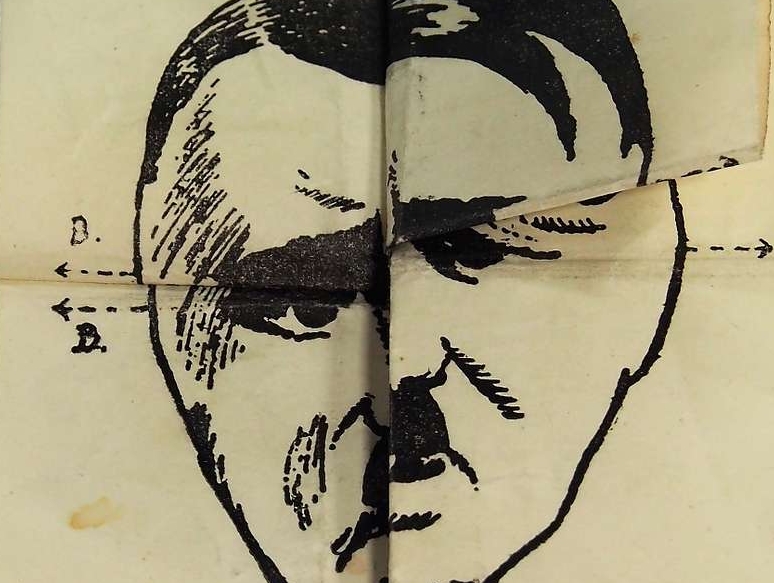 Though many if not most leading psychoanalysts at the time were German-speaking Jews, they offered very few public attempts to psychologically analyze Hitler. (Image: Dutch anti-Hitler propaganda, ca. 1940s / Public domain)

“Himself a homosexual, the Reichskanzler was to burn the books of Magnus Hirschfeld (who may have known too much) and exile him from the country.”

These words were published in 1935, two years after Adolf Hitler assumed the position of Reichskanzler.

They were written by Dr. W. Beran Wolfe, the Austrian-born Jewish psychiatrist known as “America’s Freud”. Wolfe was also a musician, prize-winning sculptor and best-selling author of books with captivating titles like How to Be Happy Though Human, Calm Your Nerves, and A Woman’s Best Years. Born in Vienna, he had moved to the United States as a young child.

After completing medical school and serving in the US Navy, Wolfe returned to the city of his birth for post-graduate work under the renowned psychiatrist Dr. Alfred Adler. Wolfe would serve as Adler’s assistant, translating and editing many of his works in English.

While assertions that Hitler’s repressed sexual preference for men may have directly influenced his behavior and decision-making have been explored ever since his dramatic rise to power, it is certainly not accepted fact that he was gay. Both during his lifetime and more recently, these types of allegations have been used to disparage both Hitler and homosexuality.

Tucked into his thousand-word editorial piece entitled “Germany’s Nervous Breakdown“, Wolfe’s statement appears as fact, not opinion. It does not seem to be written with any sensationalistic intentions; but rather simply to serve as a descriptive element provided by a respected expert trying to make sense of Nazi Germany and its leader.

Wolfe’s stance on homosexuality – expressed in other writings – would be controversial by today’s standards, yet he nevertheless volunteered a rare public psychoanalysis of the Reichskanzler just two years after Hitler took power.

Allegations of homosexuality at the highest levels of Nazi leadership were nothing new in 1935. Just a year before, Hitler had ordered the extrajudicial execution of hundreds of members of the Sturmabteilung (SA), the Nazis’ paramilitary organization, in what is known as “The Röhm Purge” or “The Night of the Long Knives”. Its leader, Ernst Röhm, was an openly gay man rumored to have had a special relationship with the Führer. Röhm was allegedly allowed to call Hitler by the pet name “Adi” as opposed to the obligatory “Mein Führer”.

In one report after Röhm’s execution, he was eulogized as Hitler’s “boon companion“.

Hitler had defended Röhm’s appointment as leader of the SA just a few years before the purge, calling talk of his sexuality “irrelevant and absurd”, notes historian Andrew Wackerfuss in his 2015 book Stormtrooper Families: Homosexuality and Community in the Early Nazi Movement.

According to Ian Kershaw’s monumental biography of Hitler, at the time of Röhm’s appointment, the Führer rejected criticism of “things that are purely in the private sphere” and stressed that the SA was “not a moral establishment”. Nonetheless, after “The Night of the Long Knives”, Hitler and the Nazi propaganda machine emphasized the homosexuality of many of those who were executed, seeing it as a blemish on the “pure” movement and society they aimed to create.

Over the decades, countless books, first-hand accounts, studies, satirical works and even a recently declassified CIA report, have alleged in one way or another that Hitler had homosexual tendencies. Psychoanalyst Norbert Bromberg summarizes a number of them in his book Hitler’s Psychopathology, including the fact that both Röhm and Rudolf Hess, another prominent Nazi figure who was known to cross-dress and to be referred to as “Fraulein Anna”, were allowed to use the personal form “Du” with the Führer.

Bromberg also notes a number of unsubstantiated allegations that Hitler engaged in pederasty during World War I, and that he had a portrait of his young male chauffer commissioned and installed in his Berghof residence in a similar manner to the portrait of his own mother.

Magnus Hirschfeld, “who may have known too much” according to Dr. Wolfe, was one of the world’s foremost sexologists, and an early activist on behalf of sexual minorities. He also happened to be gay, Jewish and German.

On a speaking tour when SA troopers stormed his renowned Institute of Sexual Research in Berlin, confiscating books and records to be burned, Hirschfeld was never to return to Germany. It is alleged that his archives contained files specific to Hitler and his sexual propensities.

Freud and Friends on Hitler

With many if not most prominent psychoanalysts of that time being German-speaking Jews, it frankly seems quite surprising that there were not more public attempts to psychologically analyze Hitler. Freud did not venture to do so, perhaps in order to protect himself and his family. Though his books were burned soon after the Nazis took power, Freud was placed under “protective custody” once they came to Vienna.

Singled out by an Austrian Nazi paper as one who would be dealt with in a “more radical” and less expensive manner than being sent to a concentration camp, Freud nonetheless chose not to flee to England until mid-1938. He made that decision much later than many and only after his daughter had been picked up by the Gestapo and family and friends undertook considerable efforts to persuade him to leave.

Even once Freud was in England, he avoided questions related to Hitler and Nazism, which five years prior he had predicted “may not come out too bad”. Nevertheless, many drew natural conclusions between Freud’s teachings and Hitler’s behavior, with Wolfe claiming that the teachings of the father of psychoanalysis “point uncomfortably to the psychosexual infantilism” of the Führer.

Wolfe’s mentor, Dr. Alfred Adler, was another Vienna-born Jewish psychiatrist and one of Freud’s most prominent thought partners. The two famously disagreed both personally and intellectually on a variety of issues, with Adler considering sexuality an important element in the development of the individual, but less omnipotent than in Freud’s view.

Adler coined the concept of the “inferiority complex” and emphasized the importance of the individual. Over the years a number of scholars have quite naturally applied Adler’s teachings to explain Hitler’s “overcompensation”. Adler does not seem to have ever publicly discussed Hitler’s psychopathy or alleged homosexuality, a phenomenon which he believed was the result of feelings of inferiority.

Though they all escaped Nazi-occupied Europe, neither Freud, Hirschfeld, Adler nor Wolfe lived long enough to witness the horrors of World War II and the Holocaust. Freud was already sick when he fled to England. He died a few weeks after the Nazi invasion of Poland. Hirschfeld died of a heart attack in his adoptive home of Nice on his 67th birthday in May 1935.

Adler and Wolfe also both died unexpectedly, if not under mysterious circumstances.

The elder was on a speaking tour in Scotland when he suddenly dropped dead two years after Hirschfeld, also apparently of a heart attack. His cremated remains went missing and were not found until seven decades later.

Just a few months after explicitly calling Hitler a homosexual in print, Wolfe died in a car crash in Switzerland at the age of 35. A lengthy eulogy appeared on page 2 of the next day’s New York Times.

Though these four prominent figures did not live to see the full, devastating implementation of Hitler’s designs, it is hard to imagine that as the Nazis rose to power – persecuting friends, family and colleagues – they and other leading German-speaking Jewish psychoanalysts would not have tried to delve into the causes of Hitler’s behavior.

With very little left on record, it seems that the inner thoughts of men like Freud and Adler will remain conjectural, like the motivations of a hateful tyrant whose words and actions ultimately led to inconceivable brutality, suffering and loss.