In 1882, the young Prince George, later King George V, joined his brother on a tour around the world, recording his impressions of the locations he visited - including the Holy Land. 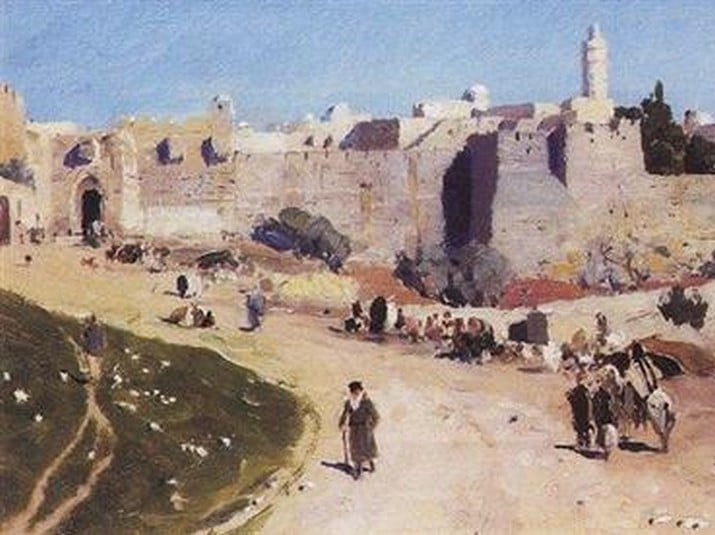 Jaffa Gate and the Citadel. Jerusalem from the west as Prince George probably saw in 1882. Oil painting by Vasily Polanov from 1882.

“… Its children [of the Land of Israel] will come here from all over the world, and a new Jewish Nation will be resurrected in the Holy Land …” – Prince George, the future King George V, supposedly wrote  in his diary, during his visit to Jerusalem in the spring of 1882.

This quote attributed to the future ruler of the United Kingdom was published as part of Yakir Warszawski’s article in the Yiddish newspaper “Di Presse” on April 23rd, 1948, in Buenos Aires, Argentina. Although the author passed away in 1942, his article was published as an allusion to an event that was to take place in three weeks: the declaration of the State of Israel on May 14th, 1948.

Thirty-one years before his coronation, young Prince George joined his elder brother, Prince Albert Victor (Eddy), who was serving as junior officer aboard HMS Bacchante.” Together, they toured much of the globe. In March 1882 the royal siblings reached Egypt and from there they made their way to what was then Ottoman Palestine. During the voyage, Prince George also  became a junior naval officer. He began keeping a private diary in 1878, recording his time on the tour.

The unofficial visit of Prince George and his brother to Jerusalem, including their participation at the Passover Seder held at the home of the the Sephardi Chief Rabbi Raphael Meir Panigel, is also documented in the Hebrew booklet “The Visit of the Princes of England in Jerusalem” (Hebrew) written by the famous writer and scholer Pinchas Graiewski (1873-1941) together with Baruch Priver.

“… Mr. Nissim Bekhar, the principal of the Alliance Israélite Universelle school, translated the Haggadah for them all and explained the rituals. The guests were moved by the ceremony, listening to every word and every whisper, paying attention to every custom with great interest until the reciting of ‘Ga’al Yisrael’… On their return to London, their father sent a letter of thanks to the Rabbi, accompanied by a souvenir picture of himself. “

Prince George documented this emotional event in his personal diary as well. His diaries received special attention in the book “King George the Fifth – his Life and Reign”, a biography written by Harold Nicholson published in 1953. However, other than the visit to the Land of Israel, Nicholson’s book contains no reference to the Passover Night spent at the home of the Chief Rabbi. In fact Nicholson notes in his work:

“They went up the Nile as far as Luxor and the month of April was spent on a tour of the Holy Land. Prince George was not impressed by the stories related to him by the local guides: ‘All the places’, he wrote on April 20, 1882, ‘are only said to be the places”.

All of King George V’s diaries, written between 1879 and 1936, were officially published by his granddaughter, Queen Elizabeth II, in 2005. The Queen approved the reading of the diary over several days on the British radio station, Channel 4. Craig Brown of The Telegraph wrote on 31 June 2004: “…The advance publicity proudly trumpeted it as a major exclusive; up to now, King George V’s diaries had not seen the light of day.”

Sections of the diaries of Prince George and his brother Prince Albert had in fact been published already in 1886 in the book “The Cruise of Her Majesty’s Ship ‘Bacchante’ – 1887-1882”. Warszawski, who apparently relied on the above book, quoted Prince George’s diary as follows: “Around 6:30 in the evening we went to Passover Seder at the house of Sephardic Rabbi Rafael Meir Panigel, an old man with a white bonnet and a long coat that he wore over other clothes. There we also met a second old man, Rabbi Nissim Baruch [Apparently referring to Nissim Bekhar, the director of the Alliance Israélite Universelle school mentioned by Graiewski and Friver in their booklet]. (The Yiddish text of Warszawski’s quotations is not an exact translation of the respective English text in the book published in 1886).

Warszawski notes that the future King repeatedly mentioned his visit to the Holy Land in his diary. This is the text of his quote:

“… I moved from the Temple to the Western Wall, where the Jews pray to God. I saw the presence of the Divinity, which seemed to me like a seagull spinning in a storm in the form of lightning.
(..)
At the Seder table I heard verses from the Passover Haggadah which is the story of the Exodus from Egypt, a story about a people who came through the hot desert to the Land they remember until this day; It’s children will come here from all over the world and a new Jewish nation will rise in the Holy Land. “

(These quotations in Warszawski’s article do not appear in the compiled diaries and letters published in London, 1886).

It is no wonder that Yakir Warszavski’s writing, despite that fact that he died in 1942, was published on the eve of Passover in 1948, about four months after the UN General Assembly’s historic vote approving the Partition Plan, and about three weeks before the declaration of independence of the State of Israel. Apparently, the editor of the Yiddish newspaper “Di Presse” sought to link two historical events: the Exodus from Egypt and the Eve of Passover prior to the establishment of the State of Israel, with a Passover stopover in the Land of Israel in 1882, taking it as a sign of British support for the gathering of the Jewish Diaspora, at a very early stage of  the modern Jewish settlement enterprise in the Land of Israel.

Yakir Warszawski’s article is part of the Zvi and Lea Schwarz Archive at the National Library of Israel. The Schwarz’s were the publishers of the Yiddish monthly “Shriftn” in Buenos Aires.