The desert was pushed back, the swamps were dried up and water reached every corner of the land - this historic map celebrated 50 years of the Zionist enterprise… 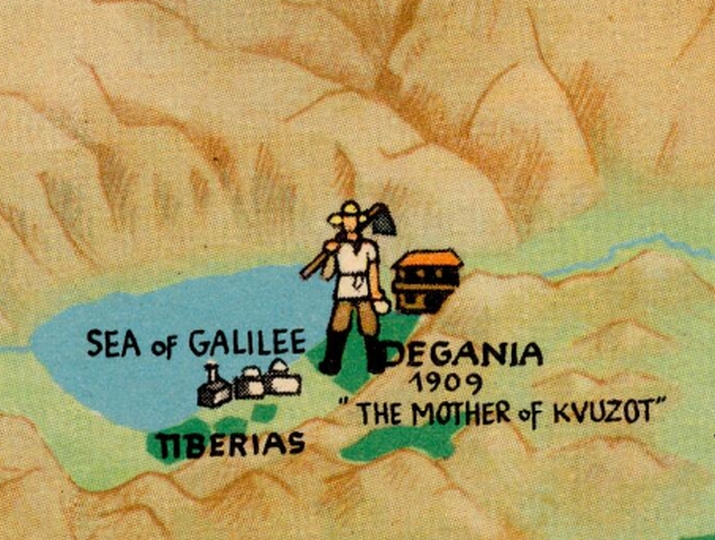 To mark the jubilee of the Zionist Organization, a pictorial map was published by the Jewish National Fund in 1947. It surveyed 50 years of Zionist settlement and development of the Land of Israel. Edited by Ernst Mechner, and designed by S.F. Loeb, the map was issued in three editions: Hebrew, English and Yiddish.

The Zionist Organization, established at the First Zionist Congress in Basel in 1897, the Palestine Office and its successor the Jewish Agency, Keren Hayesod, which coordinated the collection of donations for the development of the country, and the Jewish National Fund, all assisted over the years in purchasing land and establishing Jewish settlements in the Land of Israel. In this map, summarizing the work of these bodies between 1897 and 1947, the editor chose to highlight the sites that in his view constituted milestones in the timeline of settlement of the Land of Israel.

For example, “Degania 1909 ‘The Mother of Kvuzot’” – Degania was the first Jewish communal settlement to be established in the Land of Israel.

The swampy marshlands of the Jezreel Valley which appear in the illustration above should be taken with a grain of salt. We know that swamps characterized some settlement regions, such as the area south of Zichron Yaacov (the Kabara swamps), or the area around Hadera, but in the Jezreel Valley swamplands represented only a minimal percentage of the area, as can be seen for example in the article, The Swamps of Emek Yizre’el (Jezreel Valley) – Myth and Reality, by Yoram Bar-Gal and Shmuel Shamai. The association of swampland with the Jezreel Valley reinforced the idea of the redemption of desolate land and its transformation into flourishing settlements, and it seems that in this map that message took precedence over geographical-historical accuracy.

Water sources were a necessity for settlement: special effort was invested in a water carrier system to provide water for both drinking and agriculture purposes to the Negev; to illustrate the immensity of this Zionist project, the pioneer on the map is depicted as a giant.

The map includes eighteen figures of pioneers, three of them women. 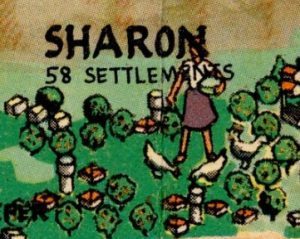 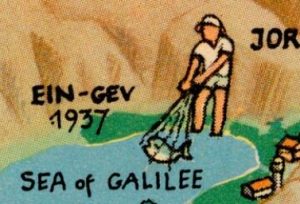 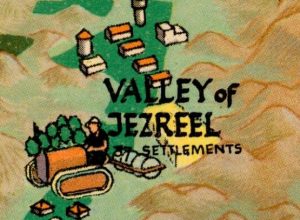 An epigram by Herzl is printed on the back of the map: 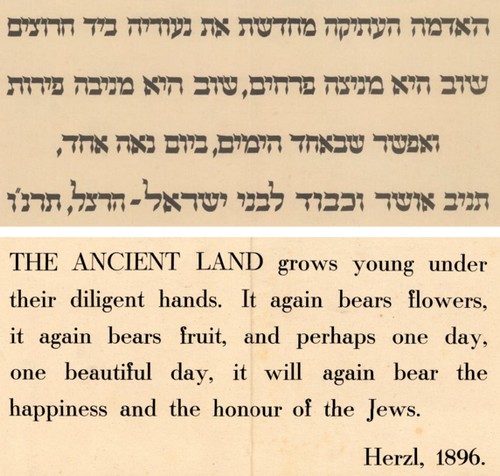 Besides serving as a summary and documentation of the past, the colorful, trilingual editions of this map served the Jewish National Fund as a means of fundraising for the Zionist institutions, as they continued their efforts to purchase land and develop the country.