When Tintin Was Abducted by the Irgun in Haifa

Why was Mandatory Palestine changed to the imaginary "Emirate of Khemed" in "Land of Black Gold", the 15th volume in the comic series, "The Adventures of Tintin"? 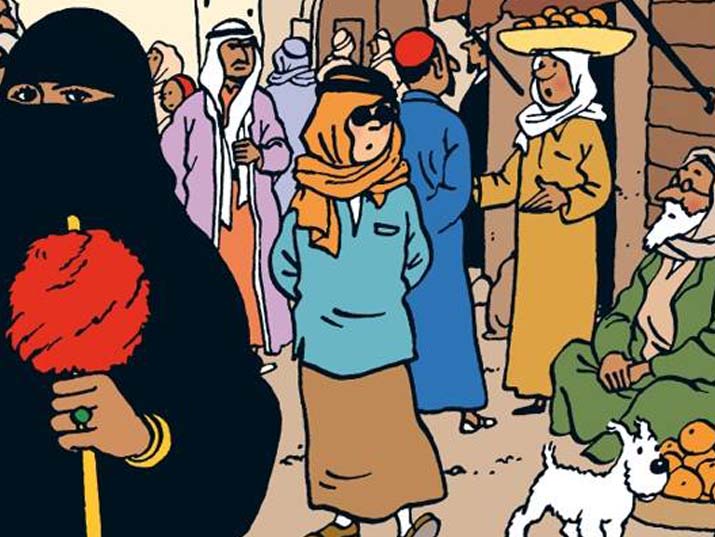 “Residents of the Land of Israel, be on the alert: a Belgian citizen with a tendency for trouble has been spotted in Haifa disguised as an Arab. The individual calls himself ‘Tintin.’ He is known to be sniffing around where he shouldn’t and asking far too many questions. Anyone with any information regarding his whereabouts is requested to notify the police.”

The above was not a public safety message issued by the Israeli police or the Shin Bet, rather, this was a fictional scene that played out in the world-famous and beloved comic book series, The Adventures of Tintin. This particular story in the Tintin series, Land of Black Gold, was first published in serialized form between September 1939 and May 1940.

The story revolves around a secret plot to sabotage oil reserves in the Middle East. In keeping with the times, the identity of the story’s villain is revealed as none other than the evil German physician, Dr. Müller. As part of Tintin’s investigation, our hero makes his way to British Mandatory Palestine, where he wanders the streets of Haifa dressed as a local Arab. He is even kidnapped by the Irgun, the Jewish underground organization which fought both the Arabs and the British.

Hergé, Tintin’s creator, drew the story’s first comic strips while on a month’s leave from the Belgian army. He was drafted into the military when Germany invaded Poland on September 1, 1939, but even as a soldier, he continued sending the comic strip installments to Le Petit Vingtième, the newspaper that had been publishing the illustrated adventures of the young reporter for the past decade. After contracting sinusitis, Hergé was released from his military service on the same day Germany invaded Belgium.

Naturally, under the new circumstances of German occupation and given the villain’s German nationality, the series was discontinued, and readers following Tintin’s adventure as a respite from the terrible war erupting around them had to wait several years to find out how the young man managed to escape the deadly sandstorm after evading the clutches of the evil doctor.

After the conclusion of World War II, Hergé initially sought to distance himself from his popular character, but pressured by his wife and friends, he soon returned to drawing the adventures of the curious investigative reporter. The original plan was to send Tintin and his dog Snowy to the moon, which indeed happened later on, but first, he resumed the adventure he had left unfinished when the Nazis invaded his country.

The second serialization of Land of Black Gold was published between 1948 and 1950. Importantly however, this was not the final version…

In the 1960s and 1970s, The Adventures of Tintin were introduced into Great Britain. It is not clear exactly what motivated Tintin’s legendary creator to redraw Land of Black Gold, but this time it took a surprising turn. In the English version of the beloved comic, Mandatory Palestine became the imaginary “Emirate of Khemed”. The story of Tintin’s abduction by the Irgun due to a mistake in identification—the story that appeared in the original version—was replaced by a tale involving the military police in Khemed.

Let there be no doubt, Tintin— among the bravest of all illustrated detectives—had no qualms about becoming embroiled in our local war of narratives. Yet that was not the reason for the change. The substitution of historical Mandatory Palestine with an imaginary oil-rich principality, was probably done to avoid offending the British readership Tintin’s creator was hoping to attract.

Sadly, regarding Land of Black Gold – neither the version which takes place in the Land of Israel nor the version featuring the imaginary land of Khemed were ever translated into Hebrew…