For four years, Menachem Begin was a man underground, in the fullest sense of the word—a commander of an underground force and a wanted man, hiding from the British. After Israel’s declaration of independence, Begin came out of hiding with a historic speech that transformed him into a national political figure. 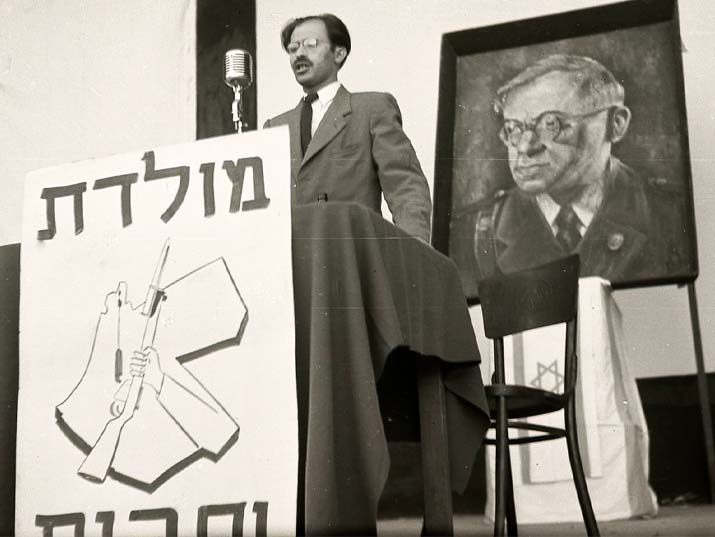 Menachem Begin speaking at a Herut Party event. Photo: Beno Rothenberg, from the Meitar Collection, the National Library of Israel

The events of the 5th of Iyar (May 14th) 1948, the day on which the State of Israel declared its independence, are well known: the reading of the Declaration of Independence by David Ben-Gurion in Tel Aviv, the signing ceremony, and the thousands who danced in the streets, are an integral part of Israeli collective memory. But what happened on the next day, the first full day of the new state’s independence, while perhaps overshadowed by the outbreak of the War of Independence, was of no less historical consequence.

Citizens of the Hebrew Homeland, Soldiers of Israel, Hebrew Youth, Sisters and Brothers in Zion!

After many years of underground warfare, years of persecution and moral and physical suffering, the rebels against the oppressors stand before you, with a blessing of thanks on their lips and a prayer in their hearts. The blessing is the age-old blessing with which our fathers and our forefathers have always greeted Holy Days. It was with this blessing that they used to taste any fruit for the first time in the season. Today is truly a holiday, a Holy Day, and a new fruit is visible before our very eyes…

We therefore can say with full heart and soul on this first day of our liberation from the British occupier: Blessed is He who has sustained us and enabled us to have reached this time.

Since February 1944, and the publication of his first proclamation as commander of the Irgun (the right-wing Jewish paramilitary organization whose policy was based on the Revisionist Zionism of Ze’ev Jabotinsky), Menachem Begin had been underground, in every sense of the word. Not only was he in command of an underground movement (since December 1943), but he was also forced to hide from the British after calling for an all-out war on British Mandate rule. Begin remained in hiding up until the first full day of Israel’s independence. Then, on the evening of Saturday, May 15th, Begin gave a special speech on an underground radio station. With this speech, he not only emerged from the underground, but dismantled it altogether. Well, except for the Jerusalem faction, but that’s another story… This step was of immense importance given the political situation, with the outbreak of the War of Independence and the demonstrated lack of cooperation, if not outright hostility, that prevailed among the Irgun, the Lehi, the Haganah, and the Palmach – the various Jewish military organizations.

With the end of the mandate that expired on May 15th, 1948, the days leading up to the British withdrawal from the Land of Israel were full of uncertainty. Even the date of the declaration of the state was in doubt, since the United States had sent a clear message calling for a ceasefire as well as talks on the nature of the future governing of the region. Inside the territories of the designated state, doubt was also cast on the strength of Jewish military power in the face of the Arab states’ threats of invasion and the already burgeoning war in other parts of the country. The need for a single, regular, and orderly army that would be subject to the new interim government was obvious, but first, the situation with the underground paramilitary forces of the Irgun and the Lehi had to be resolved. Unfortunately, relations between the commanders of these underground groups and the leaders of the mainstream Jewish political organizations were problematic, and the years-long intense hatred between the different factions had infiltrated into the ranks. All of which raised concerns about the ability to establish a functioning army in such a short time and under so much pressure, even though the military infrastructure in the form the Haganah, which was strongly associated with the ruling elite of that period, was at the ready.

Begin began the speech on the underground’s Kol Haherut radio as the commander of the Irgun, but ended it as the leader of the opposition, at least temporarily. As befitting the moment and in light of the war, he chose the path of the common good of the people—he backed the government, called for unity, and swore allegiance to the state.

Knowing the move might weaken him politically, but understanding the magnitude of the hour, and in view of the real threat to the newly established state, Begin chose to do what was in its best interest. However, he also felt it was his duty to acknowledge the work of the underground movement: “It took generations of wandering from one land of slaughter to another country of pogroms . . . the toil of generations of pioneers and builders, the uprising of rebels, the crushers of enemies, people sent to the gallows, and wanderers over deserts and across seas—for us to reach where we are today.”

Begin, known even back then for his dramatic speaking style, began with a pathos-filled description of the state of affairs in the newly founded State of Israel. In the second part of the speech, he spoke of the brains and the brawn that would be required to win. In the third part of the speech, he outlined the foundations of Israel’s future foreign policy, including absorption of widespread immigration. Begin did not sidestep the difficulties but confidently sketched the new state’s ability to address them. The next part of the speech was devoted to the justice to which the state should aspire.

And within our Homeland, justice shall be the supreme ruler, the ruler over all rulers. There must be no tyranny. The Ministers and officials must be the servants of the nation and not their masters. There must be no exploitation. There must be no man within our country—be he citizen or foreigner—compelled to go hungry, to want for a roof over his head or to lack elementary education. ‘Remember you were strangers in the land of Egypt’—this supreme rule must continually light our way in our relations with the strangers within our gates. ‘Righteousness, righteousness shall you pursue’ will be the guiding principle in our relations amongst ourselves.

After laying the foundation, Begin came to the real purpose of his speech—dismantling the Irgun inside the borders of the new state (with the exception of Jerusalem). Begin announced the acceptance of one state and one army under the authority of the Hebrew law—the concept of the rule of law, as befitting a democracy.

It is for these goals and principles, and in the framework of democracy, that the Herut Movement will struggle, arising out of the underground and fashioned by the fighting family, a movement made up of all circles, all exiles, all streams around the flag of the Irgun. The Irgun Zvai Leumi is leaving the underground inside the boundaries of the Hebrew independent state. We went underground, we arose in the underground, under a rule of oppression in order to strike at oppression and to overthrow it. And right well have we struck. Now, for the time being, we have a Hebrew rule in part of our homeland. And as in this part there will be Hebrew Law—and that is the only rightful law in this country—there is no need for a Hebrew underground.

The reward for the willingness to head into battle, in Begin’s eyes, was the existence of an upright and secure Jewish state, where Jewish children could grow up in an independent country of their own, as in the days of yore. He concluded his speech with a personal prayer, seen below.

God, Lord of Israel, protect your soldiers. Grant blessing to their sword that is renewing the covenant that was made between your chosen people and your chosen land. Arise O Lion of Judea for our people, for our land. On to battle. Forward to victory.

Two weeks after the declaration of independence, Begin announced that he had signed an unofficial agreement with Ben-Gurion, and referred to the Israel Defense Forces as “the united forces.” The IDF was established on May 31st, 1948, and on June 1st, 1948, Begin signed an agreement with Yisrael Galili, a representative of the provisional government, which began the disbanding of the Irgun and its integration into the IDF. The agreement stipulated that the Irgun’s operations would cease to operate “as a military brigade in the State of Israel and in the territory of the Government of Israel.” As mentioned, the Irgun preserved its independent status in the blockaded city of Jerusalem because it was not part of the State of Israel at the time and the agreement referred only to state territory.

Begin’s historic speech dismantling the underground and calling for loyalty to the state and its army, was an important step, albeit a preliminary and mainly declarative one. Begin of course meant every word of his speech, but the actual implementation was much more difficult and complicated. Begin’s speech marked the beginning of a new chapter in his life as a political leader, who, eventually, after twenty-nine years in the opposition, would became the first Likud Prime Minister.

The speech was not only broadcast on the Irgun’s Kol Haherut radio, but was also disseminated in print, in a small pamphlet distributed to the fighters. A copy of “The Speech of the Supreme Commander of the Irgun to the People in Zion” is preserved at the National Library of Israel. While it is unclear how this particular copy entered the collection, it was apparently a very personal one: at the end is a handwritten list of items that includes a lamp, coat, shirt, books, and papers. We do not know its purpose, but perhaps the writer was hoping to buy these items or pack them away, maybe to furnish a new apartment, after finally leaving the underground, and coming out of hiding.