The Children of ’73 Write About the Yom Kippur War

Letters written by Israeli children during the 1973 war reveal how they experienced one of the nation's most challenging periods. 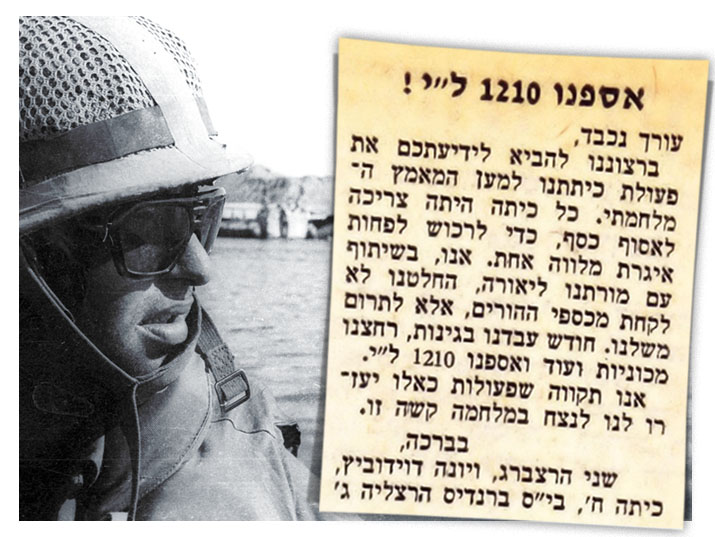 Photo by Eli Landau, the Dan Hadani Collection, the Pritzker Family National Photography Collection at the National Library of Israel

Today, forty-seven years after the Yom Kippur War, they are well into their fifties and sixties. Back then, in the fall of 1973, they were only schoolchildren, young boys and girls. To find out what they remember from that time, we can simply ask them, most are still with us. To know what they felt and thought in real time, when the events actually happened, we must read their letters.

The war caught not only the Israeli army and government off guard, but also the nation’s press. This included a number of newspapers and magazines intended for children. Two days after the war’s outbreak, on October 8th, Davar Leyeladim (a weekly children’s supplement of the Davar daily) published its Sukkot holiday issue. The only mention of the war was a short item at the top of the first page. It began with the words: “With the closing of this issue, on the eve of Yom Kippur, a fourth war broke out between Israel and its neighbors: the Syrian army crossed the border in the Golan Heights and the Egyptian army crossed the Suez Canal. Fierce battles are being waged on land, at sea and in the air.”

Plainly, there was an attempt to reassure young readers and present Israel as in control of the situation—even before the fog of war had lifted: “The Israeli home front has been called up and everyone has gone out to do their duty. At the time of writing, the IDF, with supreme heroism, is blocking the enemy’s advance and the both the Syrian and Egyptian armies are suffering heavy losses. News from the front lines is still vague, [and here there appears a quote from Defense Minister Moshe Dayan who predicts that “there is no doubt that the war will end in our favor!”].

The October 8th issue of the Haaretz children’s edition managed to update its readers further, but even there the news filled only a single page. In it, readers learned of the “small and insignificant” achievements of the Arab armies, “considering the fact that the enemy struck the opening blow.”

Subsequent issues presented a more complete picture of the war’s events, in greater detail—with emphasis on the soldiers and their stories. Nevertheless, most of the issues maintained their pre-war format and regular sections, including serial fiction, children’s songs and even jokes. The section relevant to our discussion is “Haaretz Shelanu Readers Write” published in Haaretz Shelanu (“Our Country”), a children’s weekly.  There we learn that despite the intention of keeping up a routine even during the country’s most difficult moments, the war clearly consumed the thoughts of the nation’s children.

The first time we hear these children’s voices is the third week of the war, in Haaretz Shelanu’s October 22nd issue. In the letters from readers we hear the paralyzing fear caused by the fighting. Anat Gavrieli from Tel Aviv wrote: “Dear editor, I know there is a war. The Egyptians surprised us and ambushed us. I feel uneasy. There are real sirens, [not just drills]. Instead of going down to the shelter, I stay at home, seized with fear. On radio and television—all the time its war . . .  I am glued to the radio like a snail to its shell. I hope and pray that there will be peace and that the war will end in peace.”

Alongside the striving for peace, we find quite a bit of anger over the surprise attack: “Dear editor, the Arabs are cowards! We are not! Our enemies thought to defeat us during the day of fasting and prayer, but they soon learned that despite the fast we were ready to fight for our very right to fast and pray in peace. Our victory is assured, because our fight is a fight for life,” wrote 10-year-old Liora Binyamin of Haifa.

Fear, longing for peace and anger also appear in later issues, alongside the simple questions and thoughts of the children. When the sirens sounded, Hagit Nakav and her sister went down to a bomb shelter in their apartment building in Haifa. To pass the time the two played, and “suddenly I thought: there in the north they are fighting, and here am I sitting and playing.” In the midst of the chaos of war and anguished concern for brothers and fathers fighting for their lives, Meirav Bieber, 10, from Raanana, sent a question: “In wartime, like now, what happens to the animals at the zoo? Are they put in shelters, or left in cages? And if they are left, what happens if a bomb falls on them? It’s animal cruelty!”

Comparisons between Israel and its enemies in the war focused on the question of sanctity of life. The children writing to the newspaper wrote decisively, as Anat Kasavi from Nahariya put it: “They, the Arabs, do not care at all about their people! If one falls, ten replace him. This is not the case with us! 658 dead after a week of fighting, from our very best! I don’t want our people to die, and I don’t want our enemies to die!”

Many of the young letter writers wrote about life on the home front in the shadow of the war. Ella Tamar from Tel Aviv wrote about the war’s silent, overlooked heroine—the bereaved mother. Twelve-year-old Ella chose to link the figure of the bereaved mother to stories from the Bible, and held the patriarch Abraham’s heroism on a par with the grieving mothers, adding, “When the farmer sows his fields he knows he will soon reap the harvest. Yet these mothers will not reap theirs; they will not see their sons grow up and witness the fruits of their labor. The war prevented that. “

With the announcement of the ceasefire, the country’s children turned once again to expressing their longing for peace. Gadi Marcus from Tel Hashomer wrote, “I think in my heart how awful war is. Apart from the many casualties, there is a lack of a workforce on the home front. Everything must be done for peace.”

With the fighting ended, the young writers were able to think about their enemies’ motivations for going to war. Talia Nur, 12, from Bat Yam, thought the surprise attack by the Egyptians and Syrians stemmed from a sense of loss of confidence after Israel’s decisive victory in the Six-Day War of 1967, and claimed that the “arrogance and dismissiveness” that characterized the Israeli attitude ahead of the Yom Kippur war was “not the right way to estimate the Arabs.” Eleven-year-old Ronit Hagai from Ramat Gan wondered: “Maybe most of the Arabs did not want to fight, and it was only the leaders who incited them?”

Some of the writers responded to other children’s letters, such as seventh grader Galil Ben-Dor from Gvat: “Even though the Arabs were forced to retreat, they were not broken. Do not think, Liora, that we are braver than the Arabs.”

The contributions of the Israeli youths themselves to the war effort were also occasionally mentioned, such as in this letter published in the November 26th issue:

With the war’s end and the rise of public debate on what was immediately dubbed “The Fiasco,” the youth displayed an impressive engagement in current affairs. Was it Dayan’s fault? Should the entire government take responsibility? Should the ruling party receive the blame? The figure of Motti Ashkenazi soon came to the forefront. Ashkenazi was a reserve officer whose personal campaign against the Israeli leadership’s failures surrounding the war became a public protest movement. Who was in the right—Dayan or Ashkenazi? What were the limits of legitimate criticism? These questions riveted the attention of children who were only ten or twelve years old. Even if their words echo those of their parents and other adults around them, their preoccupation with and articulation of the issues appears very mature today. Here are some excerpts:

“Motti Ashkenazi is nothing but a chatty parrot, who shouts and screams as he marches around the Knesset. And it is shameful for the State of Israel that a man who speaks so much nonsense is not stopped!… Ilana Zohar, Beer Sheva”

“It is possible that Moshe Dayan is culpable for what happened, but in fact we are all flesh and blood, every person can make a mistake, but he certainly didn’t do it on purpose. Therefore we must understand him and logically consider his actions in the correct way…Melli Herbst, #30 Uziel Street, Ramat Gan”

“Ruthi, you yourself wrote that Israel is a democracy, and that includes freedom of expression. So why shouldn’t Motti Ashkenazi express himself publicly?…Varda Harif, #22 Tirza Street, Ramat Gan”

“The people elected Moshe Dayan 6 years ago, and now, because of the war’s fiascos, support for Moshe Dayan has waned. Motti Ashkenazi demands that Dayan resign, and rightfully so. Moshe Dayan, as the minister responsible for state security, must bear the consequences…Noam Ben-Ozer, 10 years old, Kibbutz Gan-Shmuel”

This article is based on a previous article by Ioram Melcer.