When Jews from the Land of Israel Vacationed in Lebanon 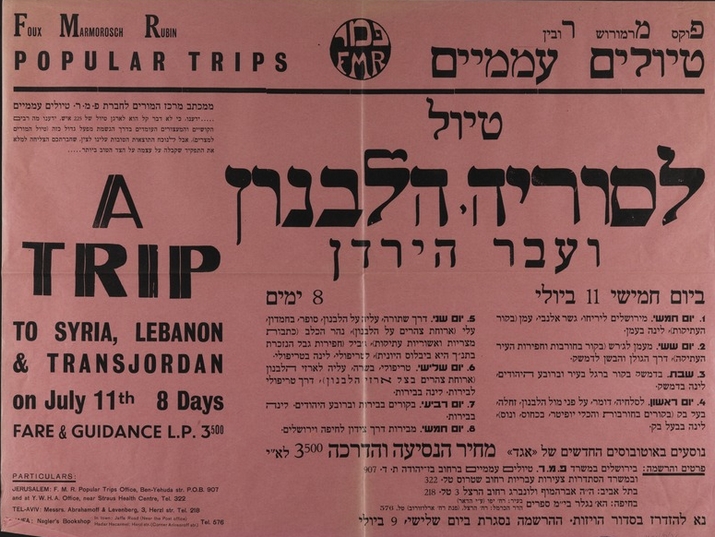 From the Ephemera Collection at the National Library of Israel

As a result of the famous Sykes-Picot agreement, a line was drawn in the Middle East, separating Israel, Transjordan and Iraq, which were given to the British, and Syria and Lebanon, which were given to the French. This border wasn’t as inflexible as the modern boundaries we know today. Though tensions certainly existed, these were mainly felt between the various ethnic and religious groups of the region, Arabs and Jews among them. When it came to relations between the respective governments that ruled Mandatory Palestine and Lebanon (and Syria), ties were in fact quite cordial: merchandise was sent from one place to the other, the railways laid down by the Ottomans connected distant lands, and most importantly – people traveled freely across the region.

As a result, just as Jewish merchants moved between Jerusalem, Damascus, Halab, and Beirut during the days of the Ottoman Empire, citizens of Mandatory Palestine – both Jews and Arabs – continued to visit their northern neighbors while living under British rule. The local tourist industry in particular, flourished during this period. Lebanon was considered a fascinating and attractive destination: its southern shores, the vibrant metropolis of Beirut and the beautiful snow-capped mountains – a rare sight in the Middle East. The Hebrew press and bulletin boards were filled with advertisements appealing to the Jewish readers to come and relax in Lebanon.

Hundreds of enticing illustrations and advertisements were frequently published in the papers. Ads promoting the country’s many hotels emphasized the cool, almost European weather and the cedar trees viewable from one’s window. These tourist establishments were often given French names to increase their prestige in the eyes of the holiday goers. Just like ads common to this day, they emphasized the short distance from the hub of Beirut, and promised lavish accommodations at affordable prices.

What else attracted potential Hebrew tourists? Ski! In the arid Land of Israel, there weren’t many snowy places to engage in this popular European hobby, but in Lebanon, winter sports flourished, even in springtime. Ski instructors were brought in from Europe, and the promise of enjoying snow so close to home attracted many.

So let’s say you decided to spend your summer vacation in Lebanon. How would you get there? You could take the train of course, but why settle for that? Tourists were invited to board one of the ships departing from the port of Haifa and stopping at various ports en route to Beirut, and beyond. You could also choose to travel by bus – these departed from the central bus station in Tel Aviv. The Egged Museum still holds travel tickets to these exotic destinations. And for several hundred Palestine pounds (liras), you could even take a taxi from Haifa.

Of course, you could choose to spend your vacation on an organized trip. The travel company would take care of everything. That way, you could be sure not to miss any significant destination or attraction. Where did these tourists visit? It was unheard of to complete a trip to Lebanon without a tour of the coastal cities, driving up to the Lebanese mountains, and last but not least, visiting the ancient ruins of Baalbek.

Without doubt, Lebanon was considered an attractive, intriguing destination for many. In the 1930s, competition was so fierce, that hotels even enticed Jewish holidaymakers with the promise of kosher food. Hebrew newspapers published advertisements for acquisitions or partnerships in these hotels, and lectures on the geography of Syria and Lebanon were often given by senior lecturers, educators, and geographers of the Hebrew community in Mandatory Palestine.

Apparently, the practice was so widespread, that summer trips to Lebanon were still being promoted during the early days of the 1936–1939 Arab revolt.  However, it seems as though during this period, some of the hotels went bankrupt. A hotel in Metula at the northern tip of the Land of Israel named itself “The Snows of Lebanon” (Sheleg-HaLevanon) and invited the local holiday-goers to its premises, instead of spending money abroad, in such times of hardship.

Adverts about trips to Lebanon were advertised even during World War II, although after the Germans conquered France, enemy soldiers were stationed in Syria and Lebanon. However, after Lebanon gained independence in 1943, travel resumed, although to a lesser extent, due to the escalation of the Jewish-Arab conflict in what was still Mandatory Palestine.

Of course, the War of Independence and the establishment of the State of Israel brought an end to this popular practice. And until we can resume skiing down the slopes of the Chouf Mountains, or sunbathing on Beirut’s beaches, we invite those of you who may recall a family trip to Lebanon, to tell us about it here in the comments, on Facebook, or Twitter.