Else Lasker-Schüler’s Drawing: “The Banished Poet”

Home > Germany the Jews and Israel > Else Lasker-Schüler’s Drawing: “The Banished Poet”
Diaspora

Since 1974, Lasker-Schüler's artistic estate has been preserved at the National Library of Israel 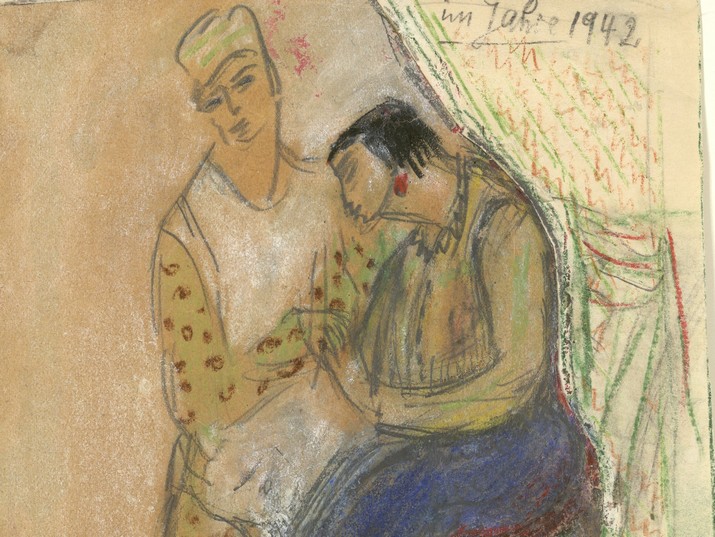 “The Queen of Expressionism”: That is how Else Lasker-Schüler is known to this day. Her place in this artistic stream, which reached its peak some 100 years ago, has remained uncontested and unique, both since she was a woman (almost the only woman among the prominent representatives of this style) and because she was a poet, playwright and painter all in one. The multi-disciplinary nature of Lasker-Schüler’s work characterizes her as an outstanding representative of Expressionism, since the boundaries of her various genres of expression (writing, theater and drawing) within this stream were quite blurred. Among her outstanding works were love poems, some of which were translated into Hebrew by Yehudah Amichai, Natan Zach and others.

Else Lasker-Schüler was born in 1869 in the city of Elberfeld, Germany, today a neighborhood of the city of Wuppertal, to a family of Jewish bankers. She was trained in painting in Berlin, and from the early 20th century, began publishing poems, and later, also plays, only a few of which were staged during her lifetime. Despite this, Else Lasker-Schüler is considered to this day one of the most important poets in the history of German literature in the 20th century. In 1932, she was even awarded the most prestigious literary prize in Germany at the time, the Kleist Prize.

With the rise of the Nazis to power in 1933, the poet was forced to leave Germany. Until 1939, she lived in Switzerland, but she visited Eretz Israel in 1934 and 1936. During her third visit, the outbreak of World War II caught her by surprise, and at the same time, the Swiss authorities forbade her return to Switzerland. In Eretz Israel, Lasker-Schüler settled in Jerusalem, where she continued writing in German. One of the last works she wrote is a play entitled, “I and I” (Ichundich), in which she describes the fall of the Nazi regime. And yet, her death in January 1945 prevented her from carrying on with her work and witnessing the turning point in European history.

Among the artist’s drawings is a chalk drawing mounted on a piece of cardboard (142X225 mm), entitled “Die verscheuchte Dichterin” (“The Banished Poet”).

The picture – combining poetry and drawing – might be seen as a synopsis of Else Lasker-Schüler’s fate: On the drawing’s cardboard base, the poet wrote out an excerpt of a poem she had published in her first poetry collection of 1902: “If I knew of a stream as deep as my life, I would flow with its waters.”

In addition, Lasker-Schüler made a sketch entitled “Drawing in 1935 in the Hospital following Injuries due to the Nazis.” And yet, on the drawing itself, she wrote “in 1942” and by way of summary, also “1935-1942.” At the center of the drawing one can make out two human forms; a woman is sitting, her gaze case downwards, arms linked with another figure that is standing next to her. The woman in the drawing is apparently Lasker-Schüler herself, and indeed, the contours of the woman’s profile recall her other self-portraits. The second figure, apparently a man in Oriental dress including a head covering, is soothing the woman, whose body language powerfully suggests weariness and mourning.

Art experts believe that the drawing was created at least partially in the mid-1930s, but it is likely that Lasker-Schüler added details and the caption only later, apparently some time before 1942. In this work, the artist demonstrates all of her drawing ability: the composition conveys Lasker-Schüler’s desperate mood using simple lines and a refined technique. The five chalk colors and the basic tone of the paper were sufficient for the artist to draw one of her last works, characterized by a richness of artistic expression.