A Sufi Journey to Jerusalem 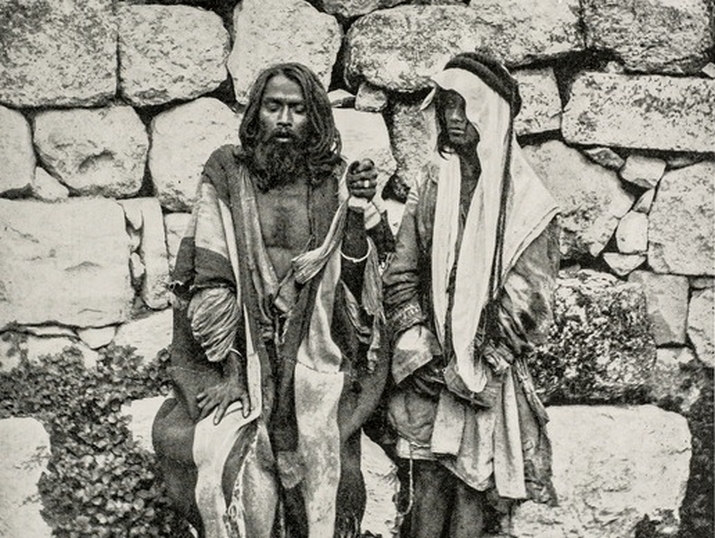 Two ecstatic Muslim holy men in Jerusalem, photographed by the Christian missionary Robert E. M. Bain in 1894. From the Lenkin Family Collection of Photography at the University of Pennsylvania Libraries; available via the National Library of Israel Digital Collection

Late one night in the spring of 1690, the Sufi saint and scholar Abd al-Ghani al-Nabulsi (1641-1731) had a dream. In his mind’s eye, al-Nabulsi saw himself leaving his house and making his way to one of the markets in Damascus, his home city. As he later recounted, (in Elizabeth Sirriyeh’s translation), he found there

one of the finest Arab horses offered to us to ride and we rode it and went on our way. Suddenly we encountered two strong and energetic young men; they were well-dressed, magnificently clothed in green and red. Each of them put the palm of his hand under my foot while I was riding and their palms took the place of stirrups, each on one side, and I rode the horse like that with the two young men.

The author of a notable–and still popular–book on dream interpretation, al-Nabulsi was an expert on deciphering the symbolic content of our nighttime visions. But not even he could see the dream was in fact a premonition. A few days later, al-Nabulsi set out on his famous journey to Jerusalem, which served as the basis for one of the most important accounts of seventeenth century Palestine. At the head of the caravan, as prefigured in the dream, marched two young majadhib, Sufi ecstatic holy men, who seemed “like angels.”

Al-Nabulsi was one of the leading Muslim intellectuals of his age, a wide-ranging figure whose over 250 works include treatises on Islamic law, the benefits of smoking, agriculture, poetry, commentaries on the classics of Sufi mystical literature, and more. Dozens of manuscripts of works by al-Nabulsi are included in the collection of the National Library of Israel. While a copy of al-Nabulsi’s Jerusalem travelogue is not among them, the collection does include an early 1902 printed edition of the work, acquired by the scholar and collector Abraham Shalom Yahuda.

The scion of a wealthy family of judges and religious authorities that traced its own origins back to Jerusalem, al-Nabulsi garnered an early scholarly reputation and was teaching already at the age of twenty. As his engagement with Sufism (especially the work of Ibn Arabi, whom he considered his spiritual father) deepened, al-Nabulsi increasingly withdrew from public life. During one seven-year period, he is said to have remained confined in his house, letting his hair and nails grow long, and achieving a spiritual transcendence which he attributed to the overwhelming experience of God’s presence.

Al-Nabulsi’s six-week-long journey to Palestine, which included seventeen days in Jerusalem, was only one of four long excursions that followed this period of seclusion. Aside from that journey, al-Nabulsi traveled through today’s Syria and Lebanon, completed the annual hajj pilgrimage to Mecca (on which occasion he returned to Jerusalem for a second stay) and visited Egypt as well. Each of these trips became the subject of a travelogue.

In composing these travelogues, a genre known as rihla in Arabic, al-Nabulsi was following a well-worn tradition, the most famous example of which is Ibn Battuta’s (1304-1368) account of his thirty-year-long wanderings that took him from Morocco to China. However, al-Nabulsi’s travel writing is distinguished by his focus on Sufi themes and characters; it is no accident that the journey begins with an encounter with the two ecstatics. This is clear even from the title of al-Nabulsi’s Jerusalem travelogue: Al-hadra al-unsiyya fi al-rihla al-qudsiya (“The Intimate Presence on the Jerusalem Journey”). The “Intimate Presence” refers both to the name for the Sufi spiritual gathering, often held on Thursday nights, and to God’s own presence, which al-Nabulsi hoped to experience on the journey.

Al-Nabulsi crossed into the country via the Golan Heights, passing the snow-capped Mount Hermon. He complained of the cold and the lawlessness of the country, reporting murders, the looting of a mosque, and even a plot to kidnap him near Jenin, which, he said, was foiled by divine intervention.

Arriving in Jerusalem, al-Nabulsi and his party were met by a delegation of dignitaries, including members of a local Sufi order, who, along with a growing crowd, accompanied the group as they entered the Damascus Gate and made their way to the Haram al-Sharif (Temple Mount). On entering the sacred precinct, al-Nabulsi recited an appropriate verse (here in Samer Akkach’s translation) on the Prophet Muhammad’s night journey from Mecca to Jerusalem, from where he ascended to heaven:

As the full moon journeys in the thick of darkness.

The travelogue, written in rhymed prose and interspersed with similar verses, includes descriptions about Jerusalem’s Muslim landmarks, including the Mamila cemetery and the Mount of Olives, as well as the city’s Christian sites. Al-Nabulsi and his party also made a side trip to Hebron to see the Tomb of the Patriarchs, venerated as the burial site of Abraham, Isaac, and Jacob. Curiously, in his account of seeing the Dome of the Rock, which follows a long section recounting the powers and virtues of the site, al-Nabulsi erroneously states that the building was constructed by the Crusaders, rather than, as was also well known at the time, the Umayyad Caliph Abd al-Malik (644-705).

While the travelogue provides fascinating details about Jerusalem and his visit there, al-Nabulsi’s primary concern lies elsewhere: seeking out and describing spiritual experiences, particularly his encounters with holy men and sacred shrines and tombs. In terms of the latter, for instance, al-Nabulsi records stopping to pray at the tomb of Samuel, located just north of Jerusalem, before entering the city. As for living holy men, these included both the members of established Sufi orders, and, even more so, the majadhib, ecstatic mystics who lived on the margins of society and its norms. Al-Nabulsi describes some of these majadhib as wandering unclothed and others as wearing only rags, endowed with special powers to read others’ minds and see the future.

Al-Nabulsi met large numbers of such holy men in both the city and the countryside. He describes a party of majadhib from Jenin who meet him as he arrives in the city, having learned of his coming by divine inspiration, and another ecstatic near Nablus who would march armed through the market. Near the village of Yabad, just outside Jenin, al-Nabulsi encounters an ascetic named Sheikh Za’id. A former slave, he was overcome one day by a sudden divine illumination and moved to a cave where he sat, naked, grinding coffee beans and dispensing coffee, blessings, and advice to those who came to consult him. Za’id, al-Nabulsi relates, was both fantastically strong and could see the future, and predicted a happy ending for the author’s journey.

What’s fascinating about al-Nabulsi’s description of a country teeming with miracle-working saints, venerable tombs, and ecstatic holy men–and his other travelogues paint a similar picture–is the fact that it has almost entirely vanished. While such figures continued to be part of the rural and urban landscape for generations, by the first decades of the twentieth century there were few of them left. They had been obliterated by the combined forces of modernization, and colonialism, as well as competing Wahabi and Salafi ideologies, which denounced Sufism as un-Islamic. One of the pleasures of reading al-Nabulsi is the glimpse he provides us into this strange and lost world.