The Search for Sella Podbielski’s Books

How the National Library of Israel contributes to book provenance research. 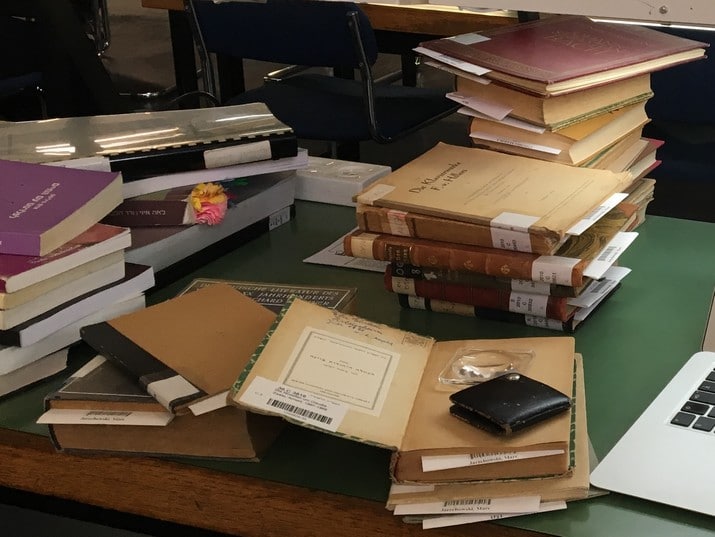 I came to the National Library in December, 2017 in search of Sella’s books. Sella Podbielski née Weiss was born in Gostyn in Poland in 1888 and was most likely murdered in Auschwitz. Her books – if they still exist – would be the only surviving items from her possessions.

One of her two sons, the writer Gerhard René Podbielski, left Poland in January 1939 and I have been working for his son since 2015, exploring the family’s tabooed fate.

Sella’s books first came to my attention during an online search in a tangle of digitized microfilms from the National Archives and Records Administration (NARA) in Washington. They were recorded in the Offenbach Archival Depot (OAD), established in early 1946 by the Monuments, Fine Arts and Archives section of the American military government to collect books, manuscripts and archival materials that had been looted, confiscated or taken by the German army under the Nazi government.

In 1947, the organization, Jewish Cultural Reconstruction Inc. (JCR), was founded to deal with the restitution procedure of Jewish property and heirlooms following the Holocaust. Its executive secretary from 1949 to 1952 was the political theorist Hannah Arendt. When the Offenbach Depot was cleared in June 1949, the remaining items from the more than three million volumes which had been handled there, most of which had already been restituted, were transferred to the Central Collecting Point (CCP) Wiesbaden. In Oct 1949 a list of books received from Offenbach was compiled, containing about 45000 books previously owned by private Jewish owners identifiable by signatures, stamps or ex-libris. According to this list, three of the books contained Sella’s signature.

I realized that I was searching for a needle in a haystack as the lists from Offenbach and Wiesbaden named the previous owners of the books but listed no book titles. But it was too early for me to give up. I found out in the NARA microfilms that about 12,000 books from this list were packed in cases and mostly sent to New York and Jerusalem in 1950. I realized that JCR provenances have not been recorded in the library catalogs, even more so the names of the previous owners. My correspondences with library staff showed that not much institutional knowledge of the processes of book distributions in the 1950s has remained.

I was fortunate that Daniel Lipson of Israel National Library was also interested in the books from the JCR and in their stories. He put much effort into responding to my request and he created an excel list with thousands of books, which the National Library had received from the JCR in the 1950s.

It is a reconstruction and – as Lipson puts it – definitely not complete and far from being accurate. But it was something to work with and I decided to work by taking random samples. I chose 40 books written by authors read and appreciated by Sella’s son – this was the only possible lead I had – and requested them into the reading room for an autopsy.

Some of them still had the JCR label from Wiesbaden, but in other cases it has fallen off or has been lost during re-binding.

I found stamps, from institutions like the Jewish communities of Dresden and Frankfurt upon Main or the Königsberg Zionist Association, but also of Nazi institutions which had formed libraries mainly from looted books. I also found signatures, and some of such private owner marks can be directly connected to the 1949 list.

Just to give one example: The library’s third copy of Arnold Zweig’s Novellen um Claudia contains the following handwritten entry: Else Ehrlich, Hildesheim, Juli 1921 v. L. Meyerhof (Else Ehrlich, a resident of the city of Hildesheim, has received this book from L. Meyerhof in July 1921).

The Wiesbaden source does not contain the name Else Ehrlich, but lists one book from the possession of a Hildesheim Ehrlich. Evidently the person in charge could not decipher Else or simply forgot to include the given name in the list and put Hildesheim into the column for the given name instead of the place column.

As much research is being done on the victims of the Nazi terror, it took me only five minutes and a few clicks to find out about the deportation of Else Ehrlich from Hildesheim in April 1942 into Warsaw Ghetto. Her date and place of death are unknown, but this one book – and maybe more – has survived and we can hold it physically in our hands.

Book provenance research is – in the shadow of art provenance research – still quite a young discipline, but many public libraries in Germany have started to check their stocks for looted items and to document their previous owners, for example in the cooperative looted cultural assets database, with six – so far – participating institutions such as the Free University Berlin Library.

I did not find Sella’s books. But I found books from the possession of people who shared her fate. And with the help of Daniel Lipson I found a way to regain knowledge which had been lost over the decades in the shut library stacks. Ten matches out of the 40 books I have checked and compared with the 1949 list is a promising quota, but it is only just the start.