An Arab Qur’an with a Persian Identity

The Persian language as we know it today emerged after the Arab conquests of the 8th century CE. One of the National Library of Israel’s treasured manuscripts contains the first known example of New Persian to appear on the world stage... 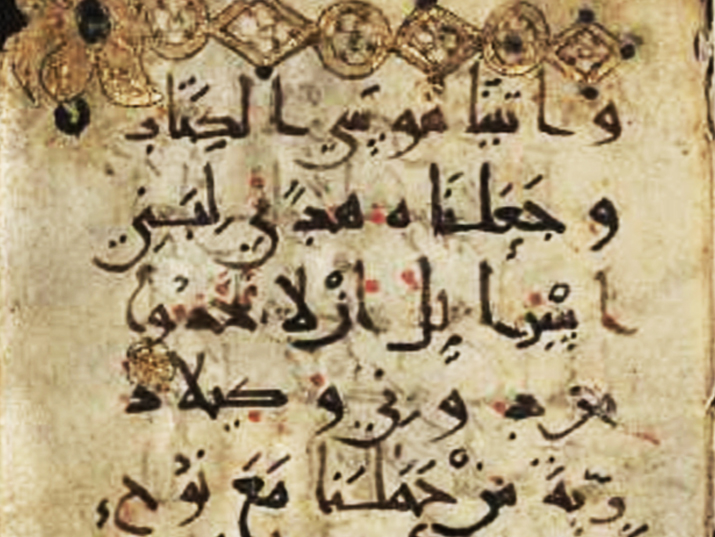 Not much is known about Ahmad Hikani. He lived in the 9th century CE, probably in the Khorasan region of eastern Iran, the birthplace of many Islamic scholars during the religion’s early period. What is certain is that his knowledge of Arabic was extensive enough that he was able to properly vowelize a text in that language—and not just any text, but the Qur’an itself.

Yet, despite our lack of information about him, Ahmad Hikani is a key figure in Iranian history: his name is tied to a revolution in the Persian language that occurred in the Middle Ages.

Our story begins with a manuscript of the Qur’an purchased by the famous collector Abraham Shalom Yehuda. This manuscript, which includes only part of the Qur’an, from Surah An-Nahl (The Palms, No. 17) to Surah Al-Khaf (The Cave, No. 18), was copied on parchment, with gold ornamental decoration signaling the beginning of each chapter, and dots marking the vocalization of each word. These markings, in addition to the square Arabic script, known as “Kufic script,” hint at this Qur’an’s antiquity.

How ancient, you may ask? A handwritten comment, called a colophon, placed at the end of the Qur’an by the scribe who emended the vocalization in the manuscript, reveals that this Qur’an was copied in the year 905. What is special about this comment is that it is written in Persian in Arabic letters. This is, in fact, the first known appearance of the language known as New Persian, written in Arabic letters, on the historical stage.

“Ahmad Hikani, may God in his grace preserve us in the bosom of the faith, emended this portion of the 30 portions [of the Qur’an] by adding marks [diacritics], vowel signs and the shaddah sign [= a doubling of a consonant], in  the year 292 [AH, 905 CE].”

The uniqueness of New Persian, also known as Modern Persian, is on the one hand the preservation of characteristics of the “Middle” Persian language, the one that preceded the Islamic conquests, and on the other the conversion of the ancient Persian script into Arabic letters and the entry of new vocabulary into the Persian language. This move is indicative of an independent Persian identity, distinct from that of the Arabs who came to Iran with the conquests of the Muslim armies in the early years of Islam.

When Islam spread beyond the Arabian Peninsula in the first centuries after its emergence, it encountered the Persian and Greek cultures, the two pillars of the ancient world. Greek culture was by this point in its Byzantine incarnation, and was common in the eastern Mediterranean basin. Its language was Greek and Christianity was the dominant religion. Persian culture, on the other hand, was common in Central Asia, the language spoken was Persian, and Zoroastrianism was the dominant religion.

While the Greek language, once dominant in the Mediterranean basin, gradually disappeared as Arab-Muslim rule took root in the region, the inhabitants of the former Persian Empire, now under Arab-Muslim rule, tended in a different direction. Instead of adopting Arabic as their dominant language, they adopted Arabic script into the Persian language and created a new language: New Persian.

The change was not immediate: between the seventh and tenth centuries Middle Persian gradually disappeared, reappearing in the tenth century in its new form, New Persian. The changes that the language underwent, that is – what elements were abandoned, what elements were adopted from Arabic and what was preserved from Middle Persian, can be seen in the Judeo-Persian writings from the period. Judeo-Persian, or New Persian written in Hebrew letters, is important for the study of the development of the New Persian language, because some of the texts in early Judeo-Persian have preserved some of Middle Persian’s linguistic features.

The distinction between Persian and Arabic identities does not mean rejection of Islam or of the importance of the Arabic language. In the Middle Ages, Persian scholars traveled to centers of knowledge in the Arabic-speaking world in order to study and teach. They even wrote in Arabic on many and varied topics, from the study of Islamic law to history and geography.

The Qur’an we presented at the beginning of the article is an example of the combination of Persian identity and acceptance of Arabic as an important language. The Qur’an was copied in Arabic because that is the language of the Qur’an. The colophon, as a personal expression of the copyist, Ahmad Hikani, expresses his own Persian identity.

Over the years, Persian identity, which took shape alongside, in the shadow of and sometimes even in opposition to Arabic identity, has become more pronounced and emphasized. Today, this distinct identity is also expressed in national and religious aspects that set it apart from the identities of the Arab world.

Thanks to Dr. Ofir Haim for translating the colophon