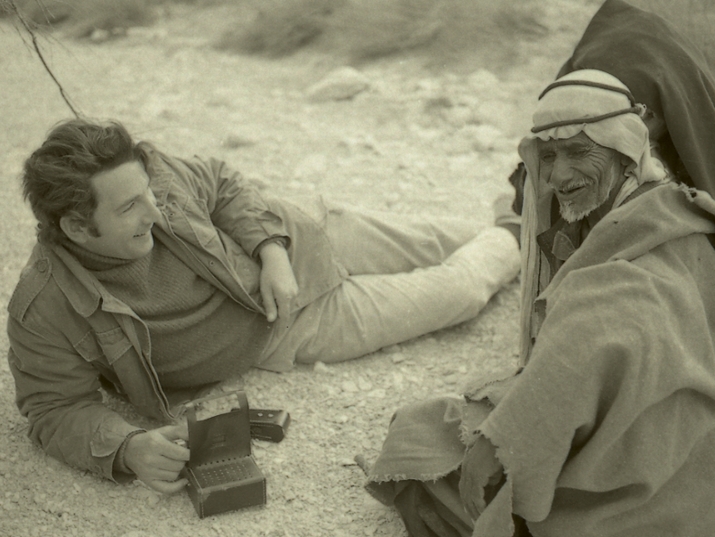 Over the course of more than five decades, Dr. Clinton Bailey has conducted research throughout the deserts of Sinai and the Negev, establishing himself as a world-renowned expert on the Bedouin, Arabic-speaking nomads whose ancient culture survived largely unchanged for thousands of years.

The Clinton Bailey Archive of Bedouin Culture is now coming to the National Library of Israel. The archive includes one-of-a-kind treasures, including approximately 350 hours of interviews and recordings from Dr. Bailey’s research, as well as hundreds of images, slides and video clips documenting Bedouin tribal culture over the past half century.

Dr. Bailey collected these materials immediately before his elderly Bedouin interlocutors passed away, taking their knowledge and memories with them. The archive therefore presents invaluable authentic primary-source materials from the last generation of elderly Bedouin who grew to maturity in the pre-modern period of Bedouin culture.

These materials will not be found in the future. They are a treasure of orally transmitted ancient culture now irreplaceable, and not available via the younger generations of Bedouin who grew up exposed to modernity.

According to Dr. Raquel Ukeles, Head of Collections at the National Library of Israel, “The irreplaceable materials in the archive will serve members of the Bedouin community interested in learning about their past, as well as scholars in Israel and abroad for generations to come. Safeguarding and opening access to these materials is central to the mission and mandate of the National Library of Israel, as we work diligently to preserve the treasures of all of Israel’s communities and share them with diverse audiences locally and internationally.”

The archive presents a remarkable asset reflecting the singular mission of the National Library, an open and inclusive institution dedicated to preserving diverse expressions of cultural heritage and encouraging engagement with them by audiences in Israel and around the world.

The materials will be made freely accessible online through a comprehensive process that will include:

Preserving and opening access to the Clinton Bailey Archive of Bedouin Culture is made possible thanks to the generous support of the Charles H. Revson Foundation, Marcie Polier Swartz/Grantors Foundation and other donors.

Dr. Clinton Bailey has studied Bedouin culture firsthand for more than fifty years. Originally from the United States, Dr. Bailey holds a BA in Middle Eastern and Islamic History from the Hebrew University of Jerusalem, and a PhD in Political Science with a focus on the Middle East from Columbia University. In 1994, he was awarded the Emil Grunzweig Human Rights Award for his life’s work in studying and preserving the history of the Bedouin in Israel and promoting their civil rights. He has received numerous research grants from the National Endowment for the Humanities and private foundations throughout the world.

About the National Library of Israel

Founded in Jerusalem in 1892, the National Library of Israel (NLI) serves as the dynamic institution of national memory of the Jewish people worldwide and Israelis of all backgrounds and faiths. While continuing to serve as Israel’s pre-eminent research library, NLI has recently embarked upon an ambitious journey of renewal to open access to its treasures and encourage diverse audiences in Israel and around the globe to engage with them in new and meaningful ways. This is taking place through a range of innovative educational, cultural, and digital initiatives, as well as through a new landmark complex designed by Herzog and de Meuron. The new home of the NLI, currently under construction adjacent to the Knesset (Israeli Parliament) in Jerusalem, is on schedule to open its doors in 2022.

The Library’s treasures include the largest collection of written Judaica ever assembled, significant handwritten works by luminaries such as Maimonides and Sir Isaac Newton, exquisite Islamic manuscripts dating back to the ninth century, and archival collections of leading cultural and intellectual figures including Martin Buber, Franz Kafka, Natan Sharansky and Naomi Shemer. The National Library holds the largest collection of Jewish and Israeli music, as well as world-class collections of manuscripts, ancient maps, rare books, photographs, communal and personal archival materials, and more.