The content of the book is well known for its blatant aggression against political enemies, democracy, and mainly, against what Hitler viewed as the "enemy race" of the German people: the Jews 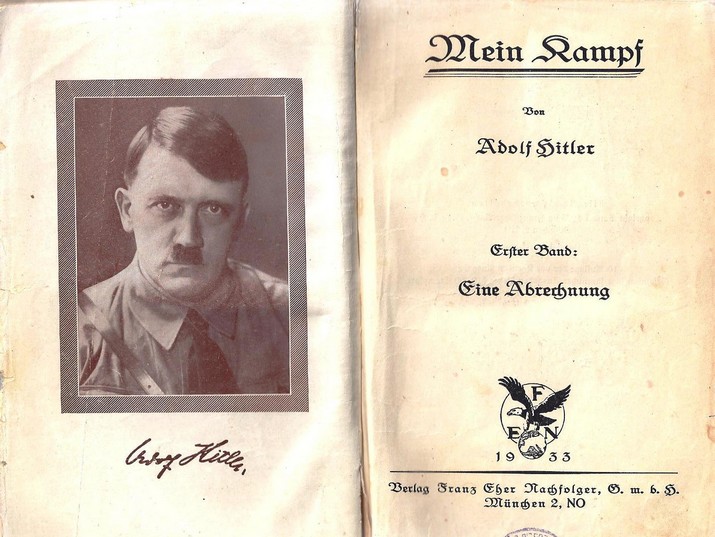 In 1925, shortly after the end of the period of hyperinflation in Germany, a radical political book was published, written by an activist from the right-wing fringe of the political spectrum of those days. The author, who was not particularly well known outside of Bavaria, served a nine-month prison sentence during 1924 following a failed attempt at overthrow the government that he carried out together with accomplices on November 9, 1923, in Munich, the Bavarian capital. During his period of incarceration, the prisoner wrote what was to be his first book, entitled Mein Kampf, or “My Struggle.” The author’s name was Adolf Hitler. No one thought that within ten years, the author of this aggressive book would be heading the German government. No one could have guessed that six years after that, the same man would launch the deadliest war in human history. Who could have known that within 20 years of the book’s publication, its author would commit suicide after losing a war in which over 50 million people had been killed.

The content of the book, originally written in two parts, is well known for its blatant aggression against political enemies, democracy, and mainly, against what Hitler viewed as the “enemy race” of the German people: the Jews. In Mein Kampf, Hitler combined two main elements: autobiographical excerpts, some of them fictional, and in parallel, detailed political plans.

Hitler sought to offer in his book a political outline oriented against “Bolshevist-Jewish” Communism, which in his opinion was a great danger at the time, and on the other hand, against international financial capital, which, he claimed, was also “in Jewish hands.” The author presented a number of political demands in his book, such as the annexation of Austria to Germany, occupation of more “living space” (Lebensraum) for the German people at the expense of other countries, and, as stated, “exposing” the plans of the Jews to take control of the world. Hitler did not hesitate to rely on The Protocols of the Elders of Zion – a false composition written by antisemites in order to “prove” the supposed Jewish aspirations to take over the world.

Many versions, stories, legends and defamations were disseminated around the planning and writing of the book. Hitler was accused of having plagiarized substantial portions of it; it was said that he dictated the text to his close associate, Rudolf Heß; many claimed that Hitler was not capable of editing a coherent text and therefore, was dependent on the help of others in the process of preparing the materials for press. Without a doubt, the book is clearly not a high-quality literary work: the reading is indeed difficult and the reader is quickly put off by the awkward style and the shocking content. These characteristics led to the popular opinion that the book, though widely disseminated (by the Nazi rise to power in January, 1933, over 240,000 copies had been sold), was not widely read. And yet, modern studies have shown that apparently, this extremist political manifesto found an audience that showed a keen interest in its content and ideas. Despite a certain amount of success, however, the initial public impact of Mein Kampf was quite limited. The book was not taken seriously by critics during the era of the Weimar Republic, with the exception of a handful who identified with the Fascist movement in Germany.

Beyond the motivation that pushed Hitler to write a political book, there was an additional reason for the publication of Mein Kampf: Hitler’s need for money. His hope was to earn enough funds to finance the lawyers he hired prior to his appointment as Chancellor of Germany. Before that, the book enjoyed a degree of popularity, but the peak of its success began in January, 1933, with Hitler’s appointment to the role. There is nothing surprising about this: beginning with the Nazi rise to power, the book effectively became the basic plan for the “New Germany.” From that moment, further editions were printed, and copies were distributed to newly married couples (instead of Christian Bibles) and as gifts to colleagues at work. According to estimates by historians, by the end of the Nazi period, over 11 million copies had been sold – and this figure represents the German version alone. These high numbers yielded respectable royalties and Hitler, in order to maximize his income, prohibited the sale of used copies, such that officially, one could only purchase new copies of the book.

Outstanding among the negative responses to the incitement in Mein Kampf is the book by an Austrian Catholic author named Irene Harand. Her 1935 book, called Sein Kampf (“His Struggle”), expresses support for the Jews and tries to protect them from the preposterous antisemitic allegations that Hitler spread through his ideological composition. Harand exposed fabrication as Hitler’s main tool and basis for his claims, and she provides examples of how the lies regarding the Talmud, blood libels, and the claim regarding Jewish “tendencies” to deal in loans and interest, were simply untrue. Harand even undermines the “authority” of the infamous composition The Protocols of the Elders of Zion that Hitler held in such high esteem as a historical document. Luckily for Irene Harand, at the time of the Anschluss she was in England, and was thus spared arrest by the Nazis. Ultimately she immigrated to the United States.

Mein Kampf’s succesful run came to an end in Germany with the country’s defeat in WWII. After the collapse of the Nazi regime, millions of panicked citizens feared that possession of the book at home would be considered criminal, and many copies were destroyed. To this day, it is illegal to print Mein Kampf in Germany, although of late attempts have been made to publish a critical edition accompanied by studies that present the book in its political-historical context. And yet, there is no way to avoid publication of translations of the book into other languages, and quite unfortunately, many editions can be found – most without any accompanying commentary or critique – in many book stores around the world.