Maya the Bee in the Service of Germany’s Soldiers

The beloved children’s book about the brave little bee who saves her beehive became one of the most popular books among German soldiers during the First World War. What led them to carry this book about the adventures of a small bee with them onto the battlefield? Does it contain hints of the devious ideology that would cause global devastation only a few decades later? 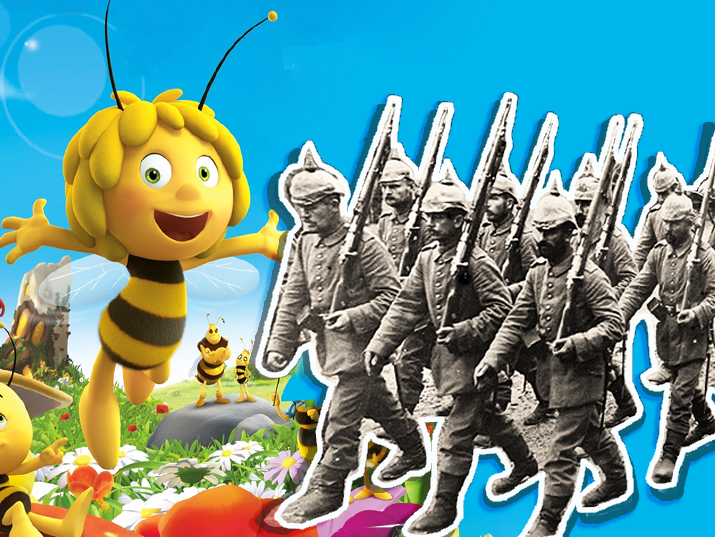 Maya the Bee and German Soldiers in WWI

Maya the Bee is all grown up, and this year (2022) she celebrates 110 years of delighting the world’s children with her adventures in a multitude of languages ​​and media. It was therefore all the more disappointing to discover that the creator of this beloved character was openly antisemitic and promoted some questionable values. However, if you are one of Maya’s fans, don’t worry. We aren’t going to spoil the image of this adorable fictional and animated character. Along the way, we’ll meet Henrietta Szold’s younger sister Adele, who will remind us that books can be read in many ways.

First published in Germany in 1912, The Adventures of Maya the Bee tells the story of a little bee who leaves her hive in the midst of a rebellion, encounters the outside world with its friendly and dangerous creatures, and eventually returns to her hive to save it. The book was written by Waldemar Bonsels (1880–1952) for his sons, and became a great success when it was published.

The fact that it was popular not just among German children, but also among Germany’s soldiers in the First World War suggests that there is more to this book than meets the eye. What was it about this story and the adventures of a little bee that brought young men on the battlefield to eagerly read a book that was clearly intended for children?

The reason is that among the flowers, insects and adventures, hide militaristic and nationalist messages and values which can be interpreted as a parable of the German people and its army.

One of the clear messages conveyed in the book is that one must fight—and if necessary be prepared to die—for the homeland. Already at the beginning of the book, the nanny Cassandra says to the newly born young bee: “So do not sting . . . except in dire need, and then do it without flinching or fear of death” (unless otherwise noted, all quotations are from The Adventures of Maya the Bee [New York: Thomas Seltzer, 1922]). Maya internalizes this lesson and when she finds herself captured (for the second time in the book!) she thinks, “I am doomed anyhow. So since death is certain one way or another, I may as well be proud and brave and do everything I can to try to save them . . . If my people are to be vanquished and killed, I want to be killed, too. But first I must do everything in my power to save them.” This message reaches its climax in the battle that takes place between the bees and the wasps, where we find this exchange: “’I should like to die for you,’ Maya stammered, quivering. ‘Don’t worry about us,’ replied the queen. ‘Among the thousands inhabiting this city there is not one who would hesitate a moment to sacrifice his life for me and for the welfare of the country. You can go to sleep peacefully.'”

Here too death in battle is presented as sad but also heroic. The brave commander bee perishes in battle, and the readers learn how “His brave death inspired them all with the wild rapture that comes from utter willingness to die for a noble cause.” Reading these passages makes the book’s presence on the brutal battlefields of the First World War a little more understandable.

The book also emphasizes the duty of loyalty to the homeland. Maya’s leaving the hive is a reprehensible act, and only the fact that she returned to save it means that she is forgiven for “the crime of  leaving her homeland” (from the Hebrew translation by Aryeh Leib Smiatitzky, Devora Zivit, Omanut Publishers, 1928). Even during her journey, the readers understand that it is better to shelter in the shadow of the rulers and serve them, rather than set out on an independent path. “Oh, thought Maya, how happy it made you to be able to count yourself one in a community like that, to feel that everybody respected you, and you had the powerful protection of the state. Here, out in the world, lonely and exposed, she ran great risks of her life. She was cold, too.” Even the wasps admit that “we are a more powerful race, but the bees are a unified nation, and unflinchingly loyal to their people and their state.”

As can be understood from the last sentence, nationalism is not limited to loyalty to the homeland but also includes expressions of national and racial superiority. Emphasized throughout the book is the bees’ superiority over all other insects. “For it is to our courage as well as our wisdom that we bees owe the universal respect and esteem in which we are held,” explains Cassandra to the young bee Maya. In her meeting with the beetle, the narrator points out that “The bees had more culture and better manners,” than the other insects, and the fly, which is afraid of being stung, declares “Everybody knows that you bees are the most respected of all insects.”

This feeling of superiority is connected to the fact that Bonsels, a humanist and lover of nature, was also an avowed antisemite. He openly expressed his support for the Nazis with their rise in 1933 by publishing a hateful article about the Jews. According to the article, the Jewish people are a deadly enemy that poisons German culture and must be stopped. The book about Maya the Bee was written years before, but some believe that an inkling of this thinking can also be found among its pages. On one of the first pages of the book, the governess Cassandra tells Maya: “The hornets are our most formidable enemy, and the wickedest, and the wasps are a useless tribe of thieves, without home or religion. We are a stronger, more powerful nation, while they steal and murder wherever they can.” It is not unreasonable to assume that the evil wasps in the book symbolize the Jewish people. Bonsels was even approached to turn Maya the Bee into an animated film in the service of Nazi propaganda. The request came from a German studio established in 1941, with the aim of presenting an alternative to Walt Disney’s American studios and spreading German ideology through animated films. Bonsels accepted the offer and only a financial dispute led to the deal’s falling apart. After the war, Bonsels’ ties with the Nazi Party led to the boycott of his books for a short period.

In the United States, the book was first published in 1922. The English translator was none other than Adele Szold-Seltzer, the younger sister of Henrietta Szold, leader and founder of Hadassah, the Women’s Zionist Organization of America. At the time, Bonsels’ views were not yet widely known and the story was seen as a naïve children’s book. Reading it today, we cannot ignore what we now know about the writer’s personal views or the various militaristic messages embedded throughout. Nevertheless, it also shows appreciation for nature’s beauty, as well as the values of curiosity, compassion, and coming to the aid of one’s fellow creatures. Maya befriends many insects she meets along the way, marvels at the beauty of the butterfly, the dragonfly and the night gnome, the song of the red-breasted robin, the melody of the cricket. The various insects share information with her and come to each other’s rescue—Maya helps the dung beetle regain its footing, and later he will be the one to save her from almost certain death in the spider’s web. And we haven’t yet mentioned love. In one episode, upon seeing a loving young couple and thinking it the most glorious sight, Maya says to herself “human beings are most beautiful when they are in love.”

But let’s be honest, most of us first fell in love with Maya the Bee at the movies or on television and not in the pages of a book. The first film adaptation was a silent film starring real animals, released in 1926 during Bonsels’ lifetime and with his collaboration. Yet Maya’s great success came only in 1975, over twenty years after Bonsels’ death, and from Japan, of all places. It was the Japanese animated 104-episode series that brought Maya into homes all over the world and turned her into a famous and beloved children’s character and star of an array of merchandise from chocolates and puddings to dolls and bedding. The series also brought us Willy and Flip, two beloved characters who don’t appear in Bonsels’ book and were only added in the animated series. Willy became so popular that he appeared in almost every adaptation of the story (for example, in the French animated series from 2012), even though, as mentioned, he doesn’t appear at all in the original book.

The first Hebrew translation of the original book was by Aryeh Leib Smiatitzky in 1928, titled Hadvorah Zivit. A new translation by Bezalel Wechsler appeared in 1977 under the title Hadvora Maya VeHarpatka’oteha.  Added to these were shorter books based on the television series, which were already far removed in spirit from the original.

The makeover was finally completed in 2014, with another motion picture based on the book (Maya the Bee Movie), featuring even fewer ties to the original narrative. The film received poor reviews but was quite successful at the box office and also spawned two sequels. It even managed to completely overturn Bonsels’ doctrine from beginning to end. Not only does it erase all traces of any antisemitic undercurrent and offer a practically pacifist message, but it also reverses Bonsels’ most basic message for young, especially female readers – to obey and conform. Instead, the film teaches its young viewers to see Maya’s free spirit and independence in a sympathetic and positive light, and in the spirit of the times educates them to listen to their hearts and to be themselves. Bonsels, who died in 1952, but whose name appears in the credits as one of the writers, would not have approved.