“Vienna of the Sewers”: A School for Dictators

Home > Germany > “Vienna of the Sewers”: A School for Dictators
Diaspora

In 1907 a young man from a small provincial town in Austria arrived in Vienna, the European art capitol of the era, with hopes of enrolling in the art academy. His rejection led him to roam the streets of “the other Vienna,” which many historians viewed to be a “school for the future dictator.” 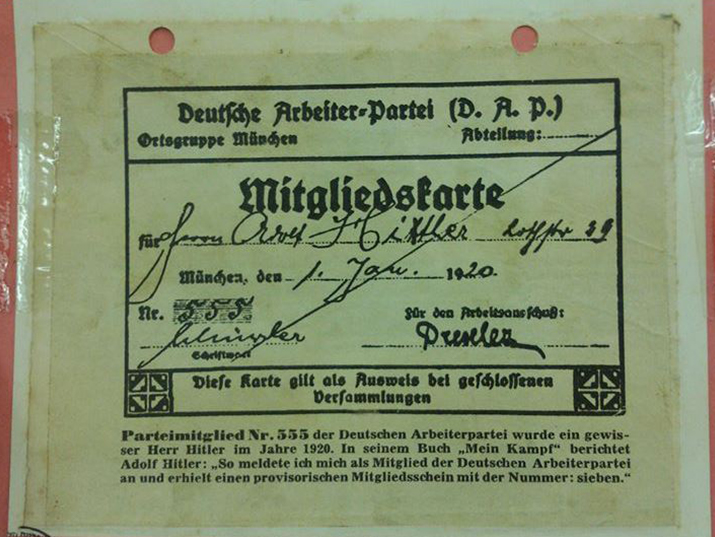 Adolf Hitler’s Party Membership Card. Though in Mein Kampf he claimed that he was the seventh member to join the Nazi party, this card proves that he was in fact the 555th

In 1907 a young man from a small provincial town in Austria arrived in Vienna, the European art capitol of the era, with hopes of enrolling in the art academy. His rejection led him roam the streets of “the other Vienna,” which many historians viewed to be a “school for the future dictator.”

The Vienna Hitler met with was not the same Vienna familiar to art lovers. The neighborhood where the impoverished young man lived was not one of the glorious cultural districts that had produced cultural and artistic greats like Gustav Klimt, Stefan Zweig and Arthur Schnitzler. The Vienna where Hitler lived was known as the Vienna of the sewers: a city where thousands of penniless young people wandered in search of a paltry income. It was a Vienna of poor men struggling to live in crumbling apartments or pay-by-the-day government subsidized public housing. This was a school for the future dictator: in Vienna, the multinational capitol of a mighty empire, Hitler encountered an array of cultures and “races.” He perfected the poisonous hatred of foreigners he had brought with him from his provincial upbringing. From his visit to the multilingual parliament he developed a hatred of democracy which he viewed as a nonfunctional system of government. He saw Vienna as a place where the glorious German race had deteriorated by mixing with inferior races, chief among them of course, the hated Jews.

His failure to gain entry to the art academy and the general failure that characterized his life was a blow to his pride. From a deep loathing of the miserable situation in which he found himself, Hitler was drawn toward German nationalism, which enabled young Austrians like him to see themselves as part of something greater than just themselves. They were the superior German race that will once again have the upper hand and rule over others. During those days when he was barely eking out a living from selling postcards with his drawings to passersby, he entertained himself with fantasies of the restoration of Greater Germany (which included Austria) and the part he would play in it.

The outbreak of World War I (known as The Great War for that generation) offered the young man an escape from the suffocating capitol. A year earlier he had crossed the border to Munich and in 1914 joined the German army. For most of the war he was running along the French/German front, a post he dutifully fulfilled at great personal risk. Word of the German defeat reached him in a hospital where he was recovering from a gas attack.

After the war, while looking for a job, he found his true calling: inspiring crowds to hatred and violence. As more and more crises plagued his new-old homeland Germany, the party he had founded rose higher and higher. In 1933, the man who declared himself Führer (the leader) of the Nazi party was appointed Chancellor of Germany.

The kind of popular politics that characterized Hitler was the politics of shrill and venomous attacks. They characterized his professional career as a dictator and led him on 1 September 1939 to form a temporary alliance with the Soviet Union and divide between the two powers neighboring Poland. After the West’s appeasement with Germany in Munich the previous year, Hitler believed that the occupation of Poland would also pass without much of a response. He was mistaken. The invasion of Poland, Britain and France’s close ally, sparked the most terrible war humanity had ever known. It was during this war that the most systematic and brutal genocide in the annals of history was perpetrated: the Holocaust of European and North African Jewry.

Adolf Hitler passed six directionless yet intense years in Vienna. In his autobiography from1924 he wrote, “Vienna was and still is for me the most difficult school but also the most profound I have attended.”

Historians have been grappling for generations with the question of whether history is created by great people or by great events? Either way, many historians, philosophers, and ordinary people believed that had a rather spoiled young man had been accepted to the academy of art in Vienna back in 1907, the world might have gained another mediocre painter but also would have avoided the most bloody and terrible war of all time.