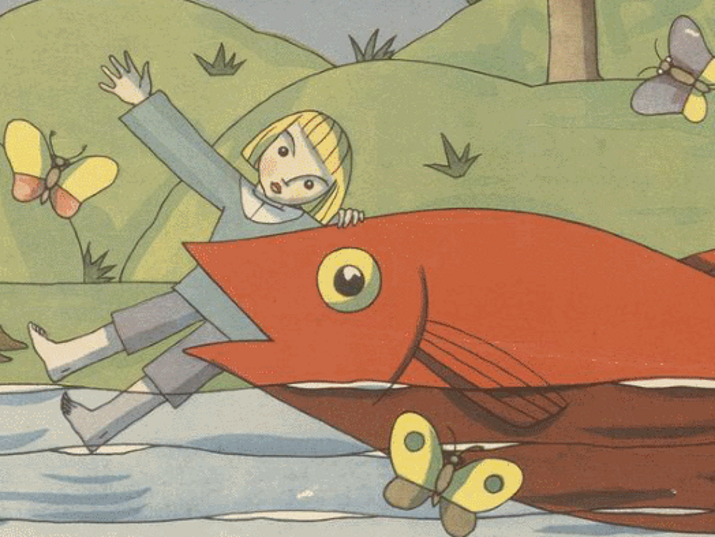 Illustration from The Fish’s Journey, written and illustrated by Tom Siedmann-Freud. Published by the Ophir publishing house, Berlin 1924

One day, Ori fell asleep in his bed. He dreamed he was walking along a street:
“Blue and red patched houses bowed before him, doffing their roofs. And lo and behold:  In his hands was a jar, and inside it, a fish!”

So begins Masa HaDag (The Fish’s Journey), the wonderful children’s story written and illustrated by Tom Seidmann-Freud, translated from the German into Hebrew by Hayim Nahman Bialik.

If the name Freud brings to mind images of bearded doctors scribbling in notebooks and patients lying on couches you are thinking in the right direction. Seidmann-Freud was the niece of Sigmund Freud, the father of psychoanalysis, and she wrote The Fish’s Journey from her close familiarity with the world of dreams and the subconscious. The hero of the story, Ori, goes on a days-long journey riding on the back of an imaginary fish and reaches a land where everything is good. The journey is rich is Jewish symbolism but also reminiscent of the glorious vision of Herzl in his Altneuland. Tom Seidmann-Freud wrote The Fish’s Journey following the first real tragedy to have struck her young life when her beloved brother Theodor died by drowning.

Tom was born in Austria in 1892 into the assimilated bourgeois Jewish Freud family.  Her given name was Marta Gertrud, but at age fifteen she chose to be called by the name “Tom.” The family wandered from Berlin to London, where Tom studied art. When she returned to Germany, she continued her studies in Munich where she published her first book of poems featuring her own illustrations.

Tom stood out as a promising and talented painter and illustrator. She and her beloved and beautiful sister Lilly would host folkstory-telling and singing evenings for children accompanied by games and slide shows featuring Tom’s illustrations which captivated both the children and the adults.


In Munich Seidmann-Freud became friendly with S.Y. Agnon, Gershom Scholem, and Zalman Shocken. The meeting led to a revolutionary attempt to create a Hebrew alphabet book with modernist illustrations and text by Agnon.

The partnership was not a success because Agnon had difficulty writing simple texts for children and Freud’s illustrations were too complex.

The project was aborted, but from this experience Seidmann-Freud hit upon a technique that became her favorite – hand coloring on stencil, which had the effect of making her illustrations appear translucent and magical.


In 1921 Tom met Yaakov Seidmann, a brilliant young man who in 1920 published a book of excerpts from The Zohar which he himself had translated into German. He and Tom fell deeply in love. They married in Berlin and their only daughter Angela was born the next year.

Berlin in those days, as it does today, boasted a large concentration of artists. Most of the Hebrew publishing industry centered in the neighborhood of Charlottenburg, which was also nicknamed “Charlottengrad” for the large number of Russian immigrants living there. Tom, Yaakov and their daughter Angela lived there too.

Between 1921 and 1923 hundreds of Hebrew books were published in Berlin. There were dozens of publishing houses. Dubnow, Bialik, and Ravnitsky were located in Charlottenburg and all were engaged in substantial publishing activity. 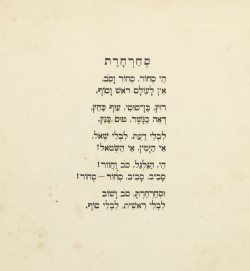 Bialik dreamt of establishing a publishing company specializing in children’s books, where the illustrations would be the main feature. He chose Yaakov Seidmann and Tom Seidmann-Freud as his partners in the endeavor.

“He and his wife are decent, young people and wholeheartedly dedicated to the endeavor,” Bialik wrote when work on the publishing house began and before his relationship with the couple soured.

Tom Seidmann-Freud drew the illustrations and chose the texts, Bialik translated them into Hebrew and wrote songs inspired by the illustrations.  The partnership produced four books in total, which would later be recognized as among the great books of Hebrew literature.

And Ori awoke and it was all a dream…

Those were turbulent times and economic collapse soon followed. Berlin became too costly to be able to earn a decent living or to publish books, and the Jewish immigrants left along with the artists and writers. Bialik was among the first to go. He immigrated to Eretz Israel in 1924. With his departure, the Ophir publishing house collapsed.

Yaakov Seidmann was mired in debt and asked for Bialik’s help. He wrote him anguished letters about his dire situation and about how he and his wife “never made even a single penny of profit from ‘Ophir’. The couple did not let their families know of their difficulties and tried to deal with it on their own. Yaakov Seidmann sold all of his possessions and was also forced to sell his personal library, but he still could not get out of debt.

On June 1st, 1929, Tom Seidmann-Freud was sitting with friends when she was suddenly summoned to return home. She went with her seven-year-old daughter Angela to their house in Charlottenburg, where she found her beloved husband hanging from the ceiling with a rope around his neck.

The delicate, sensitive illustrator never recovered from her husband’s death. She fell into depression and stopped eating. She was hospitalized, but no one from her family and friends, not even her uncle Sigmund Freud who came to visit and to care for her was able to lift her spirits. After a few months, she died of anorexia at the age of thirty-eight.

Special thanks to Dr. Gil Weissblei from the National Library of Israel Archives Department for his help writing this article.