Sukkot During World War I: Open Roofs and ‘Mysterious’ Ditches

Photo taken by an Austrian soldier provides a rare glimpse 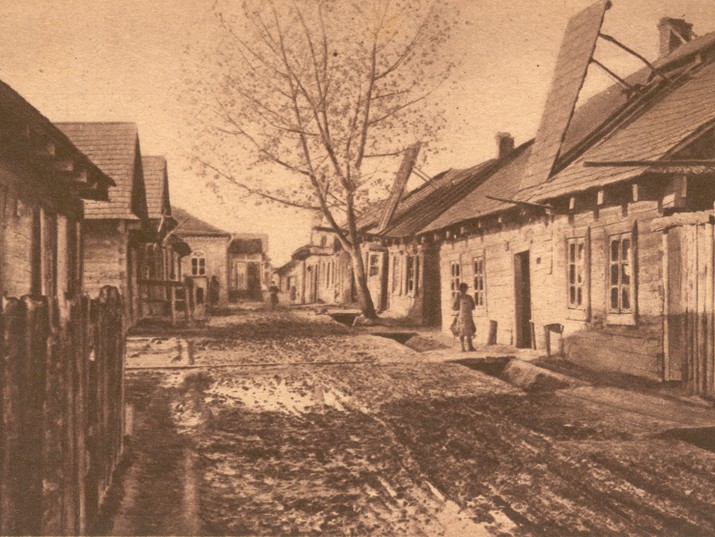 Ditches at the entrances to all of the homes. Opened roofs. The year 1916 appears under the photograph featured on an aged postcard.

The setting: Seppl Alley, a Jewish street in Ivanovo – known as “Yanov” in Yiddish – a town then in the Russian Empire, near Pinsk in modern day Belarus.

The photo was taken during the Jewish festival of Sukkot, two years into the Great War.

Two elements stand out in particular: the houses’ opened roofs and rectangular ditches in front of every home.

The roofs can be rather clearly understood.

When the Jews of Ivanovo built their homes, they included a distinctly Jewish element found in many communities: roofs that opened up. When the holiday of Sukkot came every year, they would open up the roof, lay the traditional skhakh (covering for the sukkah made of natural materials) and live in their sukkah in accordance with Jewish law without having to fully leave the warmth and protection of their homes.

It was October in Russia, after all.

The ditches in front of the homes seem a bit more mysterious, though given the historical context it becomes clear that they are actually protective trenches, dug to safeguard the town’s residents from gunfire, a clear and present danger during this time of war.

The image is part of a series of photographs taken by the Austrians as they advanced into Russian-held territory during that particular stage of the war. It’s interesting to note that the photographer almost certainly had no idea what he was looking at and was likely confused by the locals opening their roofs in the middle of the chilly Eastern European autumn.

The postcard was published by “Verlag für allgemeines Wissen” (“Publisher of General Knowledge”), which distributed various images of the areas occupied by the Central Powers, particularly in Eastern Europe. It was part of the larger wartime propaganda effort.

This rare photo was captured by an anonymous Austrian soldier, perhaps providing the only surviving evidence of what Sukkot was like in Ivanovo in 1916.

Thousands of other soldiers on both sides carried private cameras into battle with them throughout the First World War. Some of the photos they took were kept in private hands, other were published in unit books or commemorative pamphlets. Some found their way onto the auction block or into public collections, while others – like this one – were featured on postcards, sold for pennies in markets and shops across Europe.

While the experiences of life during that cold Sukkot over a century ago will remain in the realm of the unknown, the residents of Seppl Alley certainly tried – despite the difficult circumstances – to fulfill the ancient commandment to “rejoice in your feasts” during the festival of Sukkot.