The Story of Daniel Hagège: Judeo-Arabic Author and Documenter of Tunisian Jewry

Hagège estimated that some 150 Tunisian authors wrote in Judeo-Arabic. This article is in memory of 100 years of Judeo-Arabic literature. 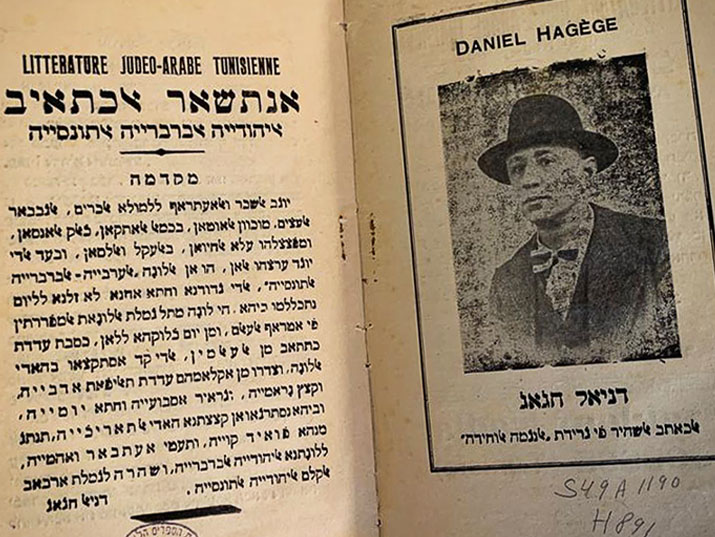 The story of Judeo-Arabic literature in Tunisia is one of defeat; not only because the language in which this literature was written has disappeared due to the French and Hebrew prevailing it – but because it seems that this unique literature was never given a real chance to flourish.

Judeo-Arabic literature lasted in Tunisia for a mere 100 years. It began in 1862, when a partnership was formed among three Jewish writers: Mordekhai Tapia, Bishi Chemama, and Eliyahu Elmaleh. Their first book printed in Tunis was called Qanun al-dawla al-tunisiyya (“The Constitution of the Tunisian State”).

A year later, books containing folk literature began to be published. At first, they were copied by hand under the supervision of the author, storyteller, and tavern-owner, Hai Sarfati, and later at Uzan and Castro’s publishing house. In 1878, Abraham Tayyib founded the first newspaper in the country, called al-Amala al-tunisiyya (“Tunisia Province”).

Much of what we know about this literature we owe to the work of Daniel Hagège. Next to the French Eusèbe Vassel, Hagège (occasionally written as Ḥajjāj) is the greatest documenter of this rich literature, which consists of hundreds of original stories and translations. He was also one of the last authors to publish his works in Judeo-Arabic. In 1939, Hagège published a book titled Intishar al-ktayib al-yahudiyya al-berberiyya al-tunisiyya (“The Publication of Tunisian Judeo-Arabic Books”, translated into Hebrew by Joseph Tobi and Zivia Tobi, Wayne State University Press, 2014). Some of Hagège’s many books have vanished completely, with the only remaining traces being a few details mentioned in this text. Hagège listed the published works of the Judeo-Arabic authors alongside biographic information about their lives and literary and professional work. Intishar al-ktayib was published at Makhluf Najjar’s printing house.

Thanks to this detailed bio-bibliographic list compiled by the author, we know that Judeo-Arabic literature, which emerged in Tunisia during the mid-19th century, was influenced by different elements. Firstly, Arabic literature; Judeo-Arabic literature was written in Arabic, peppered with Hebrew, French and Italian. Many other books and stories were translated literary classics from around the world, primarily France. These included works such as The Mysteries of Paris, Robinson Crusoe, and adaptations of One Thousand and One Nights, which drew from Antoine Gallan’s French translation.

Before we read the work’s translation by scholars Joseph and Zivia Tobi, we assumed Hagège wrote his bio-bibliography because he wished to save this literature from vanishing into obscurity. In the book’s introduction, right after the acclaims – “Thanks must be given to the supreme God, the mighty and the terrible, creator of lands, with the perfection of wholeness, creator of man, and who places him above animals in understanding and language,” (translation: Joseph Tobi and Zivia Tobi, Wayne State University Press, 2014) Hagège clarified what drove him to write the book. It appears the author was quite confident that the language and its literature would last, and so he wrote: “After this, what will be set forth now is that the ‘Tunisian Arabic-Berber’ language, which our forefathers and even we ourselves have never ceased to speak to the present day, is a language like all the languages scattered all over the world. From the day of its creation until today it has been reinforced by a large number of learned writers, who were able to use this language, and they penned a great many literary compositions and love stories and weekly journals and even daily newspapers. We hope therefore that our historical essay will produce many benefits and will bestow esteem and honor upon our Jewish-Arabic language and renown to all the Tunisian Jewish master writers.” (Translation: Joseph Tobi and Zivia Tobi, Wayne State University Press, 2014)

Hagège estimated that some 150 Tunisian authors, all of them men, wrote in Judeo-Arabic. His compilation lists bio-bibliographic details of 17 of them, including the author himself. Hagège summarizes his work in a few self-praising sentences, followed by a list of the 30 books he published.

“The journalist Daniel Hagège, who has written for the journal al-Najma al-waḥīda since its revival, was born in our city of Tunis on July 15, 1892. After completing his schooling, a graduate of three grades in basic studies, he began working at the printing house with the revered writer the late Ya‘aqov Ha-Cohen on the weekly al-Shams and the daily al-Ṣabaḥ. This was in 1904. On October 21, 1910, this writer was appointed chief editor of the weekly Ḥayat al-janna, which lasted for several months. On August 1, 1913, he founded a magazine called al-Nuzha al-tunisiyya (“Tunisian Pastime”), which continued to appear until the end of 1915. It was revived in 1933 when seven issues were published. Thereafter it closed by order of the government. In 1914 he published an important book titled Anwar tunis (“Flowers of Tunis”), which contained the account Sabab takwin ḥarb uruppa (“Causes of the Development of the European War”) and the story al-‘Ishq wa-al-ḥubb ma fihim ṭibb (“There Is No Remedy in Lust and Love”) and several stirring Arabic articles and amusing tales.”

Like many Jewish authors and journalists in Tunisia, Hagège made a living outside of literary writing and had a completely separate profession. The most interesting part of Hagège’s biography is his “secondary” income, which was, in fact, his main income: “And from April 1924,” writes Hagège, “He began to work for one year as a mixer of medicines at the pharmacy of the Greek opposite Sinigalia on the square. From 1926 to 1930 he worked at the Suq al-Grana with the late Rabbi Eli‘ezer Farḥi, the pharmacist famous for his wisdom in plants and essences. Afterward he himself opened a shop at 4 Sidi al-Sridek Street in Tunis. This shop became well-known to everyone, as they came to learn of its great usefulness.” (Translation: Joseph Tobi and Zivia Tobi, Wayne State University Press, 2014)

Daniel Hagège belonged to the last generation of Jewish Tunisian authors. He ceased writing in Judeo-Arabic in the 1940s. In his bio-bibliography, he stressed that readers did not appreciate the hard work and high expenses of publishing Judeo-Arabic newspapers and books. They preferred to loan a copy rather than buying one. “Alshari wahid w’alkari asharh,” Hagège noted, meaning: “One buys, ten read.” (Translation: Joseph Tobi and Zivia Tobi, Wayne State University Press, 2014).

In 1959, Hagège immigrated to Paris. He died in 1976, and, in accordance with his last will and testament, the last Jewish author of Tunisia was buried in Jerusalem.