The Woman Who Ignited the Hasmonean Rebellion

Home > Hanukkah > The Woman Who Ignited the Hasmonean Rebellion
Judaism

Very few know her story. It isn’t taught in schools and certainly not in kindergartens, but according to the midrash, Hannah, daughter of Matityahu, sister of the Maccabees, was a key figure in the Hanukkah story. What does the midrash tell us of the woman who stood up to protect her Jewish sisters? How did she use her wedding day to spark the fire of rebellion in her brothers? 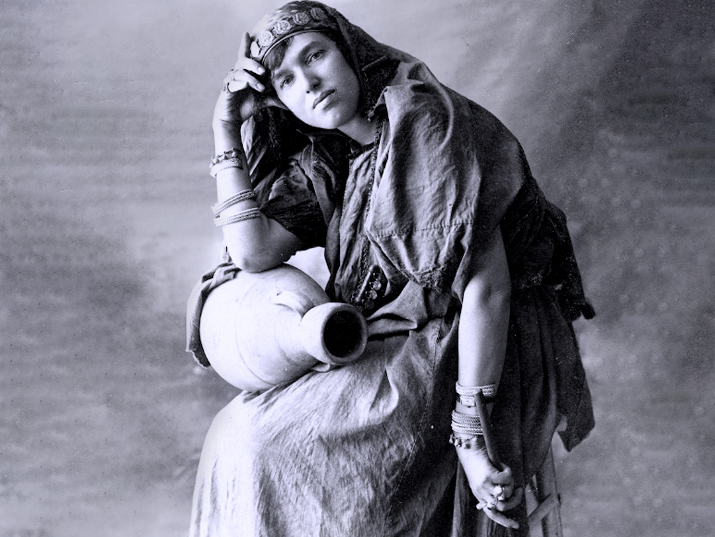 Elizabeth Richman holding a jug, 1926. Courtesy of Archive Network Israel in collaboration with the Yad Ben-Zvi Institute, the Ministry of Jerusalem and Heritage and the National Library of Israel

According to the midrash, the entire Hanukkah miracle is based on the act of one brave (and today largely forgotten) woman who dared to speak aloud what everyone else knew but would not say. Her declaration led her brothers to start a rebellion. She was the true heroine and instigator of the festival of Hanukkah.

Her story is not taught in schools, certainly not in kindergartens. Her name was Hannah, daughter of Matityahu, sister of the Maccabees.

According to the midrash, the Jews, then living under Greek Seleucid rule, had remained silent for three years; three years in which every woman who married would first be raped by the local Greek governor before she could enter her husband’s house. This is how the midrash describes it: “When the Greeks saw that Israel was not affected by their decrees, they stood and decreed upon them a bitter and ugly decree, that a bride would not go in [to her husband] on her wedding night, but rather to the local commander” [all quotes from Midrash Ma’aseh Ḥanukkah “alef,” A Tale of the People’s Resistance to the Seleucid Greek Occupation].

It is awful to imagine how many women underwent this violation and humiliation. The midrash tells us that the men of the Hasmonean family did nothing. And the women of Israel fell victim again and again to the abuse.

Then came the wedding day of Matityahu the Hasmonean’s own daughter Hannah. This time, Hannah decided to put an end to the ongoing atrocity. In the middle of the wedding banquet, while all the distinguished and important guests were eating and enjoying themselves, she stood up and ripped off her wedding dress, leaving herself naked in front of her family and friends.

“And when everyone was sitting down to eat, Ḥannah, the daughter of Matityahu, stood up from her palanquin and clapped her hands one on the other and tore off her royal garment and stood before all of Israel, revealed before her father and her mother and her groom!”

At first, her brothers reacted with anger and shock. They wanted to kill her for having disgraced them and for shaming the family and herself.

But she, in turn, scolded them for turning a blind eye, all the while knowing what awaited her that night at the governor’s palace. Not one of them had raised a finger, not one had stood up to protect her dignity. She reprimanded her brothers for being angry at her nakedness in front of them, even as they remained calm at the thought of her having to go later that night to the governor who would sexually assault her.

“She said ‘Listen, my brothers and uncles! So what—I stand naked before you righteous men with no sexual transgression and you get all incensed?! And you do not become incensed about sending me into the hands of an uncircumcised man who will abuse me?!’”

She forced them to face up to the bitter truth. According to the midrash, this was the moment her Maccabee brothers first raised the flag of rebellion.

The first question that comes to mind when someone hears this story is – did this really happen?  After all, this isn’t a story that is told as part of the typical Hanukkah celebration. We know the story of the miracle of the jar of oil, we know all about the victory of the Maccabees over the Greeks and the heroism of Judah the Maccabee. But the story of the woman who incited the rebellion, or the story of the sexual exploitation that was behind the uprising isn’t common knowledge.

Among the Ashkenazi communities of Europe, the story of Hannah, whose name may derive from the name of the Hanukkah holiday itself, appears in some sources, but she is occasionally referred to anonymously as bat Hashmonaim – a Hasmonean daughter. In the communities of North Africa, on the other hand, they tell the story of Judith who beheaded the Assyrian general Holofernes, and whose heroism is recorded in a slightly different way in the apocryphal “Book of Judith.” Some researchers suggest that these two women—“bat Hashmonaim and Judith—are one and the same.

I think the more interesting question we need to ask ourselves is why hasn’t this story been told more often? I believe that the story of Hannah, daughter of Matityahu, has remained hidden or suppressed because of its complexity. Telling this story, a tale of silenced sexual violence, can be a disturbing experience. It is much easier to tell the story of a military triumph of good over evil as we light our menorahs and eat our jelly donuts.

But Hannah’s story is an important one and its telling is long overdue. It is a story that can bring about a real change, even today.

Rashi’s commentary on the lighting of the Hanukkah candles in the tractate Shabbat offers additional evidence for the significance of Hannah’s role in the Hanukkah narrative. The question is asked whether women are obligated to fulfil the commandment of lighting Hanukkah candles. The answer is affirmative, women are obligated and the Talmud’s explanation for this special obligation is that women were partners in the Hanukkah miracle and are therefore also obligated in lighting the candles that commemorate the miracle.

Rashi writes of the Hanukkah miracle and Hannah’s role in it: “Since the Greeks decreed upon all the virgins getting married to have intercourse with the high official first. And the miracle happened through a woman.” Rashi, the great commentator of the Bible and Talmud, offers here a concise interpretation of the female heroism behind the Hanukkah story and its female protagonist. He makes the claim that a woman wrought this miracle, and for that very reason, to this day, women are expected to light Hanukkah candles.

Of course, this is not proof that the story happened necessarily, but it is evidence that it is not new either. Rather, it is an ancient story reflecting a familiar reality from various times in Jewish history passed down in Jewish tradition.

The story of Hannah, daughter of Matityahu, is a harsh one and it remains hidden and untold. But in my view, it is the most important story there is.

Hannah expresses the voice of silenced women throughout the generations, right up to this very today. She shows us how important it is for us to stand up for each other. She reminds us to support and help those women whose voices have been taken from them through violence. She teaches us that sometimes the baring of the naked truth, no matter how painful, is the only way to create change.

Hanukkah has a female hero. A hero whose strong voice resonates in today’s painful Israeli reality. A hero who implores us to look around and see who is in need of help. If we dare to place her story in the center of our discourse, if we dare to tell of her brave act, we can strengthen female voices that choose not to remain silent and give voice to the wronged women who have been silenced throughout history.