A Cinderella Story: The First Winner of the International Bible Contest

Home > History of Israel > A Cinderella Story: The First Winner of the International Bible Contest
Land of Israel

Overnight, Amos Hakham, winner of the first International Bible Contest, became an Israeli celebrity. From that point on, the Israeli public just couldn’t get enough of him… 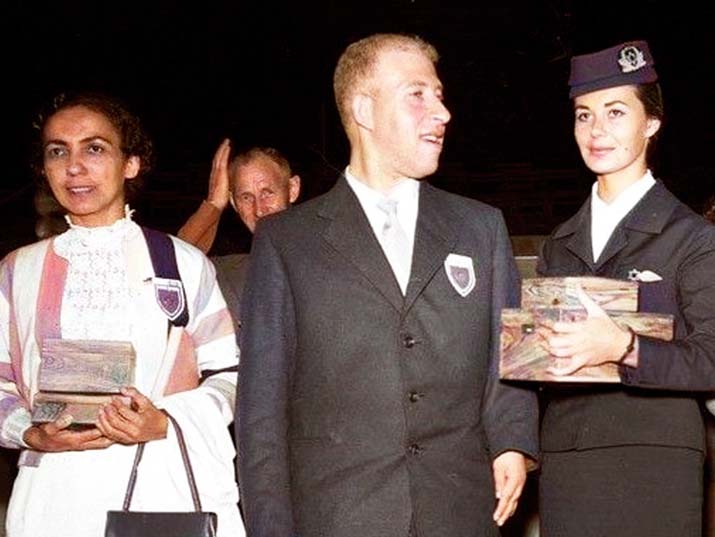 “Some people spend their free time reading novels or crime fiction. I read the Bible,” said the first winner of the International Bible Contest. His name was Amos Hakham, he had cerebral palsy and suffered from a speech impediment. Yet, Hakham proved himself an extremely knowledgeable young man, despite not receiving any formal education – he did not attend elementary or high school and did not study at any institution of higher learning. He was 37 years old when he won the coveted title, suddenly becoming famous and receiving widespread admiration from the Israeli public.

Hakham was born in Jerusalem in 1921 without any disability, but before his first birthday, he suffered a traumatic head injury that left him with cerebral palsy and a speech disability. His father, Dr. Noah Hakham (after whom Amos’ son would eventually be named), decided to home school the boy, fearing that the neighborhood children would bully him. Amos Hakham thus never attended a “regular” school. At the age of 29, after both of his parents had passed away, he found a low-paying job as a clerk at the School for the Blind. While his employer greatly appreciated his dedication, day after day Amos would wait impatiently for his shift to end, so that he could go home to his small, modest room, where his only possessions were his books. There, he would pore over the Bible—his most favorite book of all.

In 1958, thanks to an initiative spearheaded by Prime Minister David Ben-Gurion, Hakham was given an opportunity that changed his life. Even before the establishment of the state, Ben-Gurion had worked to renew and strengthen the Jewish people’s ancient affinity to the Bible. In accordance with his belief that “the Bible is the secret of the Jewish people’s existence and eternalness,” with the establishment of the state, Ben-Gurion supported various initiatives to consolidate a new Jewish-Zionist tradition. Some of the initiatives were complete and utter failures, such as the “Independence Haggadah.” A few were resounding successes— the International Bible Contest was the most significant of these.

The International Bible Contest we know today is a quiz for Jewish youth, broadcast live every year on Yom HaAtzmaut, Israeli Independence Day. But the contest was originally a Bible quiz for adults, launched during the state’s celebrations of its first decade of existence. Back then, the contestants were not only Jews, but people from all over the world.

The announcement of the upcoming Bible contest took Hakham by complete surprise. He didn’t see himself as a possible contestant, but his neighbors, well aware of the depth of his knowledge of the Bible, pushed him to enter. He successfully passed the first screening round which was conducted in writing, and was invited to the next stage—the national quiz. What troubled Hakham however was not his biblical knowledge but his financial situation, namely how was he going to afford a decent suit for the stately event. In the end a neighbor offered to loan him one.

The National Bible Quiz for Adults took place on August 4, 1958 and aroused enormous excitement among the Israeli public. From the start, Hakham demonstrated an impressive proficiency, easily and precisely answering every question. After handily winning the national quiz, he advanced to the next stage—the International Bible Contest held later that month. Again, he won first place, outsmarting his competitors who had come from all over the world. An excited Prime Minister Ben-Gurion awarded Hakham the first prize and immediately after, invited him to his office where they talked, of course, about the Bible.

With his win, Hakham’s life changed completely. He began academic studies for the first time and eventually became an important Bible scholar. He wrote commentaries for several books of the Bible as part of the Da’at Mikra series, which are known for their clarity and thoroughness. About two years after winning, Hakham married Devora Atas, and the couple had a son, Noah Hakham.

But we’re getting ahead of ourselves. With his win, Hakham quickly became known as a world expert on the Bible and he began receiving inquiries, from everyone from fourth graders to major corporations, research institutes and universities. He was even asked to suggest Bible verses suitable for decorating the halls of the Knesset, Israel’s parliament building. Even after many decades, his fame as the winner of the first International Bible Contest did not wane and he continued to receive letters and requests.

One interesting request came from the commander of a new secret Israeli army intelligence unit, who asked Hakham to propose an animal from the Bible that would be a fitting symbol for the unit’s spirit and goals. Would the eagle be a good choice or was there another animal that might be more suited?

From time to time, Hakham was called in to settle a family dispute, such as a dramatic debate over the name “Nimrod”. Was this a suitable Hebrew name? Or the name of an evil idolator?

Hakham was even asked to contribute his biblical knowledge in legal matters. In the next letter, the issue at hand is whether a child of divorced parents can have her last name legally changed to that of her new stepfather.

Before the Google age, Hakham was also called upon as a human search engine for verses from the Bible. For example, the poetry translator Yehoshua Kochav maintained an extensive correspondence with Hakham who helped him in his translations of biblically inspired poets such as William Blake and John Milton.

Hakham’s love (one could also say private obsession) for the Bible was what made him so sought after. And along with requests for help, many wanted to reward him for his knowledge with various and sometimes unusual perks. At Ben-Gurion’s order, Hakham received state-funded treatments from Dr. Moshe Pinchas Feldenkrais, whose method of physical exercise and movement was said to improve a person’s quality of life. The Egged Public Transportation Company awarded him a lifetime of free bus travel. In Hakham’s archives, you can even find a letter from politician Pinchas Lavon asking where he preferred the location of the apartment that the Histadrut (the national labor union) had decided to purchase for him. These were only a very small part of the rewards showered on Hakham.

How did the once anonymous Amos Hakham deal with his unexpected celebrity? In a conversation with us, Amos’ son, Prof. Noah Hakham, recalled that his father reacted mainly with humor. His father would say, “It’s just easier for someone to call me instead of looking for the biblical verse in question using a Bible concordance.” Although Noah was born five years after his father’s success, he remembers the many phone calls Amos received at all hours of the day, usually from a stranger with a burning biblical question. “From someone who wouldn’t be given a second glance or even a first glance on the street, he became the most famous man in the country,” said the son of his father’s transformation.

Amos Hakham passed away in 2012, at the age of 91, 54 years after the achievement that changed his life. Hakham’s archive was deposited at the National Library of Israel, in which are preserved, among other items, the letters presented in the article.

We conclude the article about this fascinating man with Hakham’s own words, words that largely defined his life, and which he wrote immediately after winning the contest in 1958: “There are facts that even the most resounding applause of all the citizens of the country will not change. Being disabled is one such fact. And every disabled person can follow one of two paths: one is isolation, escaping from active life and depending on others. This path seems at first to be the easiest way out, but it ends in depression and decay. This had been my path from the day I was able to decide things for myself. Although, in my heart I always felt that this is not the right path, that there is another way, a path of complete integration into life, while developing qualities and talents that lie hidden in every person,  and that can serve as a kind of substitute for what was lost and cannot be recovered.”