Not Your Bubby’s Gefilte Fish

The sweet and (un)savory story behind the traditional dish. 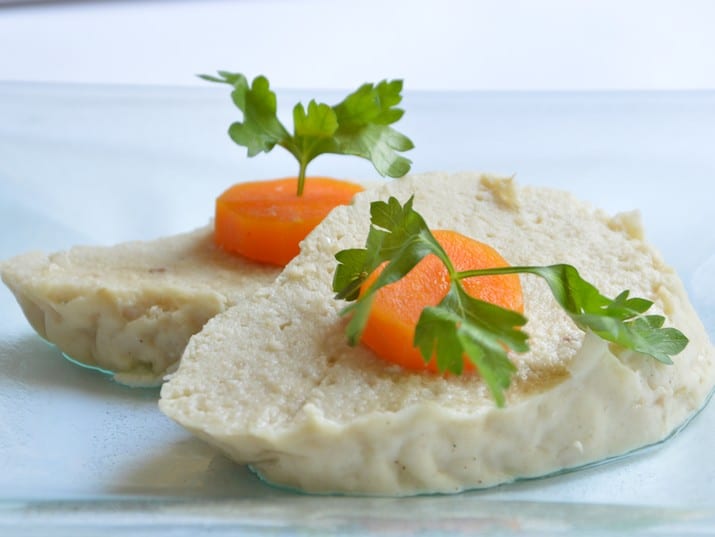 Three Nazis walk into a Kosher restaurant in Warsaw.

While this may sound like the opening of an unsavory joke, it is actually a true story.

In October 1934, three “Hitlerite journalists,” on assignment to Poland from Berlin, were strolling through the streets of Warsaw in search of a good meal when they entered “Metrepole,” a Jewish, Kosher restaurant. The men took their seats, perused the menu and proceeded to order one of the oldest known Jewish delicacies of all time: gefilte fish.

As the guests enjoyed their meal and a nice glass of whiskey, they requested that the in-house orchestra play on repeat, “this wonderful Russian Melody,” the traditional song of Kol Nidre, a prayer that is recited on Yom Kippur, the Jewish Day of Atonement.

The visitors finished off their gourmet meal and left the restaurant after giving their complements to the chef – “Auf Wiedersehn!”

It may seem strange to our modern sensibilities that a Jewish food as odd as gefilte fish would be available on a Warsaw restaurant menu in the first place, never mind that these particular guests would even order the dish.

For those who are not familiar with the traditional food, gefilte fish is a dish typically made of a combination of several different fish that are ground up and shaped into croquettes before being cooked. The dish is traditionally served on Friday night in honor of Shabbat dinner with a side of chrein, a dip made of horseradish and beets. The classic fish dish can be made in a salty or sweet preparation and, believe it or not, it is hotly debated which version is the proper dish. In fact, there is a defined “Gefitle fish line” that had been drawn through Jewish Eastern Europe on the salty/sweet divide.

Born out of necessity in Europe, the preparation of gefilte fish was a way for impoverished Jewish families to stretch whatever piece of the pricey protein they could afford by adding onions, eggs, and matzoh meal. Gefilte, meaning “stuffed” in Yiddish, describes the method of preparation in which the skin was removed, and meat of the fish itself was ground up with the rest of the ingredients before the mixture was stuffed back into the skins in preparation for cooking.

Not only did this method help stretch a small portion of fish, it also remedied an issue in Jewish law faced by fish eaters on Shabbat. Borer, the prohibition against separating, prohibits the removal of bones from the flesh of the fish on Shabbat. By grinding up the fish together with the bones, there is no longer anything left to be picked out.

With the complicated process of preparing this traditional Jewish dish, there was a large market open to Jewish food companies to create an easier, more accessible version. In 1931, for the first time, the spicy goodness that is gefilte fish was “successfully imprisoned in cans,” by Ethel’s Food Products Inc, with the Kosher seal of approval from a rabbi in Chicago. The exciting announcement promised a superior flavor to the homemade version and ensured the use of first grade materials processed on sanitary equipment.

Thus was born jarred jelly coated gefilte fish as you know it today (they come in cans as well). Kosher food companies vied for that coveted spot at the Shabbat table promising “Gefilte fish like your mother used make- only if your mother made great gefilte fish.”

This Jewish delicacy- the epitome of Jewish soul food, is featured in Jewish art, books, and has several Yiddish folk songs written in its honor. One song, written sometime in the late 1800’s, found itself featured on Israeli radio! The lyricist describes the wonderful texture and the melt in your mouth flavor that gefilte fish has to offer every Shabbat at your mother’s table.

It’s a thousand flavored treat First tasted at my mother’s knee, It’s precious, it’s so good, It’s the Jewish national food As you eat, it melts right in your mouth, The gefilte fish themselves are Jewish.

With a musical endorsement like that, who could resist temptation?

Gefilte fish, the little dish that could, has become such an iconic symbol of Jewish cuisine and culture across the world that it even has a festival named in its honor. Gefiltefest is an annual celebration that explores Jewish heritage, tradition and culture through food that is hosted annually in Europe.

So, the next time you find yourself at your grandma’s Shabbat table at a meal featuring those jelly coated fish loaves, consider giving them a try. Hundreds of years of Jewish tradition can’t be wrong…right?

Check out this recipe for Gefilte fish taken from an 18th-century manuscript from Otensoos in Bavaria that is now preserved at the Central Archives for the History of the Jewish People. The recipe is written in German using Hebrew letters.

Gefilte Fish: Take one fish, large or small. Let the fish handler slit it, wash it clean and salt it well. Make the following filling: Take a small white fish and fillet it. Chop it finely with parsley, yellow carrots, raw eggs, an onion and chives. All of these should be chopped very small. Form into two white rolls while wet. When all this is done, put a large spoon of fat into a covered pot and allow it to melt. Slice an onion into the fat and braise until golden, then add vegetables and allow to simmer. Take bread and leave to boil for a while. Then put it aside and crack a few eggs into it. The filling needs to be thick. Add ginger, pepper, lemon juice and some yellow (perhaps carrots?). Fill the fish and cook it in butter, fat or oil.