A Look at the Figure of Gabriel the Archangel

Gabriel, the archangel in charge of Heaven's heavy lifting 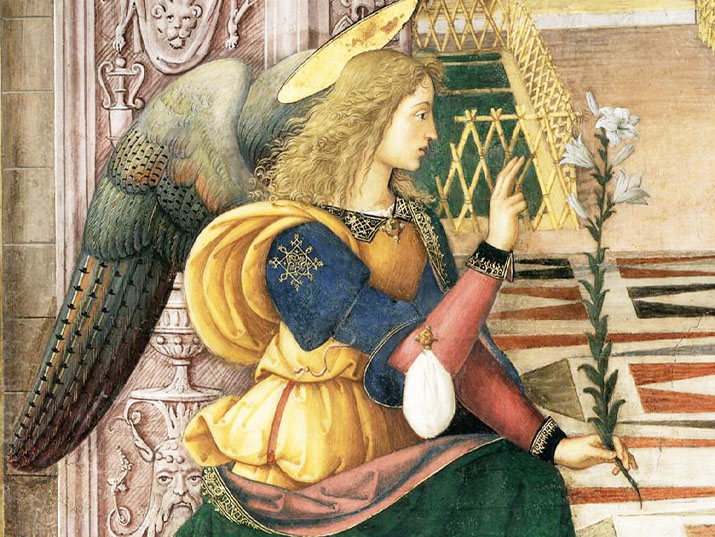 The figure of Gabriel the archangel in "The Annunciatiion", by Pinturicchio, 1501

“In the third year of Cyrus king of Persia,” the prophet Daniel beheld one of his remarkable visions. On the bank of the great Tigris River, Daniel looked up and before him was “a man dressed in linen, with a belt of fine gold from Uphas around his waist. His body was like topaz, his face like lightning, his eyes like flaming torches, his arms and legs like the gleam of burnished bronze, and his voice like the sound of a multitude” (Daniel 10: 5–6). Though not alone at the time, Daniel testifies that he was the only one who saw this initially menacing figure, who quickly calmed him and revealed that ever since Daniel had devoted himself to prophecy, the figure had in fact served as Daniel’s protector and guardian. The miraculous being gently touched Daniel’s hand and affectionately reassured him, saying: “Do not be afraid, you who are esteemed . . . Peace! Be strong now; be strong” (19).  The figure also clarified the purpose of the revelation, telling Daniel that all the miseries of the people as a result of the struggles against the mighty empires of Persia and Greece were about to come to an end, adding that the archangel Michael, “your prince”, had come to his aid, and victory was imminent.

The ancient and medieval Jewish sages identified this miraculous being with the figure of the archangel Gabriel who is explicitly mentioned by name in the two previous chapters of the book of Daniel (8: 16; 9: 21–22). This is a unique revelation in the biblical landscape: in contrast to many of the other biblical angels that serve as Divine messengers and then vanish once their mission is completed, here we have an angel mentioned by name, who functions as a guardian angel!

In the Jewish apocryphal First Book of Enoch, which tells of the heavenly ascension of the biblical Enoch, the fifth generation between Adam and Noah, Gabriel appears as one of the archangels who, in the end of days, will destroy the corrupting angel Azazel and his minions who have overrun the Earth. This is perhaps the first time in Jewish scripture that mention is made of a heavenly conspiracy against God—telling of Azazel’s army of fallen angels that descended to Earth as part of an open rebellion against God (a story linked to the tale of the sons of God and the daughters of man in Genesis 6). In the First Book of Enoch, Gabriel is described as “one of the holy angels, who is over Paradise and the serpents and the Cherubim”, while Michael serves in a position similar to the one described in the book of Daniel – a protector of the Israelites, the commander of the heavenly hosts.

In Talmudic and Midrashic literature, Gabriel usually appears as Michael’s companion: both serve as archangels charged with the safekeeping of the Jewish people. If Michael usually appears in the form of water and snow, Gabriel—the same figure mentioned in Daniel as having “a face like lightning, his eyes like flaming torches,” usually appears as a fiery flame. Sometimes the descriptions are reversed.

Perhaps because of his connection to fire and lightning, Gabriel is occasionally portrayed as a “harsh” or “hard” angel (“מלאך קשה”, Eicha Rabba [Lamentations Rabba], Buber edition, Parsha 2e, “Then I heard him call out in a loud voice,” 49b) whom God charges with punishing sinners and inflicting on them various calamities. In Bereshit Rabba (Parsha 51b, Theodore Albeck Edition, p. 533), he is revealed as the destroyer of the sinful city of Sodom, and in the Babylonian Talmud (Sanhedrin 95b) as the smiter of the camp of the Assyrian King Sennacherib. But as the saying goes, he who is cruel to the wicked, ends up pitying the merciful—besides the severe blows Gabriel inflicts on sinners and evil-doers, he is also the one who saves Abraham from the fiery furnace and ensures the ripening of fruits in time to feed the hungry.

The Kabbalah adopted the figure of Gabriel, and identified him with the emanation of judgment. The archangel of the Jewish apocrypha now stands to the left of the archangel of greatness and grace, who is none other than his comrade-in-arms, Michael.

From his first appearance in the biblical Book of Daniel, Gabriel the archangel’s impressive career has extended well beyond sacred Jewish literature. Gabriel also features in the scriptures of Christianity and Islam, where he is considered an angel with a central mission of revelation.

In the New Testament (Lucas 1: 19, 26), Gabriel returns to the role of heralding angel. He appears before the parents of John the Baptist as well as before Mary, the mother of Jesus, to announce the coming births of their respective sons. His figure is immortalized in Christian art of the Middle Ages and the Renaissance, as in the Annunciation painting in the Uffizi Gallery in Florence, thought to be an early work by Leonardo da Vinci, which depicts the moment when Gabriel visits the Virgin Mary and makes his dramatic announcement.

In the Qur’an, Gabriel carries the word of Allah to Muhammad. Islamic tradition adopted Gabriel as a messenger, and in ancient surahs he was called “the messenger,” or “the noble messenger”. Some interpretations even attribute references to “the Holy Spirit” in Islam to Gabriel.  Islamic literature is filled with stories of Gabriel’s rescue of prophets from distress, and in almost every dramatic turn, he is mentioned as an aide to the heroes of the scriptures. He is the one who comforts Adam after his expulsion from paradise, saves Abraham from the burning furnace (again), stands by Moses in his quarrel with the magicians of Egypt and teaches David to ready his armor.

We began with an interesting point related to Gabriel’s appearance in the Book of Daniel, as the first angel— together with Michael—mentioned in the Bible by name. It is worth returning to this. The book of Genesis tells of Jacob crossing the Jabbok River with his family on his return from Haran to the land of Canaan after fleeing Laban the Aramean. After Jacob leads his family to safety, he is left alone, and throughout the night, he struggles with a mysterious unidentified man. Only the next morning, after Jacob has overcome the man, does the figure reveal himself to Jacob as an angel of God, and perhaps even God himself: “And Jacob called the place Peniel, saying, ‘It is because I saw God face to face but my life was spared’” (Genesis 32: 31).

We recall this dramatic scene mainly because of the blessing Jacob requests and receives from the angel, when Jacob is given his new name, Israel. The part of the story remembered less is Jacob’s question to the angel after receiving the blessing. Jacob asks the angel’s name, but the angel evades the question with one of his own and blesses him instead, “Why are you asking about my name? And he blessed Jacob” (Genesis 32: 30). In the first volume of his book History of Hebraic Mysticism and Esotericism (Hebrew, תולדות תורת הסוד העברית) Joseph Dan points out a puzzling fact that casts the story of Jacob and the angel in a new light, and hints at the period of the Book of Daniel’s writing.  Dan writes:

“For about a thousand years, throughout the biblical period, Judaism had several names for the Divine, but not a single name of an angel. In the Second Temple Period, the Divine names were exchanged for general names and monikers, while the names of angels were in the dozens and   hundreds . . . We know absolutely nothing about the motives of this process.”

Gabriel’s appearance as a guardian angel in the great vision described in the Book of Daniel is one of the proofs that the Book of Daniel’s apocalyptic visions were actually written in the early days of the Second Temple. The events of destruction and ruin under the waning Persian Empire and rising Greek Empire are described in apocalyptic and enigmatic language, mostly in Aramaic. Although they are presented as a prophecy of an event hundreds of years in the future, they actually describe the period when the book was written—the period of Hellenistic rule in the Land of Israel, following the conquests of Alexander the Great.

The appearance of archangels by name and their stated purpose is a Second Temple period innovation. We will conclude with an interesting hypothesis that appears in ancient Jewish rabbinic literature: “Rabbi Hanina said: The names of the months came from Babylon. Rish Lakish said: Even the names of the angels Michael, Raphael and Gabriel” (Bereshit Rabba, Parsha 49: 9, Theodore Albeck edition, p. 485).