With Israelis ready to flock to Dubai and Abu Dhabi, Katie Wachsberger spoke to the National Library about the cutting edge of culture in the UAE 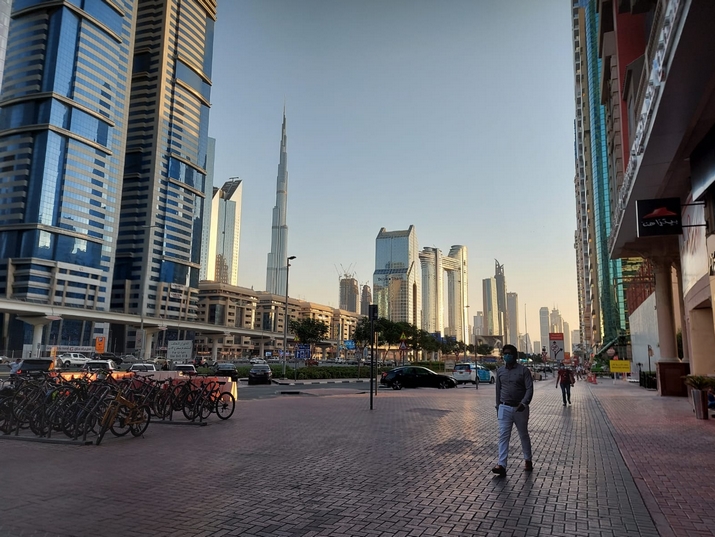 The streets of Dubai, with the Burj Khalifa skyscraper, the world's tallest building, in the background; photo by Katie Wachsberger

Four hard-core rockers are wailing away in a dimly lit garage. The long-haired, headbanging guitarist and bassist are playing faster than seems humanly possible, and the lead singer’s gravely growl sounds like the voice of Satan himself. For those who love it, the song, “Demean,” by the band Nervecell, is four minutes of Death Metal perfection.

It may be a shock for some to learn that Nervecell’s musicians do not hail from London, Stockholm, or San Francisco. Instead, the well-established group is the leading representative of a thriving Death Metal scene in the United Arab Emirates, one of Israel’s newest partners in peace in the Arab world.

If you ask Katie Wachsberger, though, there is no reason for surprise; Israelis should set aside their prior assumptions about what culture is and isn’t in the UAE. In a recent lecture that was part of the National Library’s “Reading Room” series of online events, Wachsberger uncovered the vibrant cultural scene in the Gulf nation. A research associate at the Forum for Regional Thinking and the co-founder of the Unas Cultural Foundation, Wachsberger spoke to listeners from Dubai, where she spent over a month meeting with Emirati partners in the wake of the September 15 peace accord between Israel and the UAE.

Check out Katie Wachsberger’s lecture on the underground culture scene in the UAE:

The United Arab Emirates is a young country. Seven kingdoms, which had formerly been under British colonial rule, and located on the south-western reaches of the Persian Gulf, jointly founded the independent state in 1971. However, Emirati culture, as Wachsberger explained, is diverse and deep, with roots stretching back thousands of years to pre-Islamic times. As the country has grown into a cosmopolitan center for finance, trade, and business over recent decades, the cultural scene has expanded in stride. Major cultural institutions have opened branches there, including the Louvre Abu Dhabi in 2017, the American University in Dubai in 1995, and a planned Guggenheim Museum in Abu Dhabi.

What’s more, the Emirates is more and more a center for new creativity in visual arts, film, performance, and music–the head-thrashing Nervecell is just one example–rather than being only a passive recipient of western cultural exports. However, culture is complicated, and Emirates-based artists face their own unique challenges.

While the population of the UAE numbers almost ten million people, only some twelve percent are actually citizens. The rest are foreign workers and expatriates from all over the world, including South and Southeast Asia, Europe, Africa, and the rest of the Middle East. This diversity makes the country a cultural melting pot where different traditions can mix and recombine. Wachsberger cited a number of examples, including the CHI-KA women’s fashion line, created by a designer of mixed Emirati and Japanese heritage, that sells kimonos, abayas, and other clothes inspired by both cultures.

Such innovation exists alongside traditional Emirati culture, which is largely similar to that of other Gulf Arab countries. While no longer the true popular culture of the UAE, traditional dress, dances, and music are supported by the government as part of its larger goal of preserving a certain national narrative.

Although grassroots and innovative cultural projects are receiving more attention and support, they also still face a difficult path to success. Non-citizen residents, even those who have lived in the UAE for decades or generations, must have a work visa to remain in the country. For that reason, cultural entrepreneurs are obligated to quickly turn their projects into for-profit ventures, to find external support in government or academia, or to keep their day jobs and spread their work through social media rather than more standard avenues.

Nevertheless, Wachsberger underlined that now is a moment of fascinating cultural transition in the UAE. New, critical, and innovative cultural projects are growing organically throughout the country and attracting attention at home and abroad. Artists are more optimistic about the future of Emirati culture than ever before.

The new connections between the UAE and Israel, she added, can help accelerate this momentum. Israel has a rich and robust cultural scene, with grassroots movements, activity in all the arts, and a long and developed tradition of cultural criticism. While Israelis are already imagining what peace with the UAE might mean for Israeli society, economics, and politics, the cultural effects in the Emirates could be just as deep and profound.