Jewish History From Bamiyan to Brooklyn

The journey of Jewish languages was the topic of a fascinating lecture held at the Marlene Meyerson JCC Manhattan on June 11th. 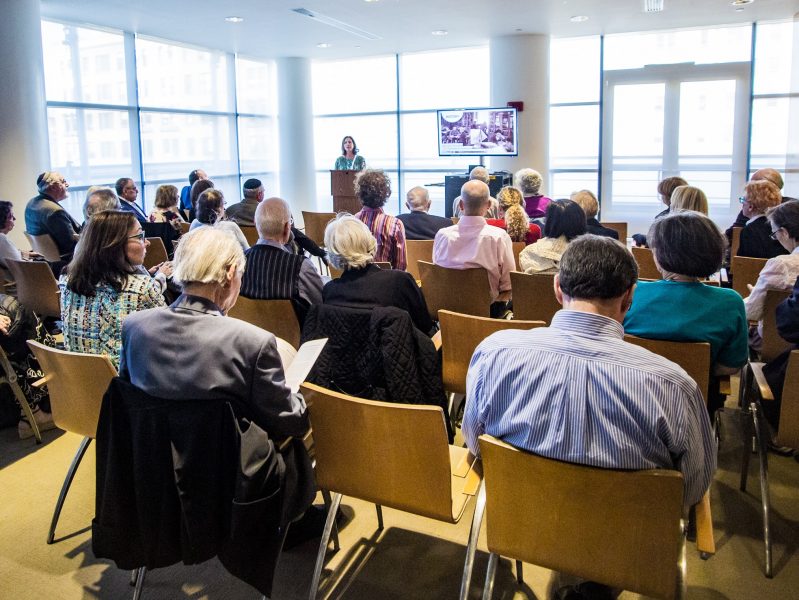 Naomi Schacter speaking at the Marlene Meyerson JCC Manhattan
In June of 2018, Dr. Yoel Finkleman, Curator of the Haim and Hanna Salomon Judaica Collection at the National Library of Israel, presented fascinating insights about the twists and turns of the Jewish language as it evolved with the wanderings of the Jewish people, in honor of the opening of a new National Library of Israel exhibit at the Marlene Meyerson JCC in Manhattan, New York.

Throughout history, the Jewish community has been carried by, among other things, distinctive Jewish languages, explained Dr, Finkelman. Over the centuries, Jews have created new languages, combining Hebrew with the dialects of their home countries and developing distinctive localized languages, such as Yiddish and Ladino. In other cases, their language was largely comprised of the local vernacular written in Hebrew characters, such as Judeo-Arabic and Judeo-Persian.

Even when Jews were fully comfortable in the local vernacular, they often had a unique vocabulary that would pepper their speech with uniquely Jewish terms and expressions, such as the Yeshivish dialect of today’s Orthodox young men.

The National Library of Israel recently acquired 250 manuscripts from Bamiyan in Northern Afghanistan, from a collection known as the Afghan Genizah. These manuscripts are written in Arabic, Aramaic, Judeo-Arabic, Judeo-Persian, exhibiting the diversity of Jewish language. From medieval Afghani receipt books to contemporary comic books, unique Jewish languages are a central building block of Jewish culture.

The exhibition, “Curating the Past, Creating the Future,” developed in partnership with the JCC Manhattan, presents highlights from the Library’s vast collections, which contain manuscripts, books, posters, maps, music, photographs and more. The Library treasures reflect and reveal Jewish life across continents and centuries, and highlight the diverse history and cultures of Israel and its region.

In honor of Israel’s 70th year of independence, the exhibit also includes wonderful examples of the official Independence Day posters produced in celebration throughout the decades.

The event was attended by over 70 people. Ruth and Sandy Gottesman, leading partners in the Library renewal, participated in the event, along with other colleagues, friends and donors from the area.

Also in attendance was Dr. Jacqueline Heller, who sponsored the exhibit in memory of her parents, Joseph Heller and Fanya Gottesfeld Heller, whose commitment to Jewish life, culture, and history extends from New York to Israel.