The Altalena Affair: When Israel was on the Brink of Civil War

The sinking of the Altalena was perhaps one of the most incredible and divisive affairs in the history of the State of Israel. What really happened during those tense days? 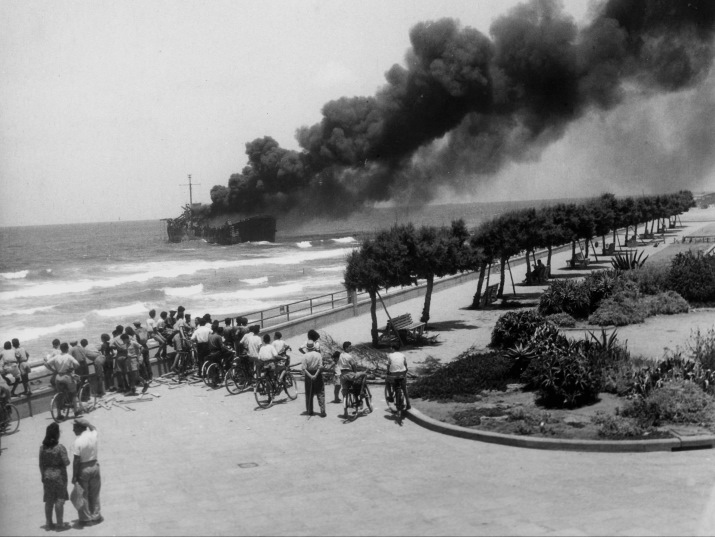 The Altalena burning after being shelled, from the GPO Archive

The Altalena Affair is perhaps one of the most incredible and heated affairs in the history of the Jewish state. Barely two months after its establishment, the young State of Israel found itself engaged in a cruel war of survival against the Arab armies, when an internal battle erupted inside the fledgling country and threatened to drag its people into civil war.

What really happened during those tense days?

Summer 1947: The USS LST 138, a U.S. Navy landing ship is purchased by a branch of the Irgun (a right wing Zionist paramilitary organization) in North America. The ship’s name is changed to Altalena. The name, which means seesaw in Italian, wass the pen-name used by Ze’ev Jabotinsky, the founder of Revisionist Zionist ideology..

Winter 1947: The ship is packed with close to one thousand immigrants and combatants (some of them Holocaust survivors), crew members, and tons of military equipment.

11 June 1948: After a nearly month-long delay, the Altalena sets sail from France to the shores of Israel. This delay seals its fate, since the ship sails after the signing of an agreement earlier in the month to incorporate the Irgun, which had been a militant faction active in the underground struggle against the British Mandate authorities, into the newly founded Israel Defense Forces.

The United Nations Security Council, which, throughout the entire period of the war had been engaged in the question of Palestine, stepped up its efforts to bring the fighting to an end, and instead of releasing a non-binding declaration, issued an order demanding that both sides agree to retreat, and that sanctions would be applied to the side that refused.

On June 10th, 1948 both sides agreed to the terms of the ceasefire devised by the UN-appointed mediator Count Folke Bernadotte. The ceasefire, which took effect the next day, lasted four weeks.

15 June 1948: The Irgun commander, Menachem Begin, meets with the representatives of the Israeli government to inform them that the ship had sailed from the port in Paris against his orders. Begin is insistent that a fifth of the arms on board the ship be transferred to independent Irgun units in Jerusalem and the rest to the IDF (with preference to Irgun units integrated into the IDF). David Ben-Gurion approves the transfer of some of the arms to Irgun units in the capitol, but commands the rest of the weapons to be transferred immediately and without any preconditions to the IDF. Differences of opinion and suspicion are rife on both sides.

20 June 1948: The Altalena docks at Kfar Vitkin and the crew starts to unload the cargo without permission, as goverment cabinet ministers hold heated discussions over the unfolding events. The government’s decision is: “To give the (IDF) headquarters the authority to launch a counter-attack, provided they coordinate enough manpower by the appointed time. The commander must try to control the situation without use of force, but if his command is not obeyed, then with the use of force.”

21 June 1948: The Alexandroni brigade surrounds Kfar Vitkin. The commanding officer issues an ultimatum to Menachem Begin – to hand over the ship with all of its contents to the IDF. They are given ten minutes to respond.

With no response to the ultimatum, there is an exchange of fire in which six Irgun fighters and two IDF soldiers are killed. Menachem Begin boards the Altalena and it retreats, sailing south to the shores of Tel Aviv. 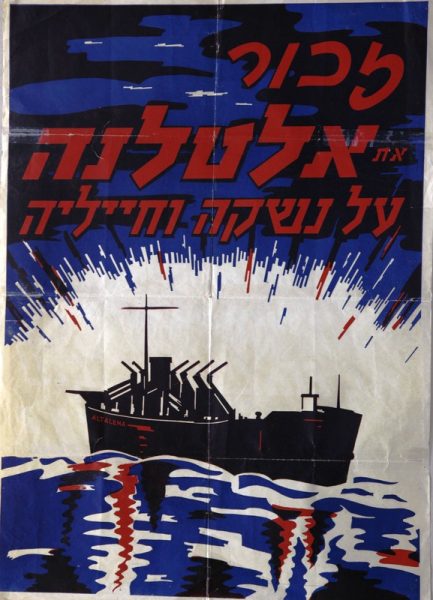 “Remember Altalena, Her Arms and Her Soldiers” – a poster from The Jabotinsky Institute Collection

22 June 1948: Ground forces under the command of Yigael Yadin are sent to overpower the Altalena.  Heavy fire is exchanged between Irgun forces on the ship and IDF forces on the shore. Fearing the outbreak of a civil war Begin calls on Irgun fighters not to return fire, raising a white flag aboard the ship.

An artillery gunner who receives the order to open fire on the ship refuses to do so claiming that he would rather be tried and even executed, than fire upon fellow Jews. A second gunner hesitates to fire but eventually is convinced and fires on the ship. During the exchange another ten Irgun fighters and one IDF soldier are killed.

With a fire spreading on deck, Monroe Fein, the captain of the Altalena, orders all aboard to abandon ship. Menachem Begin only agrees to leave after the last of the wounded is evacuated.   If you liked this article, try these: When the Child Prisoners of Cyprus Dreamt of Israel A Diary from Jerusalem Under Siege The Mother Who Stayed Behind to Defend Her Home During Israel’s War of Independence