The Red that Created a Revolution

In 1868, a German laboratory synthesized a color that changed the course of the Industrial Revolution. 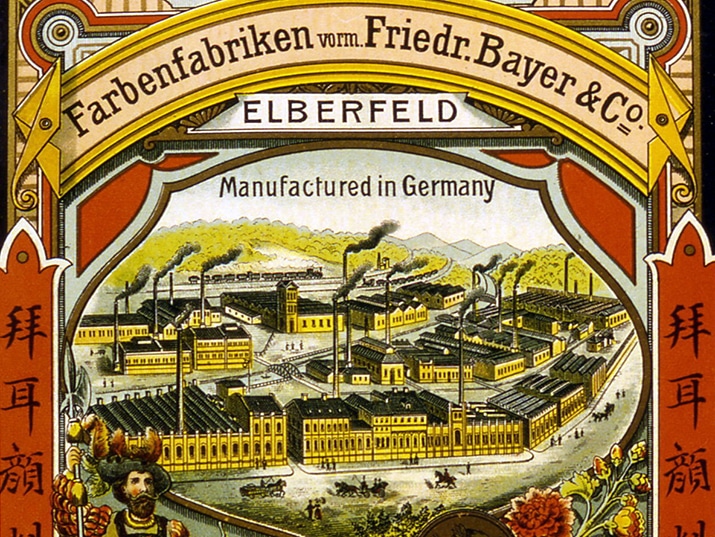 Friedrich Bayer & Co. Dye Label. 1865. From the Edelstein Collection in the National Library of Israel

The year 2018 marks the 150th anniversary of the first synthesis in a laboratory of a complex, naturally occurring organic chemical product. This was the important red dye known as alizarin, obtained from the root of the madder plant. The madder red, second in importance only to indigo blue, had been used as a versatile dye for hundreds of years and is best known for its application in production of the famous Turkey red cloth. By clever application of the agents used to fix the dye to cloth, various shades and hues could be achieved from the same dye.

The chemical synthesis of alizarin was achieved in early 1868 by Carl Graebe and Carl Liebermann (a relative of the artist Max Liebermann), who were research assistants of the chemist Adolf Baeyer. The significance of this achievement lay in the tremendous industrial importance of the natural dye, which was often applied using high-speed printing machines that colored millions of yards of cloth. As an outcome of the synthesis, alizarin was manufactured on vast scales in Britain and Germany, which in a flash, almost wiped out much of the cultivation and trade in the natural dye. This success was the main stimulus for the emergence of the synthetic dye industry, which transformed coal tar waste into alizarin and a myriad of other colored textile dyes. The early dyes were based on the chemical known as aniline, which gave its name to the industry.

Theodore Herzl was so impressed that, in 1896, he was inspired to write a short story, ‘The Aniline Inn’, in which, just like the transformation, or processing, of waste tar into ‘beautiful radiant colors’, the oppressed Jewish peoples could turn their despair into highly colorful achievement. This ‘refuse of human society’ was then waiting to be processed and given purpose in the Jewish State.

The synthesis of alizarin stimulated scientific studies into the chemical constitutions and molecular structures of both natural products such as alizarin and indigo, and others without analogous colors in nature. In 1868, only a partial structure could be drawn for alizarin. Six years later, the modern structure of alizarin was published by Adolf Baeyer and the industrial chemist Heinrich Caro at BASF, a chemical company based in Ludwigshafen.

This advance drew on, and in many ways reinforced, the acceptance of Kekulé’s famous six membered benzene ring of 1865. It also led to scientific studies into all novel colorants, such that within a few years it was possible to create color by design. This was a high point of the second industrial revolution, based on chemical industry and electricity. Synthetic dyes represented the very first high-tech science-based industry.

By the close of the 19th century, Germany practically dominated the industry of making synthetic dyes. This success relied on the opening of dedicated research laboratories, and collaborations between industry and technical institutes. In 1897, two German firms, BASF and Hoechst, commenced the manufacture of synthetic indigo, which within a few years displaced the blue natural product imported into Europe from India.

This revolution in the production of textile dyes, which began with synthetic alizarin, and its implications for global industries and economies, as well as for progress in science and technology, is recorded in the magnificent collection of books, pamphlets, recipes and archival documents gathered together by Sidney M. Edelstein. Today these documents are held with the Sidney M. Edelstein Library for the History and Philosophy of Science, Technology and Medicine at the National Library of Israel.