As a young grad student 30 years ago, Prof. Brian Horowitz was an active witness to history 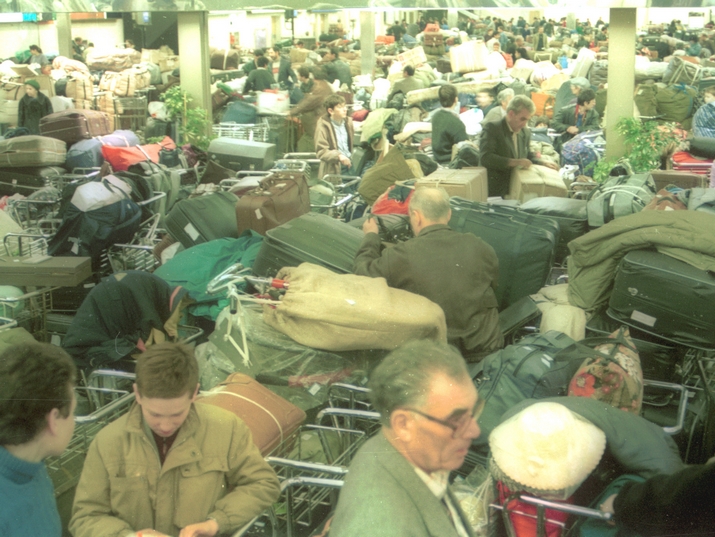 Thirty years ago, a huge wave of immigration transformed Israel.

Over a million Russians arrived, turning their adopted country into a more prosperous, dynamic, and culturally rich (in a European sense) version of itself. I was there too, a grad student in Jerusalem, observing the changes as they happened. What I recall now, on the thirtieth anniversary of the “Russian flood,” is a little less triumphant than what journalists in Israel and the United States are now recalling.

My short memoir tells two intersecting stories. One recounts the general context of which I was an observer. The other is the story of Russian Studies in Israel that I, an American, experienced first-hand with the new immigrants.

It was a peculiar time in Israel, the end of the First Intifada. Peculiar, too, was the situation in Jerusalem, where my neighbors were all new immigrants from the former Soviet Union. The place was as motley as a Central Asian bazaar: some came from Moscow and with pretentions, some from Rostov, others from Uzbekistan. Some drank vodka every night with friends, bought new clothing, had style. They burned through their “Aliyah money” quickly.

Others were more fastidious. There was a real poet, too, who bought a washing machine and put it in his suite. He and his wife argued a lot. I remember one of her complaints: how an Israeli had propositioned her, and she, offended, told him that she was married. “We won’t tell your husband,” he replied.

Because I often spoke Russian, I was scoffed at by Moroccans who told me to go back to Russia. Little did they know, I grew up on Long Island.

Thousands of Jews were arriving daily. In Hebrew they were known as “olim hadashim”, while in Russian, they called themselves “repatriaty” (those repatriating). Although the Russian term underscored the Zionist vision, to some Israelis, the immigrants were people who could have come earlier, but didn’t, preferring to let others create the state. Now they had come because no one else would take them.

With few exceptions, the “Russians” knew little about Zionism. It wasn’t their fault; they had come of age in a party dictatorship in which emphasizing one’s Jewishness could get you in trouble. In the Soviet Union, getting ahead was best achieved by repressing national and religious difference and quietly working for oneself in tandem with service to the state.

Life in Israel was no piece of cake.

Just as you’d expect, the new immigrants struggled: poverty, displacement, and confusion accompanied their journey. Movies such as “Yana’s Friends” romanticize the experience, but it was painful to see the humbling of talented people. Street musicians looked more like pitiful beggars than concert masters brought down by circumstance.

Prostitutes appeared. And let’s not forget discrimination in employment and education. Russians were often treated coarsely, put through the ringer. Meanwhile, sexism was also present; women had a difficult time building their careers and complained about ubiquitous sexual harassment.

Money—and anxiety about money anxiety—was on everyone’s minds, as they shared cheap deals on apartments, clothing, and groceries, as well as practical tips about finding work. Along with anxiety, one sensed disappointment.

It feels churlish to say this, but many recent Russian immigrants barely considered themselves Jewish, and wanted to be elsewhere. They were lost in their new country, unfamiliar with Hebraic culture—the Hebrew language and its rich heritage from biblical times to the present. To them, culture meant Pushkin, Dostoevsky, Tolstoy, and Chekhov. Many “Russians” considered Israel a cultural desert; how could they survive so far from Moscow, Paris, and New York?

The most painful part of their experience was the Jewish question. For some Russian émigrés, the question was existential: how will I, an atheist, fit into Israel? Having come from a culture that mocked religion, the “opium of the people,” they viewed Judaism with some embarrassment. For other Russians, the problem was practical: 30% of them weren’t considered Jewish by halachic law; could they have a place in the state? Furthermore, many immigrant men were uncircumcized, and had to endure painful surgery as adults. If that wasn’t difficult enough, one still had to wait on the rabbinate’s approval.

And in addition to everything else, there were the Palestinians. Terror created a common cause and forged an Israeli identity for the newcomers. But fear was compounded because the immigrants largely rode buses; they couldn’t afford private cars.

While the “Russians” are now sometimes criticized for their rightist and anti-Arab politics, it’s difficult to discount the impact of those early years on the “Russian” experience in Israel.

My personal story focuses on the Hebrew University.

The influx of Russians brought a wave of scholars and would-be scholars. These were human encyclopedias – especially on Russian history and culture – yet with little knowledge of Judaism and Jewish history. The Hebrew University had a large army of professors in Russian Studies, and, although there were never many students, during the Cold War its function had been to research issues on Soviet-Jewish persecution as well as Jewish history in Russia: the Bund and Jewish radicalism, and of course, the history of Zionism in Eastern Europe. The professors were like Yekes, yet nonetheless warmly greeted the Ostjuden; they often drank coffee with us at Beit Belgia or another campus café.

The academic successes that emerged from this injection of new blood surpassed expectations. It was an auspicious moment: rare archives in Russia suddenly opened, and thanks to the internet, collaboration across continents and disciplines started in earnest. Within a few years, a dozen fine dissertations had been written.

What was life really like for us Russianists? This was not the stuff of musty rooms and dusty books. Russian Studies in Israel was punching out of real life. The city of Jerusalem fueled our feverish efforts with its hastily erected Russian bookstores and cheap Russian restaurants. It was easy to find a bowl of borsch, 50 grams of vodka, black bread, and kapusta (sauerkraut) for merely a few shekels.

Inspiration came from people, from the energy of the moment.

I have to admit, however, that studying liberal arts was risky then (as it is now). We tried to ignore how difficult it would be to find jobs, but our parents, husbands, and wives never ceased to worry about us and themselves. We accepted our fate, while others made different choices and started to make real money.  The next generation would seek well-paying jobs in business and computers, but we embodied a different set of values; books, ideas, and esoteric knowledge gave us a powerful feeling of self.

At the time, there was still enormous respect for learning, as quaint as that sounds today.

Then a few years passed. The bookstores disappeared, as did the hundreds of Russian food joints. Russian was heard less and less often. The number of professors in Russian Studies at the Hebrew University dwindled. With the Cold War over, Israel shed her Russia experts. Within a decade, the things we cherished had all but vanished.

Although some commentators are claiming that the “Russians” are the first immigrant group in Israel to retain their original culture, I disagree. In fact, they have assimilated as did immigrants before them. Their children speak Hebrew, fulfill army service, vote, and work. Most important of all, they marry other Israelis, creating families in which Hebraic culture overwhelms the Russian.

About me? I am now old and crotchety, as are my colleagues, the generation that studied at the Hebrew University and sat from morning to evening at the National Library. Some have already retired. The great luminaries have passed to the other world (may their memories be a blessing). There will soon be a new national library built next to the Knesset in Givat Ram and it will have a stop on the light rail.

Although that sounds trivial, it is part of the success story that is today’s Israel – superpower of the Middle East – that in large part came about thanks to the ‘Russians’. However, those who lived through that earlier time have memories of a genuine (uncomfortable, painful, vibrant, dynamic, and full) experience that changed our lives forever and, despite everything, for the better.