“At the Source”: Sharing knowledge to protect Jewish heritage in Europe

Archivists and librarians from the Balkans convened for a special training course at the NLI. 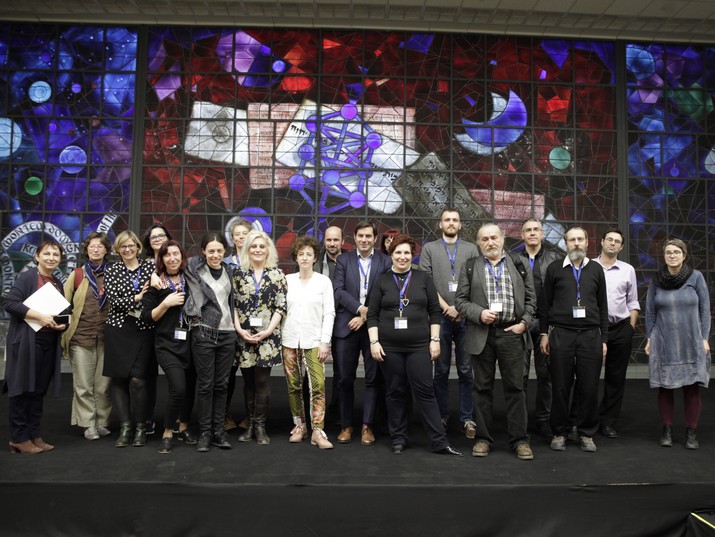 At the Source is a training course for European librarians and archivists who work with Jewish collections.  In addition to learning important professional skills, At the Source participants form strategic connections with National Library colleagues and with each other that will support them through their careers as the custodians of significant, and sometimes endangered, Jewish archives and libraries throughout Europe.

This regional At the Source course was especially developed by NLI and the Central Archives for the History of the Jewish People to address the needs of representatives from 16 Balkan institutions – Jewish museums and community and state archives – from Bosnia, Bulgaria, Croatia, Greece, Macedonia, Serbia, and Slovenia.  The course gave participants hands-on experience working with materials that reflect the context of their own collections.  The first stage of the training was held in Belgrade in October 2017, and was followed by a week at the NLI in Jerusalem in January 2018.

The course, delivered by staff across all NLI departments, was very well received and has helped position the NLI as a beacon of excellence and knowledge for archivists and librarians working with Jewish heritage in Europe. Below is a taste of some of the feedback from participants:

It was wonderful to meet people with a shared passion for Jewish culture – this is the beginning of many connections.

I was very grateful to hear from people doing the same work as I do – I feel less alone. The individual sessions were very productive.

Exceptional lectures and mentoring – you have made my job so much easier. I now know who to talk to and go to for help.

My mentor has already sent me materials and step-by-step guidance.

And we wish to spotlight one particular participant: Dr. Janez Premk, Director of the Research and Documentation Center for the Jewish Archive of Slovenia.

The Jewish population of modern-day Slovenia is tiny, with around 150 registered community members nationwide, in a country of just over 2 million citizens.  And Janez Premk has taken it upon himself to almost single-handedly document the long history of the Jews in his country.

Janez’s recent participation in the National Library of Israel’s At the Source training program for archivists and librarians working with Jewish heritage in Europe was “a real eye-opener.”  The program gave Janez an overview of Jewish collections and projects that exist in the Balkan region; a distinct opportunity to meet and have direct access to people who work in the field; and a connection to the National Library of Israel and various Library experts. Janez loved being in Israel in an academic setting and raves about the At the Source program and the exposure to the National Library.

“For me there was not a single moment of wasted time in this program. I cannot imagine any other institution that would be as invested in sharing knowledge [as the National Library of Israel was]…I love the approach here.  Central Europe is more ‘old school,’ not a place to ask questions.  Here the focus is renewal, launching new initiatives. Everyone here is passionate and knowledgeable. My experience was fabulous,” Janez said after the training.

After earning a BA in Art History from the University of Ljubljana, in the capital city, Janez began working on his graduate degree, focusing on the medieval Jewish community and synagogue in Maribor, Slovenia’s second largest city. During this process, Janez was awarded an Israeli governmental scholarship to study for a semester at Hebrew University’s Rothberg International School. These studies were the springboard for Janez’s launch of the Research and Documentation Center – Jewish Archives of Slovenia (JAS).

Janez invested time in photocopying many documents from the Eventov Archives (the records of the Association of Immigrants from the former Yugoslavia in Israel), which only more recently began to formally catalogue their documents in an electronic database and digitize a portion of their archival materials.

At the Source is a flagship project within Gesher L’Europa, an initiative funded by the Rothschild Foundation Hanadiv Europe, providing opportunities for exchange and enrichment between the National Library of Israel and European scholars, library and museum professionals, and Jewish educators.