On Pilgrimage to Franz Kafka

Take a glimpse at the notes left around the author's grave that were collected by the late journalist and translator, Ruth Bondy, who's archive is housed in the National Library of Israel. 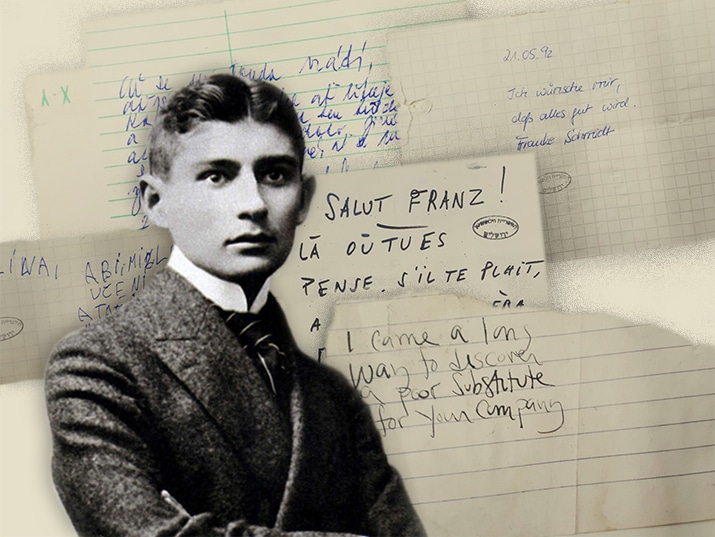 Franz Kafka passed away on June 3, 1924, with the knowledge that his writings, which he considered subpar and mediocre, would never see the light of day. So low was his opinion of his own prose that he asked of his best friend, Max Brod, to make sure his books and stories, both finished and unfinished, would be burned and  would thereby never be published.

Max Brod defied his friend’s dying wish, knowing just how extraordinary Kafka’s writing was. What Brod did not realize was that his friend, who died far too young at the age of 40 from tuberculosis in Austria, would become a secular saint of sorts.

In 1992, Ruth Bondy, the Czech-born journalist, translator, and author whose archive is at the National Library of Israel, returned to visited Prague for a tour of the Jewish cemetery. This tour was conducted after the fall of the Soviet Union and following the renewal of diplomatic relations between Israel and the Czech Republic.

Bondy, who came on Aliyah in 1949 after surviving three years in concentration camps during the Second World War, sought to revive the lost Czechian Jewish culture in her research and writing. She worked tirelessly to translate Czech literature into Hebrew and was a liaison with important Czech writers.

It was during that tour of the Jewish cemetery that Bondy approached Kafka’s grave and was surprised to see notes upon notes strewn about the headstone. When the cemetery caretaker heard of the visitor from Israel, he told her the story behind the small slips of paper and gave her a few to keep as a memento.

In an article written following her cemetery visit published in 1994, Ruth Bondy explained that she had never heard of Kafka during her childhood in Prague, even though she was born into the same Jewish community a year before his death. In fact, she had only heard of him after coming to Israel, as it was only in the years following the Second World War that his name became so well-known.

During her cemetery visit nearly 70 years after his death, Bondy discovered that Kafka was not merely an angst–ridden author, but also the patron of the broken-hearted and ill-fated.

The notes at the grave-site were written in many languages – English, Romanian, Italian, Czech and French- showing just how broad this phenomenon was. The notes placed upon the grave of the secular saint were a part of a ritual pilgrimage and served as a site of hope for those who found themselves in his books and shared a dour kinship and fate.

The cemetery caretaker explained to Bondy that, every now and then, he and his team collected the older notes but new ones quickly replaced the old.

Bondy wrote in that same 1994 article: “I have nothing with which to compare this Kafka pilgrimage other than to the Jesus pilgrimage who was also a Jew. It is more than that Kfaka’s writing affect the masses – he provides them with a crutch or a refuge. It is no coincidence that the cemetery workers collect the notes from his grave every few week, like the grave of the Maharal [of Prague], and burn them.”

A few of the notes kept in the Ruth Bondy Archive in the National Library of Israel:

Hello Franz! Wherever you are, please think about my son, Nicolas Errera. May he be happier than we were. May your genius support his. Thank you with all my soul. Signed, 18-5-1932

I came a long way to discover a poor substitute for your company.

I hope your trial – which is everyone’s trial – had a happy ending.

One thing that could not be found in the notes were queries asking for advice in dealing with Kafkaesque bureaucracy. Clearly, the Kafka pilgrims and devotees know that is beyond even his abilities.

This article was written with the help of Dr. Hagit Zimroni, the Archives Department of the National Library of Israel.