“I did not commit treason, I committed suicide” – Uri Ilan’s Secret Notes

Home > History of Israel > “I did not commit treason, I committed suicide” – Uri Ilan’s Secret Notes
Land of Israel 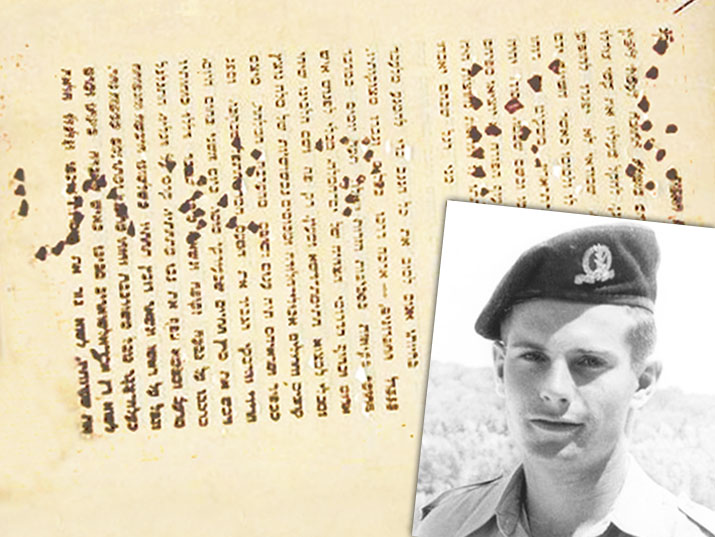 Using an improvised, hand-made implement, Sergeant Uri Ilan recorded his story on pages torn from a book. His account began with his capture by Syrian forces and ended with his own death. The notes, which Ilan hid in his shoes, were discovered upon the return of his body from captivity, the day after he hung himself. As the notes explained, he took his life for fear that he would break under enemy torture and reveal secrets that could damage national security.

The night of December 8, 1954, Uri Ilan and four members of his squad set out on foot from Kibbutz Dan in order to replace a battery in a listening device in the northern Golan Heights as part of “Operation Cricket.” At the time, the Golan Heights were under Syrian control – this mission was taking place behind enemy lines. Not long after they set out- something went wrong and the the five were discovered by the Syrian army near Kibbutz Kfar Szold. They were captured and first taken to Quneitra. From there they were transferred to the infamous al-Mezzeh prison in Damascus, where the soldiers were placed in individual cells.

Uri Ilan survived fifty-three days of brutal torture in captivity. Isolated in his dungeon cell, and unaware of the efforts to free the squad members, he believed that the others had been executed and that he was next. On January 13, 1955, he was found hanging in his cell in the Damascus prison. Frightened by the soldier’s suicide, the Syrians called in the UN representative. After the representative confirmed the sham report that described no signs of violence on Ilan’s body, his remains were transferred to Israel the same day. Chief of Staff Moshe Dayan was present when the body was returned to Israel and he was among the first to read the messages the deceased soldier had hidden on his body. The first note contained Hebrew words pierced into the paper: “Look through my clothes for my will Uri.”

Uri Ilan, who did not have access to writing utensils, had used an improvised wooden toothpick to poke his messages into the pages of the Hebrew book Nikmat Ha’Avot (“Vengeance of the Fathers”) by Yitzhaq Shami. Seven of the ten notes called for revenge on his captors. At Ilan’s funeral, Dayan quoted Ilan’s words from one of the notes: “I did not commit treason, I committed suicide.” These words were etched into collective Israeli memory, becoming symbols of personal sacrifice.

Dayan eulogized Sergeant Ilan at his funeral: “Uri Ilan carried the mission of the security of his people on his young body and with the power of his own determined will, until he reached the limit of his ability and his will prevailed over his body. Uri reached the end of his journey. A note attached to his cold corpse returned to the homeland bears his final cry: ‘I did not commit treason!’ The army flag bows before you – Hebrew soldier, Uri Ilan.”

When the Chief of Staff offered the notes to Uri’s mother, Fayge, she refused and replied memorably, “He wrote them for the IDF, he did not write them for me.” The Uri Ilan Archive is preserved at Bar-Ilan University. The notes found on his body are kept in the IDF & Defense Establishment Archives.

The notes displayed in this article appear courtesy of the IDF & Defense Establishment Archives.