When the Irgun Decided to Be Judge, Jury and Executioner

Home > History of Israel > When the Irgun Decided to Be Judge, Jury and Executioner
Land of Israel

Kadia Mizrahi and Leon Mashiach were executed after being sentenced to death by drumhead court martials organized by the Irgun | Their death sentences on the alleged charge of treason were delivered by a self-sanctioned, non-transparent body, lacking any oversight | Delving into the details of the cases reveals a violent and controversial procedure in which military organizations permitted themselves to execute people without conclusive evidence | A look back at a darker side of the pre-state era 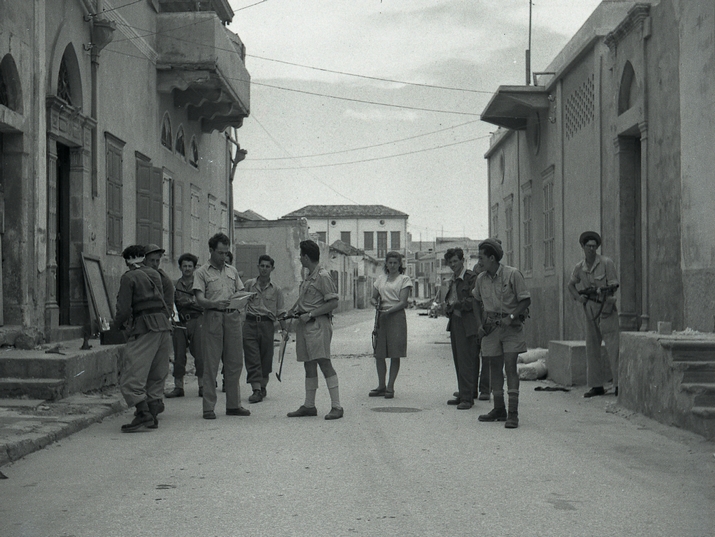 On a March morning in 1947, residents of Mandatory Palestine – the Land of Israel – awoke to find a new announcement from an “Irgun Tribunal” heralding a double execution carried out by its members. These were frenzied days when the Jewish settlement was battling the British Mandate government and its attempts to prevent Jewish immigration. The Irgun and Lehi underground organizations saw the British as their greatest enemy, and anyone suspected of collaboration, even if that person was a Jew, became a potential enemy in their eyes.

The statement released that morning announced the execution of two Jews — Kadia Mizrahi of Rehovot and Leon Mashiach of Petah Tikva — on the charge of informing to the British. These were two more names in a long list, but a thorough examination of the announcement can teach us quite a bit about the phenomenon as a whole.

Executions within the Jewish community in Mandatory Palestine were not a new occurrence. The first political assassination was that of Jacob Israël de Haan in 1924, and dozens more Jews were sentenced to death by various organizations on charges of treason, passing on information and collaboration with the Arabs or the British, before the State of Israel’s establishment in May of 1948.

The phenomenon is sometimes attributed only to the Lehi and Irgun, with the thinking being that their hardline positions led them to commit such violent acts, but in fact, the Haganah also assassinated Jews for similar reasons on several occasions. The difference was that the Haganah carried out its executions “quietly,” whereas the Irgun and Lehi chose to publicly announce theirs. Throughout most of the 1940s, the majority of the executions of Jews on these and other charges were indeed carried out by the Irgun and Lehi, while the Haganah during this period attempted to maintain a policy of cooperation with the British, as World War II and the Holocaust were both underway.

The announcement distributed in March 1947 begins with a description of Kadia Mizrahi’s guilt: “A whore who is corrupt to the core, a traitor to her people, a servant of the enemy, a professional informant who betrayed Jewish citizens, even her own son, to the British secret police.” It goes on to say how conclusive evidence was presented to the court (whose members remain unknown to this day) and that after Mizrahi had been warned about her behavior on previous occasions, she was executed.

Kadia was born in Israel to a Yemenite immigrant family. Her fate was sealed early on in life when she haphazardly married a youth her family did not approve of. The marriage was annulled, but from that day forward, she was an outcast. She was later married to Avraham Shriqi (whose name was Hebraized to Mizrahi) and became a homemaker, while also earning some money working in the homes of wealthier families in the area. The couple had five children. In 1945, Kadia did the unthinkable at the time by asking the Rabbinical Court for a divorce from her husband. Her request was eventually granted, along with a plot of land in the Marmurek area (Rehovot).

Following her divorce, Kadia lived alone after her ex-husband gained custody of the children in order to avoid paying child support. She adopted a lifestyle that was frowned upon by just about everyone aside from herself. She enjoyed dressing in nice clothes, dancing, sitting in cafes and smoking cigarettes. Around this time, the Jewish establishment in Mandatory Palestine began recruiting women to entertain British soldiers and show them a good time, as a way to win them over to the Zionist cause. Kadia signed up.

It should be noted that the women were not recruited to have sexual relations with the soldiers. Nevertheless, many among the Jewish community were skeptical of the tactic. The national institutions wanted the girls to dance with the foreign soldiers, host them and advocate for Jewish interests in the Land of Israel, but others feared assimilation. The “Committee to Protect the Honor of Jewish Daughters” was established to combat this “plague”. At one point, Kadia was recruited to work for the local branch of the British police. She started in maintenance and cleaning, advancing to the position of Arabic-English interpreter, before finally becoming a police officer/warden working with local women.

She and other women were occasionally followed by Irgun agents who suspected them of passing on information to the British, but Kadia was dismissive of these tactics. According to various sources, one night, after an Irgun attack on the Qastina airbase, the fighters returning from the operation stopped by her house to rest and change clothes, but Kadia wouldn’t let them in. Her refusal was to have dire consequences.

As a woman at that time, Kadia was already at a disadvantage. Her extroverted behavior, association with the British, the fact that she was divorced, lived alone and made no excuses for whom she associated with, all made her an easy target. She suffered various harassments, including masked men who tried to break into her home as well as malicious rumors that were spread about her. Finally, when the British imposed martial law in March 1947, she was accused of informing and passing on the names of Hebrew fighters.

The language of the announcement detailing her execution clearly displays the opinions of the Irgun about her chosen lifestyle, indicating that this was among their considerations when making the final decision on her fate. After receiving several threats, Kadia went to the British police but they refused to help her. Finally, one night, armed and masked members of the Irgun broke into her home and shot her eight times in her bed. She was 42 years old when she died. Her children engraved on her tombstone: “Murdered as a result of unjustified hatred and false accusations”.

The case of Leon Mashiach, who was executed around the same time, was slightly different, though his fate was similar. Originally from Bulgaria, the 29 year-old Mashiach was a newly discharged soldier and recently divorced. His accusers used the same language as they did for Kadia: “a traitor to his people and an informer.”

The Irgun tribunal published that Leon Mashiach confessed to his deeds and even signed a statement proving his guilt: “I, the undersigned, hereby declare of my own free will that I had contact with the detective Sergeant MacLachlan of Petah Tikva. I gave him two training locations, one in the synagogue near the flour mill […] and the other in a kindergarten in Mahane Yehuda […] I devised a plan to capture the weapons trainees […].” Below it, he signed his name, the date, his year of birth and other details. His statement was not published along with the poster and was only found many years later in various archives.

After admitting his guilt, Mashiach asked to commit suicide as an “honorable solution” and to protect his son’s reputation. His request was denied, but according to the tribunal’s declaration, the Irgun assured him that “the disgrace of the traitorous father will not taint the son, who will grow up to be a loyal son to his country and homeland.” According to a news item published after the murder, his body was found blindfolded, after “rumor spread that he was involved in passing information to the police.”

We don’t know the conditions under which Leon Mashiach’s “confession” was obtained, or what, if any, chance he was given to prove his innocence. It is possible that the confession was forced in order to “sanction” the execution, but it is also possible that he was indeed an informant and, once caught, chose to confess. The language of the confession — two exact locations, the name of the officer he was in contact with, and what they planned to do — may attest to its authenticity, but it is also possible that the statement was dictated to him.

The description of events, among other things the wording – “the court denied the request”, creates the illusion of an orderly judicial process. However, it is equally possible that everything happened quickly, and that the orderly procedure was nothing more than a short conversation before the execution. It is interesting that in this case, the “evidence” was presented in the form of a confession, while in the case of Kadia Mizrahi, there was no evidence at all besides “her lifestyle”, which had no real connection to the acts she was accused of perpetrating. The short news item about Mashiach’s execution was published in the newspaper HaTsofe, where the headline called it a “murder”, although the article itself was not critical of the act. Mashiach was buried in Petah Tikva. Meanwhile, the Leon Mashiach file in the archive of the Jabotinsky Institute remains confidential and is kept in a safe.

The poster published by the Irgun concludes with a general paragraph that is both a warning and a threat promising a similar fate to anyone who cooperates with or passes information to the British. The public methods used by the Irgun and Lehi provoked widespread criticism from within the Jewish community, while the Haganah were relatively shielded from public outcry because they were more discreet about the murders they committed.

In Jerusalem, a body calling itself the “Thou Shalt Not Kill League” was established, which tried to combat acts of violence aimed at Arabs and Jews alike. In the many leaflets it distributed around the country it called the perpetrators of the violence “terrorists.” After Kadia Mizrahi’s murder, the league distributed a leaflet that mentioned her name and raised the question of the legitimacy of the drumhead court-martials and criticized their decisions. “Who is the court? […] What are their names so that we may know?” The murder of women in particular shocked the community. In another poster the league called to “Lend us a hand, join us and together […] we will burn the scourge of terrorism from our midst”. Despite the public protest, the murders continued, right up to the outbreak of Israel’s War of Independence.

The main problem with the executions, apart from the violence and the use of the death penalty as a solution, is that to this day it is not known what acts the “guilty” were actually responsible for. Aside from the important question of whether collaborators indeed deserved to die, the secrecy in which the organizations conducted their “trials” leaves no possibility of critically examining their actions. Was Kadia Mizrahi executed because she really was an informant for the British, or did false rumors and accusations, along with her lifestyle and the presence of trigger-happy executioners lead to her death? Did Leon Mashiach actually confess to his actions, or was his a forced confession, extracted in order to justify his execution?

We will never know since the “Irgun Tribunal” was conducted in the form of a drumhead court martial. The murdered were not allowed an orderly proceeding with a prosecutor and a proper defense and this issue remains unaddressed to this day. With the establishment of the State of Israel, this practice was repeated only once: the execution of the officer Meir Tobianski who, innocent of any crime, was murdered at the hands of a drumhead court organized by veterans of the Haganah. This case was investigated in depth, and we can only hope that the State of Israel learned its lesson.