The Siddur That Survived the Nazis

This prayer book was published by Schocken in 1937, a year before Kristallnacht. Decades later, a reader at the National Library was surprised to find in it a clearly visible Nazi seal featuring a swastika... 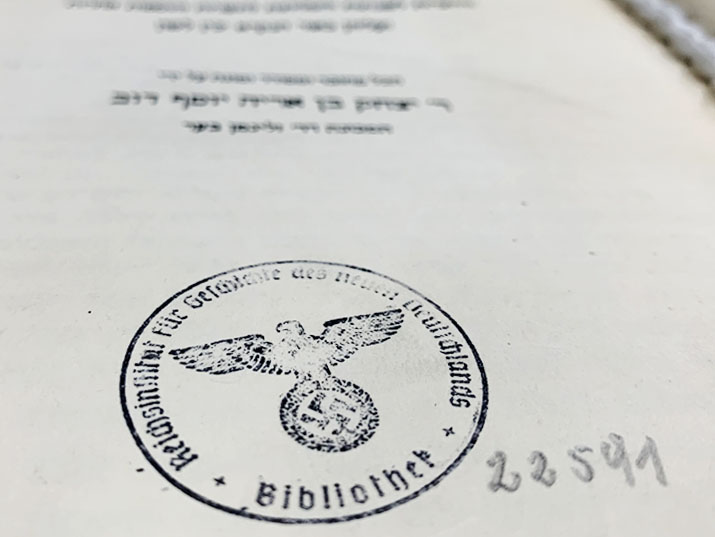 A stamp featuring a Nazi "Imperial Eagle" clutching a swastika - the "Reichsadler", found on the siddur's title page, photo by Udi Edery

The synagogue in the current National Library of Israel building is located on the top floor. Observant visitors and employees gather here throughout the day to pray. For this purpose, the nearby reading rooms have siddurim (Jewish prayer books) available on their shelves. And so, not too long ago, a student working in the Music Department asked for a siddur so that she could take part in prayers.

The young woman was given a siddur that was thicker, heavier and larger than usual, and began to pray. But as soon as she opened the book, she was utterly shocked to see a complete, perfectly clear stamp of the Nazi eagle, its claws clutching a swastika underneath it, surrounded by a caption in German – the Nazi Reichsadler. The seal appeared on the siddur‘s title page below the Hebrew caption which read: “Seder Avodat Israel, including prayers and blessings for the entire year, Shabbat portions and additions, selichot and additional prayers, with Yakin Lashon commentary, authored and edited by Rabbi Seligman Baer (Isaac Dov) Bamberger.”

The title page states that it is a revised edition, published by Schocken in the Hebrew year 5697, or 1937. A year later, the “Night of Broken Glass” – Kristallnacht – would take place, while the racist Nuremberg Laws were already in full effect at the time of publication. The Nazi stamp belonged to the Reichinstituts für Geschichte des neuen Deutschlands library, namely the “Reich Institute for the History of New Germany.”

Librarians at the National Library of Israel are very familiar with the stamp and with the Reich Institute, as the seal appears in many books in the library’s collections. The books were brought here immediately after World War II, following the Holocaust, by the Jewish Cultural Reconstruction, Inc. organization. The group’s logo – a Star of David and the JCR’s name in Hebrew – also appears in the book.

The siddur contains another piece of history: a Hebrew label indicating that it was printed under a contract with the M. Lehrberger and Co. publishing house in Frankfurt am Main, “who had the good fortune of publishing the first edition of Seder Avodat Israel.” The Schocken publishing house continued to operate in Germany even after the Schocken family immigrated to Mandatory Palestine, when this was still permitted in Nazi Germany. Books such as this one were printed right up until the beginning of the Holocaust. Like many books belonging to Jews in Germany and in German-occupied countries, they were looted and collected as part of the Nazi plan to document the culture which they were simultaneously systematically destroying.

The original copies of Seder Avodat Israel were published in Rödelheim (a Frankfurt suburb) in 1868 and hundreds of editions were published throughout the years. Seligman Baer was a grammarian whose work focused primarily on prayers and piyyutim (Jewish liturgical hymns). The siddur was also designed to appeal to “modern” Jews who could read Hebrew but spoke German, thus the instructions do not appear in Yiddish but rather in German spelled with Hebrew letters. The commentary on the prayers and piyyutim is philological and summarizes modern research in addition to providing the traditional erudition. The siddur’s target audience was traditionally Orthodox Jews who were acquainted with European languages, Latin, as well as philology and Bible studies.

Either way, if you are not a librarian at the National Library of Israel, and you are not accustomed to opening books and finding the Nazi seal in them, then encountering a siddur such as this one can come as a bit of a shock. Indeed, when one holds this prayer book in their hands, the eyes move naturally from the Nazi seal to the stamp of the “Jewish National and University Library”. How fierce is the irony of history – with this siddur now being put to use in Jerusalem, in the National Library of the State of Israel and the Jewish people.

The Two Pages that Survived the Nazi Book Burnings