The Wondrous Journey of Selma Lagerlöf and her Lover in Jerusalem

Author Selma Lagerlöf and her Jewish lover, the writer Sophie Elkan set off for Jerusalem. That trip would be the basis of her book that eventually led to her being awarded the 1909 Nobel Prize for Literature. 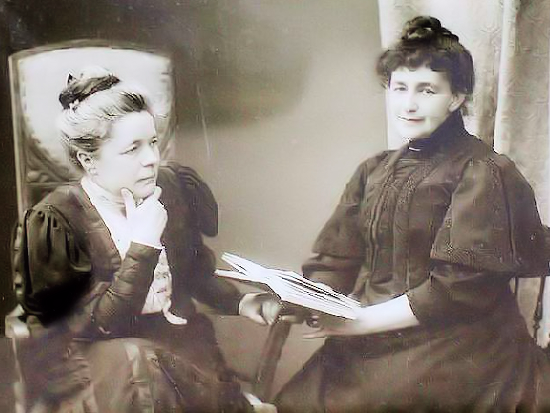 “The month of August in Palestine was terribly hot. Every day the sun hung high above the heads of the people. Not a cloud could be seen in the sky and not a drop of rain had fallen since April. While it was not any worse than any other year, nevertheless it was nearly unbearable. It was impossible to know how to deal with the heat, other than to run away in order to escape it.”

(From part two of Jerusalem by Selma Lagerlöf)

More than a century ago the Swedish authors Selma Lagerlöf and Sophie Elkan visited Jerusalem. Lagerlöf was then in her forties and Elkan just a few years older. Their visit was part of an extended tour through the Middle East during which they traveled across Egypt, but Jerusalem was indeed the highlight of their journey. They remained in the city for a long time and Lagerlöf drew upon her memories of her stay there for her novel Jerusalem, which she wrote upon her return to Sweden. This was one of the books for which Selma Lagerlöf was awarded the Nobel Prize in Literature by the Swedish Academy in 1909.

Lagerlöf was born on the large family estate called Marbacka in the southwest of Sweden. At the age of three she came down with polio which affected her legs, and as a result she developed a limp. Thereafter, she remained at home with her grandmother and was educated by private tutors. The fairy tales she heard from her grandmother and from farmhands working on the estate along with the Nordic myths she heard and read were her main source of inspiration for her writing. In the speech she gave at the Nobel Prize ceremony she thanked them all, saying she owed them a great debt.

When Lagerlöf turned twenty her father died leaving the family impoverished and forced to sell the estate. Selma moved to Stockholm where she trained to be a teacher. She then taught for ten years and from time to time would publish her poetry in magazines. After winning a prize in a literary competition she decided to dedicate herself to writing full time. She became successful and her life was filled with writing and social engagements, but she was lonely.

Sophie Elkan (nee Solomon) was a Swedish-Jewish author and translator. She was born into a wealthy and intellectual family and had an energetic and spirited character. She married at a young age and gave birth to a daughter. On Christmas in 1879 her husband died tragically of an illness. The next day her daughter was also dead. A few days later her father died. It took her a long time to rebuild her life. Her pursuit of translation and writing helped her during her recovery.

When Lagerlöf and Elkan met in 1894 they immediately developed a deep bond of friendship and love. The two women were brilliant, successful, curious, talented and independent. Elkan enjoyed traveling from a young age and had already traveled extensively through Europe. In 1895 the two set out for Italy. They were free and in love and wanted to travel the world and to write. After some time in Europe they set out for an adventure in the Middle East. This led to their extended visit in Palestine and Jerusalem at the turn of the twentieth century.

During their visit to Jerusalem, Selma Lagerlöf became curious about the unique life of the Swedish community that had joined the American Colony in Jerusalem at the end of the nineteenth century.

The members of the colony were pioneers. They contributed to the development of the local agriculture, sowed wheat fields near the colony and grew potatoes, grapes and olives. They built chicken coops and a dairy barn and started a dairy industry. They established a weaving and embroidery factory and a bakery. They were also pioneers in the field of photography in the country.

They lived together in a kind of commune. Outsiders did not understand exactly how the community operated and they treated them with suspicion. Their communal lifestyle was considered immoral and instead of being seen as devout Christians, they were viewed as religious fanatics. For their own part, they were very friendly and succeeded in building good relations with the local population.

The more Lagerlöf got to know them the more she was impressed by them. That is why, despite all of the things she saw during her stay in Jerusalem, she chose them as the center of her novel. The story begins with the peaceful life of the farmers in Sweden and then goes on to tell about their lives once they reach Jerusalem. Like the Jewish pioneers, also Lagerlöf’s pioneers had to deal with the giant gap between the dream and the reality, between the sublime Jerusalem of gold and light and the real Jerusalem of dreary stone houses, poverty, beggars, thirst and disease. Her book was romantic and not entirely critical of their communal life. Perhaps because of her familiarity with them, she did not feel that she could tell the whole truth about them.

Jerusalem was a deeply influential book in its day. Scandinavian literature was very popular at the time and made its way into the Hebrew literature though intellectuals who read Scandinavian literature in Russian translation and then translated it into Hebrew. Jerusalem also had an impact on the Zionist movement, even though the novel described the realization of the dream of living in the Holy Land by Christians as seen through the eyes of a non-Jew. Because of the tremendous interest it held for Jews, Zionists and those who yearned for Jerusalem, the book was translated into Hebrew in 1922.

Lagerlöf dedicated the book to her beloved Sophie “my friend in life and literature.”