How the Conquerors of the Land of Israel Spent their Time Between Battles: Hasty Photography, Football, and Boxing

Home > Where Balfour Meets Allenby > How the Conquerors of the Land of Israel Spent their Time Between Battles: Hasty Photography, Football, and Boxing
Land of Israel

A photo album taken by an unnamed British soldier during the First World War reveals the route of his unit. 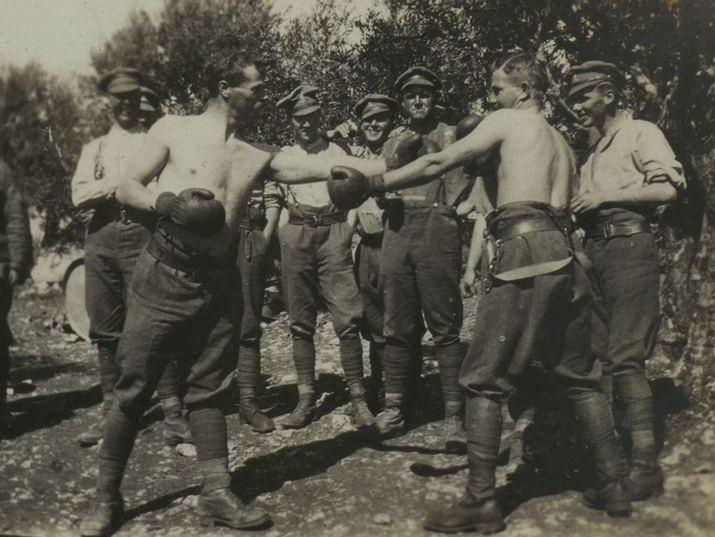 The Conquerors of the Land Photographed in the Shade

The First World War was the first time in world military history that soldiers of all armies could carry a personal camera with them and document not only the fierce battles they encountered, but some of their unit’s experiences in their free time.

For the Protestant British soldiers stationed on the front line in the Middle East who beheld the Land of Israel for the first time, this was a golden opportunity: a combination of religious fervor (which intensified as the capture of Jerusalem became increasingly imminent) together with a healthy dose of curiosity about the new-old world which surrounded them, caused many of those equipped with cameras to document, in many dozens of albums, the natives of the land, its exotic scenery, as well as “down time” between resting, training and fighting.

Several of the private albums of soldiers from both sides of the conflict are stored in the National Library. One of the most interesting of them was given a name in the Library catalog which conceals this fact: “The Photographs of a British Soldier from the First World War in the Land of Israel”.

As the album name reveals – the photographer’s identity is unknown, but it appears to be a soldier in the 74th cavalry battalion of the British Army. The soldier, presuming that it is a single soldier, mapped out the route his unit advanced through photographs which he took and pasted into an album.

As we delve further into the album we discover that the writing disappears and the photographs depicting central sites in the Land of Israel are replaced by a different type of photograph; depicting daily life in the battalion, and primarily the various ways the soldiers passed their time. The majority of the photographs appear to have been taken in Alexandria in Egypt, where the British Army camped prior to setting out to capture the Land of Israel in 1917.