The Estate of Rudolf Kayser 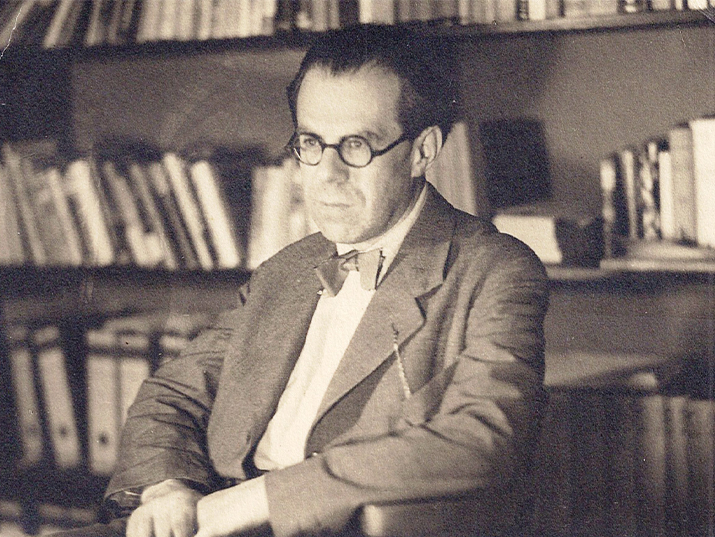 Rudolf Kayser, who died on February 5, 1964, is not necessarily known today, even among experts on literary history. This is despite the fact that Kayser was one of the most influential figures in literary circles in the Weimar Republic prior to his emigration in 1933. He was the chief editor of the literary journal Die Neue Rundschau, in publication to this day by S. Fischer Publishers in Germany. In addition to his role as an editor, Kayser authored literary compisitionsworks, including treatises on the history of literature and philosophy.

Rudolf Kayser was born on November 28, 1889 in Parchim, a small city northwest of Berlin. He passed his matriculation exams successfully in 1910. During the four years that followed, he studied German literature, literary history, philosophy and art history in Berlin, Munich and Würzburg, where he completed his studies in 1914 with a doctorate in philosophy.

Kayser married Ilse Einstein, one of the step-daughters of Albert Einstein. The marriage brought Kayser close to Einstein himself, a relationship that was intensive and far exceeded the closeness within the family. The relationship between the two also continued after Ilse’s death in France in 1934, after ten years of marriage. Kayser wrote a biography of Einstein, which was published under the pseudonym Anton Reiser, and only in an English edition.

Already as a student, Kayser composed literary texts. One of the important works of the young author was the novel Moses Tod (“The Death of Moses”), published in 1921 in the expressionist book series, “The Last Day” (Der jüngste Tag) under the auspices of the well know publisher Kurt Wolff. Kayser’s works as an editor are considered more significant – for example, the anthology of expressionist poetry, “The Tiding” (Verkündigung) (1921). His books on the history of philosophy, such as his biography of Barukh Spinoza, as well as his contributions as a literary critic – including in the journal Die Neue Rundschau – received much attention.

In his role as chief editor of the journal, Kayser occupied a key position in the world of German literature, which is manifested in his intensive correspondence with authors of his day. His estate includes many letters from Gerhart Hauptmann, Herman Hesse, Oskar Loerke Heinrich and Thomas Mann, and Stefan Zweig. In many cases the relationship with these authors continued after Kayser left the editorial board of the journal in 1932.

As the brother-in-law of Albert Einstein, who was hated by the Nazis, as a Jew and as a liberal literary critic, Kayser had not choice but to emigrate from Germany after the Nazi rise to power in 1933. Initially, his path took him to Holland, but following the death of his first wife Ilse, Kayser resumed his flight, arriving in the Untied States. There, he was married for the second time, and was employed as a lecturer in literature in various colleges, ultimately securing a professorship at Brandeis Universeity. In the early 1960s, Kayser visited Israel and wrote about his visit. The text was distributed among his acquaintances and friends. In February 1964, Kayser died of a heart ailment in his apartment in New York.

Already within a year of Rudolf Kayser’s death, , Kurt David Wahrman, then Director of the National and University Library, contacted Kayser’s widow and arranged the transfer of the estate to the library in Jerusalem. The material reached the library only after the decease of Eva Kayser in 2000. Of late, all of the material has been arranged and catalogued, and is now available to scholars.