One Picture, No Words

The story behind one black-and-white picture, glued to a yellowing piece of cardboard 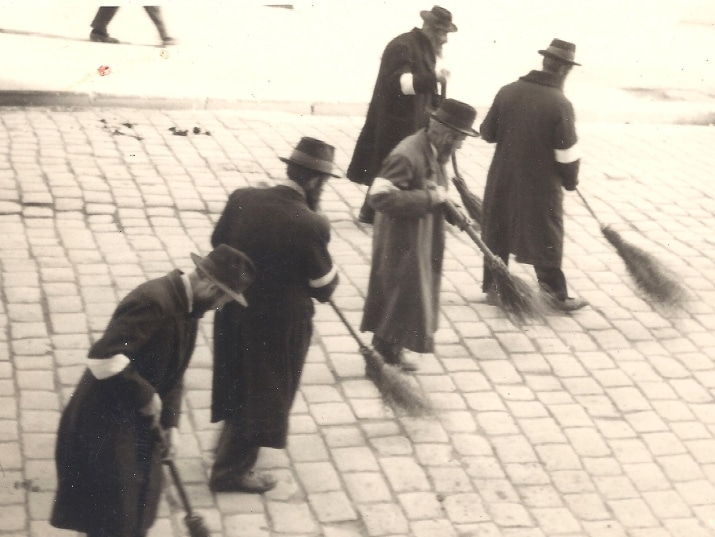 Was it torn from an old family album? The scalloped fringe must have been cut in a photo shop, as was customary at the time, when even a tiny photograph like this one, was given a lot of thought. Yet unlike family photos, which capture moments of happiness, we can’t see the faces of the men photographed here: their heads are lowered, their eyes focused on the straw brooms they’re holding. What are they doing? Who are they? Street cleaners? God-fearing Orthodox Jews (they are, after all, wearing hats!) industriously sweeping the streets before Passover? Then there are the arm bands – the white bands wrapped around their right arms raise suspicions. Is there anything drawn on those bands? Are those Stars of David? 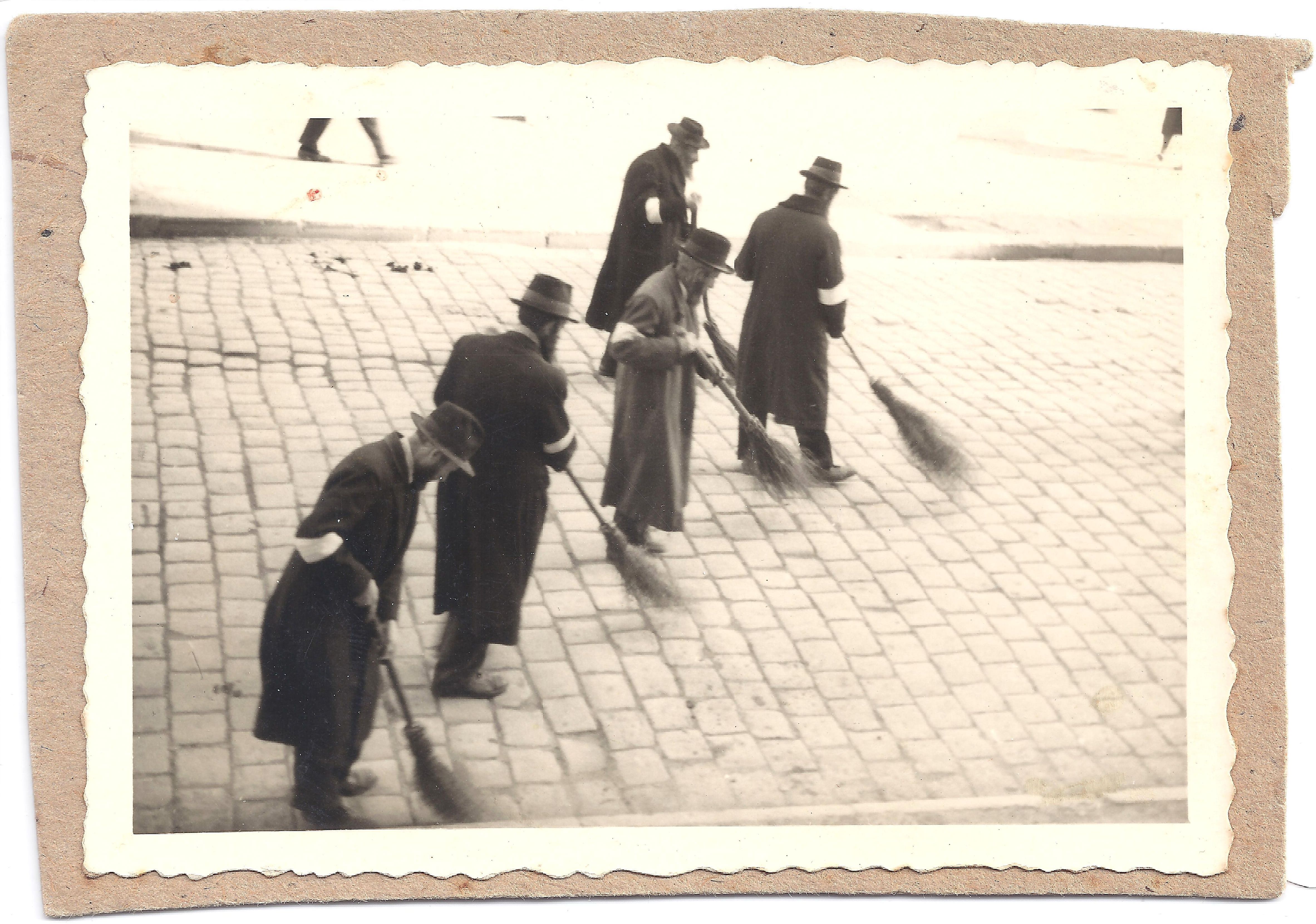 The Holocaust Comes to Rzeszów in Galicia

Contrary to the well-known saying, not every picture is worth a thousand words. There are events so horrific that even a thousand pictures and thousands upon thousands of words cannot express their true essence, not even the brief caption scribbled in a hurry, on the back of the photo: Ghetto Rzeszów.

When our glance returns to the photograph, its contents are now clearer: these are Jews in Rzeszów, in the early days of the German occupation of the city in central Galicia. “In the first two days, the Germans did not hurt anyone,” said one Holocaust survivor about the horrors that took place there, “and on the third day, they recruited the Jews to clean the streets…” This must have been September, 1939, and at first the Germans’ disposition toward the Jewish population didn’t seem all that threatening: some bullying perhaps, search warrants and various restrictions, but nothing beyond the typical abuse the local Jews had grown accustomed to over centuries of wars and pogroms.

Perhaps taking pictures of this forced labor was part of a program of collective humiliation, an attempt to trample human dignity. Or maybe it was just an innocent photograph? Moreover, who was the photographer? Was it a German officer who was looking to commemorate brief moments of pleasure he derived from the grotesque spectacle, or perhaps a random passerby holding a camera? Could someone have taken the photograph secretly, from a second story window? The high angle may support such a possibility. One can imagine a fairly simple backstory: perhaps the photographer was a Pole, who was horrified by the incident and wanted to document the event. He could have developed the image in the local photography store, where an acquaintance of his worked. As always, he carefully cut the margins of the photo so that it would match the rest of the album. When the photographer gave the photo to his friend in the store, he may have told a little joke at the expense of the Jews – “They’re finally getting some work done!” or perhaps he suggested – “We should sweep them away like dirt!” Or maybe he remained silent, his lips pressed into a thin line, the look of a man witnessing the torment of innocents, soon be led to their brutal deaths. Perhaps he stared for a moment at the movement of those sweeping brooms in the hands of the victims, frozen in the camera eye. Their bodies, obviously sentenced to death, seemed still and motionless.

A Pair of Legs in the Left-Hand Corner

These are apparently the legs of an innocent Polish bystander who randomly walked by. It is certainly not a Nazi soldier overseeing the forced labor, since he isn’t wearing the typical high boots. We can’t find fault with the innocent Pole, who witnessed what was transpiring as he walked down the street, any more than we can blame the photographer who captured the moment through the window; they couldn’t predict future events! Even one of Rzeszów’s own Jewish sons, the Zionist leader Meir Ya’ari, then living in Kibbutz Merhavia in Mandatory Palestine, could not comprehend the extent of the horror. Ya’ari stated before his comrades at a meeting of the executive committee of the Kibbutz Artzi movement in 1943, “How can it be that a city like Rzeszów, that entire cities, are put on trains, burned in incinerators, […] within a few hours? Can our minds conceive such a thing, can our souls contain it?”

How Did the Picture End Up at the National Library?

Every piece of documentation must be collected. Every photo, every letter, every document. That was what writers, intellectuals and ordinary people all over Europe thought, during and after the Holocaust. If not, the next generations wouldn’t be able to comprehend what transpired in such a short time. One of those diligent collectors was Shimon Kantz, a Yiddish author, who during the Holocaust managed to escape to the Soviet territories, and after the war ended, returned to his devastated Poland. With endless dedication, he painstakingly collected every scrap of information relating to the acts of mass-murder and widespread abuse, editing the raw material and filing it away. This photograph is one of those collected scraps of information kept in his archives, which were later given to the National Library of Israel. The photo, along with the other items Katz kept in his archive, wouldn’t give him peace. Katz wrote and edited more than fifteen memorial books for various Jewish communities that were destroyed during the Holocaust. When he immigrated to Israel, in 1957, he brought those silent testimonies with him, and despite his extensive literary endeavors, the photo continued to torment him. Therefore, when we look at this photograph, perhaps we should pause for a moment and reflect on the silent horror that it contains.