How did the Jewish community deal with notorious gangsters and organized crime stemming from its midst? 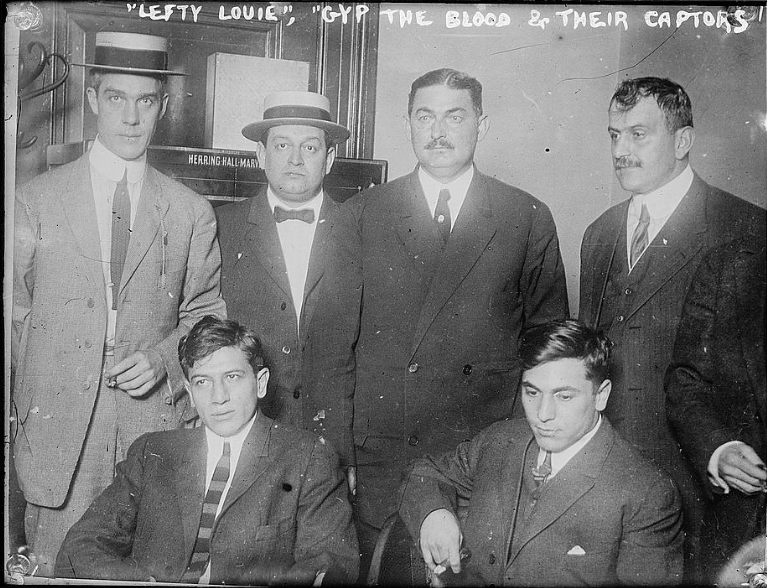 At 68 Second Avenue, there is a restaurant in the basement floor underneath the drug store, known as Richman’s restaurant. This place is open a short while and for the past two weeks we have observed that as late as 2, 3, 4 and 4:30 in the morning this place is open. On looking into the basement from the sidewalk there can be seen eight, ten, twelve and fourteen men around the table playing cards with money or chips on the table. This place should be handled immediately.

(From a report of “The Secret Jewish Police.” The original is in the Central Archives for the History of the Jewish People)


“A cancer gnawing at our flesh, regardless of the level of the crime”

East European Jews who immigrated to New York at the turn of the twentieth century imagined a new life for themselves in the “Goldene mediene” (the golden country), a place brimming with possibilities. Among the new immigrants were those who had owed money, escaped all sorts of run-ins with the Jewish community or the local law, or saw no future for themselves in the land of their birth. All of them had come to realize the American dream, but some were willing to use brute force or crime to do it.

By 1908 there were one million Jews in New York City, comprising one quarter of the population. The chief superintendent of the New York City police at the time alleged that while the Jews made up only one quarter of the city’s population they represented half of its prison population. While the facts weren’t entirely correct and the anti-Semitic overtones of the statement forced the superintendent to resign the following year, there was, nevertheless, some truth to his claim: Jewish organized crime had become a major problem in the city. There were more Jewish thieves, swindlers, gamblers, bootleggers, pimps and murderers among the Jews in New York than among the Jewish communities in Europe. They answered to such names as Kid Twist, Dopey Benny and Big Jack Zelig, among others. These were Jewish gangsters who hid behind aliases, many of them racist monikers, and whose real names were Max Zwiebach, Joseph Tublinsky, William Albert, Benjamin Fine and Harry Horowitz, to name only a few.

The Jewish community that had to contend with these Jewish gangsters was a divided one: Eastern European Jews living on the Lower East Side, in the southern part of the city, faced grinding poverty in addition to all the other difficulties of being new immigrants (language, employment, housing) while the more established Jews who had immigrated to the United States earlier, mostly from Western Europe, lived in the northern part of the city, and their ranks included big department store owners who looked down at the newcomers, and felt no sense of responsibility for their welfare.

Yiddish newspapers and leaders of the American Jewish community responded defensively to the matter of Jewish crime, viewing it more as an image problem than a social ill. Only a few took it seriously. Louis Marshall, a leader of the Jewish community, said that Jewish crime was “a cancer gnawing at our flesh, regardless of the level of crime.” It was clear that old and new immigrants needed to overcome their differences and work together to eradicate the organized crime in their midst.

This is where Reform Rabbi Judah Leon Magnes enters into the picture. Magnes, who was ordained at the age of twenty-three, served as an assistant rabbi at Temple Emanu-El, the first Reform synagogue in New York and a New York landmark. In contemporary sermons he often described the ordeals of the new immigrants, but he emphasized that Jews have undergone worse trials without descending into lives of crime or prostitution. Magnes was a man of stature, connections and influence and he raised the idea of establishing an organization that would speak on behalf of the Jews, preserve their rights and deal with the problem of crime in a real way. Thus, the “Kehillah of New York City” was established in 1909 with the participation of 222 New York Jewish organizations.

Apart from departments that dealt with assistance for the needy, Jewish education and schools, religious life, and commerce, a department was established to deal with the fight against Jewish organized crime.

The Unfortunate Case of Herman Rosenthal

In July 1912, the New York World newspaper published the testimony of the Jewish gambling entrepreneur Herman Rosenthal regarding his ties to corrupt police inspector Charles Becker who headed the gaming and racketeering department in New York. Becker had given Rosenthal a loan and also provided police protection for his dubious business dealings and in exchange Rosenthal had made Becker a silent partner in his gambling business. As a result of pressure from his superiors, Becker eventually betrayed Rosenthal by raiding and then shutting down his casino. Rosenthal then turned state’s witness and testified against the corrupt police officer. A few days later he was shot dead in broad daylight near Times Square.

Becker would eventually be convicted and become the first police officer to be sentenced to death. His execution by electric chair took nine minutes.

The murderers were Jewish gangsters sent by the corrupt police. It turned out that almost everyone involved in the crime – the police, the criminals and the witnesses – was Jewish. The well-publicized case once again raised Jewish awareness of the problem of rising crime among the city’s Jewish community.

In light of the Rosenthal affair, Magnes reached an agreement with the city’s mayor and chief of police to establish a “social morality task force,” to be operated by Jewish detectives whose duty was to comb the south-eastern areas of Manhattan for information about crimes and then transmit their findings to the police would handle matters under the law.

The detectives presented Magnes, the “Kehillah,” the police and the mayor with reports of their impressions of visits to private gambling casinos, brothels and illegal clubs that sold alcohol and drugs. They also drew up lists of names of Jewish criminals and their aliases and provided information regarding their whereabouts, inside or outside of the city limits, or in jail.

Below are some reports submitted by detectives containing information about particular Jewish gangsters of New York who had been scouted out. The reports are preserved at the Central Archives for the History of the Jewish People: 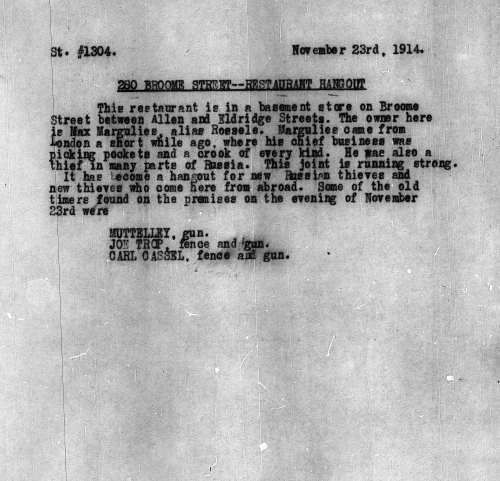 280 Broome Street – Restaurant Hangout
This restaurant is in a basement store on Broome Street between Allen and Eldridge Streets. The owner here is Max Margulies, alias Rossele. Margulies came from London a short while ago, where his chief business was picking pockets and a crook of every kind. He was also a thief in many parts of Russia. This joint is running strong.
It has become a hangout for new Russian thieves and new thieves who came here from abroad. Some of the old timers found on the premises on the evening of November 23rd were 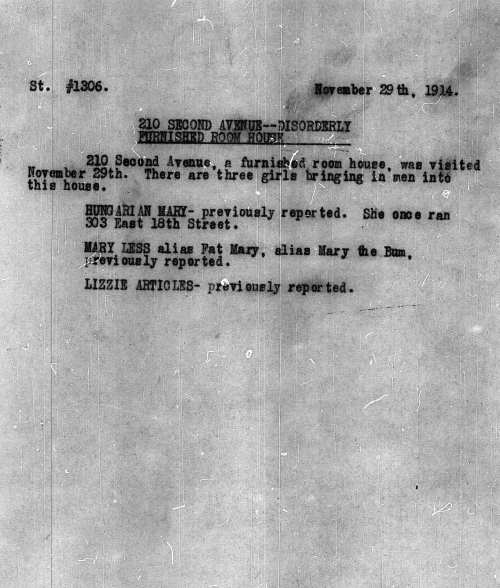 The operation continued thanks to the strong personality of Magnes and the support of the city’s mayor, but when the new mayor took office, the cooperation waned and eventually stopped. Yet all was not in vain, the “Kehillah” organization was an inspiration for other collaborative efforts between Jewish organizations and Jewish communities in other parts of the United States and its educational and philanthropic branches remain active to this day.

Magnes’ status as a community leader also changed. A pacifist, he vehemently opposed US involvement in the First World War. His stance hurt his reputation as well as his relations with the Jewish community and with other influential elements.

In 1922 Magnes came arrived in Mandatory Palestine where he took part in the founding of the Hebrew University of Jerusalem. A decade later, he would serve as its president. Magnes continued his controversial political activities in the Land of Israel, supporting a binational state from the Jordan River to the Mediterranean Sea and even traveled to the United States in an attempt to persuade government officials not to recognize the establishment of the State of Israel. However, once the plan was accepted, he met with Chaim Weizmann, shook his hand and congratulated him.

Judah Magnes suffered a stroke while in the United States and died six months later. Among his personal papers sent to Israel in the 1930s, following the disolution of the “Kehillah”, were copies of the many reports the detectives of the “Secret Jewish Police” had written as part of their battle against the Jewish gangsters. The rest of the Magnes estate was given to the Central Archives for the History of the Jewish People where they are preserved.

Thanks to Hadassah Assouline and Yochai Ben-Ghedalia of the Central Archives for the History of the Jewish People for their help in writing this article.