These "10 commandments" for building a good relationship were found in a pamphlet distributed to all students graduating from a trade school under the Nazi regime. 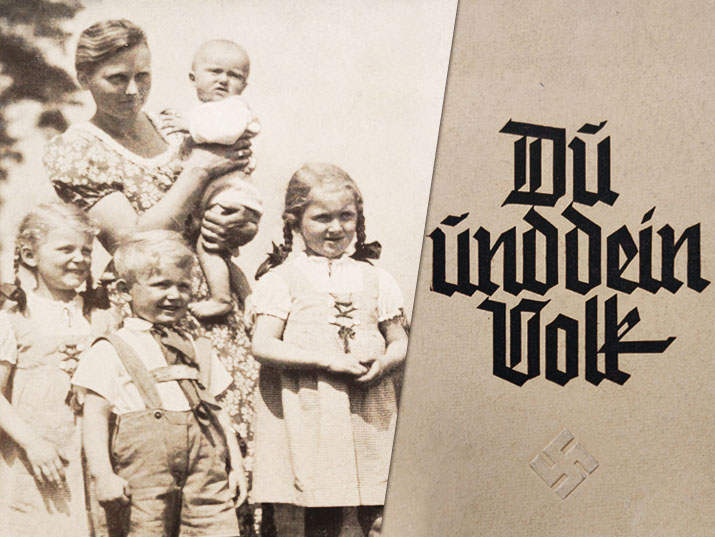 “I found this on the shelf and thought you might know what to do with it,” she said as she handed me a thin paperback pamphlet with a German title and a swastika embossed on the cover. Apparently, spring cleaning in the office can lead to some interesting discoveries when you work in the National Library of Israel Digital Content Department. The book I now held in my hand was a copy of “Du Und Dein Volk,” or in English, “You and Your People,” a widely spread piece of Nazi propaganda that was published in early 1940 and distributed by the Reich Education Ministry to young adults finishing their education. Thousands of copies of this pamphlet were printed and distributed across Nazi Germany, providing the young graduates with an easy to read, condensed version of the Nazi doctrine that all Germans were required to know. 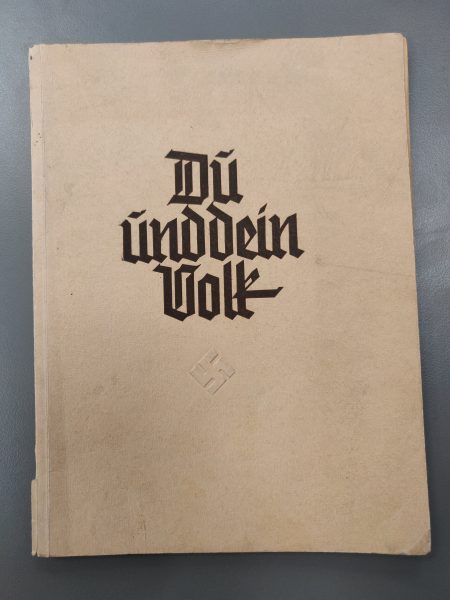 This particular copy of the pamphlet found on our shelves was bestowed to a graduate of the “Berufsschule für Tischler,” vocational school for carpentry in Vienna, named August Feigel. His name was written in cursive in blue ink on the first page of the book. It appears there alongside the name of his school, the date the book was gifted (July 6, 1940), and the signature of the school’s headmaster, suggesting this book was given as a gift to all graduating students. Upon further inspection, and with a lot of help from my German-speaking colleagues, I understood that this “light reading” contained a general summary of Nazi ideology that outlined the responsibilities of the average German citizen, encouraging the youths to marry and have many children while warning them of the dangers of marrying someone improper, including those without the proper German mindset or someone who is not of Nordic blood. In a section entitled, “Your Marriage and Your Children,” the text emphasizes the importance of marriage and of bearing as many healthy children as possible, to maintain and strengthen the right racial components for the good of society. “Your genetic line is like roots underground. When two such roots meet and unite, a person grows like a plant and breaks through the soil,” reads the text. “The sun smiles upon it, rain falls, it’s blown by storms, it wilts and withers, and finally dies a human death. Yet the genetic stream flows on long after the sun and rain and storms of that one life have passed.” The section goes on to discuss the importance of maintaining a clean genetic pool and the critical nature of choosing an appropriate spouse who has within them the appropriate racial ancestry, as well as the responsibility that lies with every individual to strengthen the Aryan race by producing healthy children. The chapter concludes with a summarized and condensed list of the ten key commandments to follow when choosing a spouse with which to build and strengthen German ideals. “You now know how to choose your spouse and understand the meaning of the following principles from the Reich Office for People’s Health,” reads the text. It then goes on to list the 10 commandments for finding a spouse: This emphasis on maintaining the proper bloodline and increasing the pure German population was a key point for graduating students as they moved out of the structured environment of their education to the real world where they would fend for themselves. After listing the ten initial commandments, the text adds an important warning to the reader: “People of absolutely pure blood are rare among us.” Just because someone matches the external criteria of the Aryan race, “that does not mean that he necessarily possesses all the spiritual characteristics that correspond to the physical appearance.” “Enough advice and warnings,” concludes the section. “If you understood these rules, you can be assured that your instincts will lead you in the right direction. You should not marry out of the calculation, but rather from love!” A few pages later, the pamphlet includes a photo depicting the ideal family, featuring a blonde woman surrounded by her children. The text goes on to describe the importance of family before switching to a discussion of “The Jewish Question” and preventing the birth of genetically ill offspring. The final pages in the pamphlet include a template for the student to fill in his own family tree, leading back to his great grandparents, so that he could prove his pure lineage. August Feigel, the recipient of this book, did not take advantage of this opportunity. “Woe to the generation that is given clarity and does not make use of it,” concludes the text. “There are only two options: to climb to liberating heights or to decline. We choose the first path, though we know it brings sacrifices and challenges, though it is difficult and will take more than one or two or three generations.” Looking back over the last three generations, the Nazis did not achieve their goals in “purifying” the genetic pool but this pamphlet, now preserved in the National Library of Israel, stands as a witness to the dangers of racism and anti-Semitism that are still apparent today. Special thanks to Dr. Stefan Litt for his help in writing this article. This post was written as part of Gesher L’Europa, the NLI’s initiative to connect with Europe and make our collections available to diverse audiences in Europe and beyond.