The Wise Men of Chelm: The Unfair Shaming of a Jewish Community

Home > Ashkenazic Jewry > The Wise Men of Chelm: The Unfair Shaming of a Jewish Community
Diaspora

How did the Jews of Chelm, a city in Poland, acquire their reputation as a "town of fools"? Could Chelm have actually been a community of great sages? We set out in search of the true story behind this odd piece of Jewish folklore… 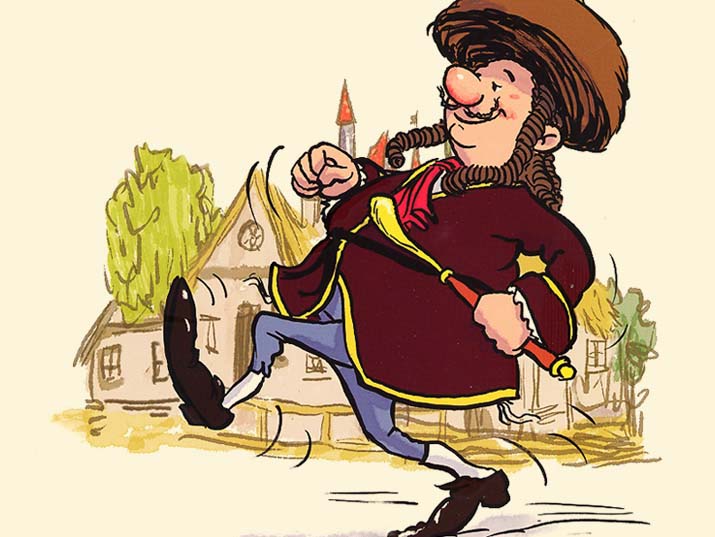 There is no wise man whose wisdom is as famous as the foolishness of Chelm, with the exception of the wisdom of King Solomon

The most famous story about the foolishness of the wise men of Chelm, and the one story that appears in every book about them, tells of how the town’s men attempted to move their neighboring mountain. Years after the town’s founding, as the people of Chelm married and raised children, the community eventually became overcrowded with young and old alike. Despite the rumors concerning their questionable mental capacity, the Chelmites realized correctly that their town had no choice but to expand as the population grew. There was a problem, however: the adjacent mountain was preventing the town from spreading out naturally.

For seven days and seven nights Chelm’s residents deliberated over the best way to solve the issue, until they decided to simply push the mountain out of the way. The next day, all the townsmen rallied together and gathered at the foot of the mountain to begin pushing with all their might. As the sun beat down on their toiling bodies, they became hot and sweaty, eventually removing their coats and leaving them in a big pile. Thieves who happened to be passing by noticed the pile of coats and without hesitating made off with the whole lot. When the people of Chelm finished their day’s work of pushing their mountain they turned back to survey the scene. With the pile of coats nowhere to be seen, they concluded that the mission had been a success and that the mountain had been pushed so far that their coats were no longer visible.

Those who came across the humorous tales of Chelm as children could be forgiven for thinking that Chelm was a place of legend, a kind of Jewish Atlantis populated by Jewish fools. Yet a bit of historical research reveals that Chelm is not a fictitious place at all, but rather a very real location with an extensive and rich Jewish history.

The Jewish community in the town of Chelm in southeastern Poland prospered for over five hundred years. Its representatives were even quite active in the “Council of Four Lands” (Va’ad Arba Aratzot), the central administrative body of Polish Jewry from the 16th century to the 18th century. From the population censuses conducted in Poland, we know that at the outbreak of World War II, there were 15,000 Jews living in Chelm, accounting for fifty percent of its residents. The Holocaust did not spare the Jews of Chelm, some of whom were murdered in the town itself, though most were sent to the Sobibor extermination camp.

Contrary to the widespread stigma, the town of Chelm actually produced quite a few proper Torah sages. One of the most prominent was Rabbi Solomon of Chelm, who became famous for his work Merkavat HaMishneh (or Mirkeves HaMishneh). According to his own testimony, Rabbi Solomon of Chelm also studied philosophy and science—a rare thing in his day—and he is considered one of the forerunners of the Jewish Enlightenment. In the preface to Merkavat HaMishneh, Rabbi Solomon prided himself on his broad secular knowledge, and even called on others to study secular subjects: “And the Bible stands wide open, ‘She has hewn her seven pillars’, and why do you not keep this on your lips, for ‘this is your wisdom and understanding to the nations’,” he wrote in reference to the seven liberal arts.

Indeed, the labeling of Chelm as a community of fools seems in itself to be quite silly. That is to say, it is not based on historical truth (how can it be?), nor even on a well-known group of fools who originated in Chelm. The accepted hypothesis for the origin of the mislabeling is much simpler. In his Hebrew book Mila Be’Sela (“Word in Stone”) writer and linguist Uri Sela writes: “In the Slavic languages, ḥolem means fool. And since the pronunciations of ḥolem and Chelm are similar, ḥolem became the city of fools in our treasury of proverbs.” In other words, an entire community was mislabeled due to a fluke of pronunciation, and that is a hard label to shake off.

The inhabitants of historical Chelm were well aware of the funny (in their opinion, misguided) stories concerning their intellect—or rather their amusing lack of it. In fact it seems they actively tried to dispel the stigma – the authors of the Chelm pinkas (the community ledger) recall their town as a place that was home to a great number of scholars. According to them, immediately after the six days of creation, angels set out from the spirit world with three sacks full of souls: one sack contained the souls of fools, another sack contained the souls of the wise and a third sack held the souls of great sages. The angels flew over the cities and villages distributing just the right amount of souls from their sacks. By the time one of these angels reached the skies over Chelm, he was already quite tired and didn’t notice the big tree growing on the top of the huge mountain next to it. The tree ripped open the sack containing the souls of great sages, scattering them over Chelm. And ever since then, the town has been full of extraordinarily bright and wise individuals.

The idea of ​​a city populated by fools is not an originally Jewish one. The first historical city to be burdened with this unflattering stereotype was the ancient Greek city of Abdera. Although it was one of the great centers of Greek foreign trade as well as the birthplace of the philosophers Democritus, Protagoras and Hecataeus, Abdera’s citizens were known throughout Greece as being quite foolish. The Abderites were the Chelmites of the ancient world.

We do not know the exact origin of the tales surrounding the intellect of the Chelmites. Similar legends about cities whose inhabitants weren’t the sharpest crayons in the box were already popularized even before the Common Era. Nevertheless, we cannot ignore a question that has been troubling us since we began writing this article: Were the stories about the wisdom of the people of Chelm really intended to be meanspirited or did they have an ulterior motive?

Obviously, these stories were not typical tales of heroism and sacrifice. No wise man from Chelm ever saved a princess from a dragon or defeated a cruel enemy in battle. And yet, this is precisely their strength: the stories and jokes about the wise men of Chelm are stories “about the day-to-day, about regular folk and their naïve and occasionally ridiculous struggles to survive, to overcome adversity, to live”. This is how writer Adir Cohen, an expert in education and bibliotherapy, explains the humor of the wise men of Chelm.

The poet and literary scholar Israel Haim Biletzky, who recorded many of the stories, writes about another aspect: “The Chelm tale is silent where its wisdom commands it to be silent. Its eyes are wide open wherever the situation requires. It is charged with life’s tribulations. It is reconciliation with man and with God, it is not a clenched fist, ready for the punch. Those who are willing to, will treasure it.” In other words, the next time you need a pick-me-up, instead of watching the latest light-hearted comedy or stand-up special on Netflix, how about reading a story or two about Chelm and its wise folk? It’s guaranteed to make you smile

And we’ll conclude with a final Chelm story to brighten your day, this time about the building of Chelm itself. After the souls of the wise were scattered at the foot of the mountain, the Chelmites decided to build themselves a large and beautiful town to live in. They built their houses out of wood, cutting down the tries on the mountaintop. To transport them down the mountain, each Chelmite carried a large wooden log on his back.

One day, a Jew from another city happened by the construction site and asked the residents why they did not simply roll the logs down the mountain. When the Chelmites tried out his idea, they discovered that this was the wise and proper thing to do. Once again they convened the city council and debated the proposal for seven days and seven nights. In the end they concluded that it was indeed better to roll the logs from the top of the mountain to the bottom. As soon as the decision was made, the wise men of Chelm understood what they had to do – they proceeded to carry all the logs that already sat at the foot of the mountain back up to the top, and from there they rolled them all back down.

Isaac Bashevis Singer, The Fools of Chelm and Their History, pictures by Uri Shulevitz, translated by the author and Elizabeth Shub, New York: Farrar, Straus and Giroux, 1973