Stolen by the Nazis: A Book’s Rediscovery in Jerusalem

Home > Austrian Jewry > Stolen by the Nazis: A Book’s Rediscovery in Jerusalem
Diaspora

The long journey of a book of Leviticus that was hidden in a Vienna basement during the Nazi era, before eventually making its way to the National Library of Israel’s Conservation and Restoration Lab… 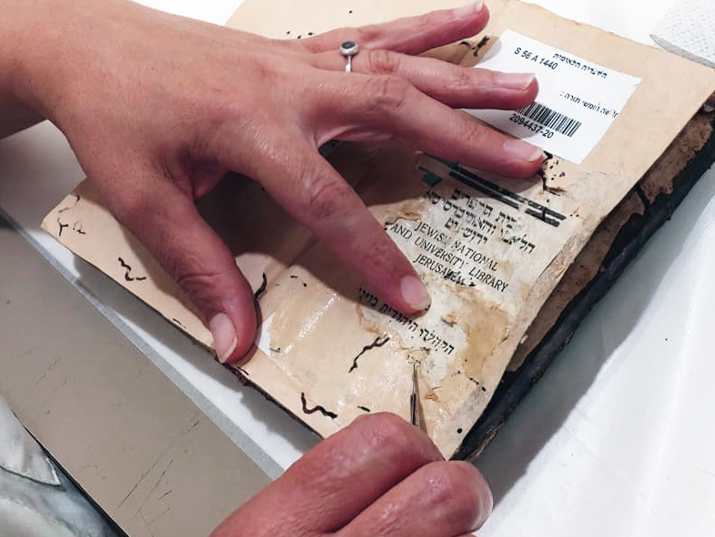 We recently came across a unique copy of the book Mesilat Yesharim in the collections of the National Library of Israel. The book had been given as a gift to a bar mitzvah boy in 1936. Tragically, the gift’s recipient and his family perished in the Holocaust some years later. The Nazis looted many Jewish libraries in Austria on Kristallnacht and in the period that followed. Among them were the Jewish Community Library in Vienna (the IKG library), and the Jewish Theological Seminary Library (ITLA), private libraries, bookstores, and publishing houses.

Most of the books were sent to Berlin to the huge library of looted books in the Reich Security Main Office (Reichssicherheitshauptamt, RSHA). Part of this library was destroyed in the bombing of the German capital, other parts were discovered after the war. We do not know the exact route this bar mitzvah book took, but in the 1950s, thanks to the persistent efforts of the National Library, and with the assistance of the Ministry of Religions and the consent of Vienna’s remaining Jewish community, many books, including this one, were brought to the National Library of Israel. A label affixed by the Library informs that the book was donated by the Jews of Vienna in memory of the victims of the Holocaust.

Some weeks later, we discovered another interesting book that had once had a Jewish owner in pre-Holocaust Vienna. According to old Library records from 1956, the book, The Pentateuch: Book of Leviticus – With Onkelos Translation & Commentary by Rashi, was sent to the Library as part of the work of the “Diaspora Treasures” project—an enterprise that brought books from Europe to Israel after the Holocaust.

We couldn’t see any label on the book at first, so it wasn’t clear that this copy had, in fact, been looted by the Nazis.

Suspecting that this was indeed a book that had survived the Holocaust, I brought it to Hagar Millman, a conservator at the National Library of Israel’s Conservation and Restoration Laboratory. “As soon as the book arrived at the lab, and in light of the possibility that it had survived the Holocaust, I immediately put our special equipment to work to determine what was underneath the inside cover page” Millman says. “It’s hard to describe my excitement when I discovered the label hidden underneath the page. I knew immediately that this was a special item that had undergone a tortuous journey before finally reaching the National Library, and that it must have come with a fascinating story”.

Before treating the book, a written report on its condition was prepared and the item was also photographed so that we could compare it before and after restoration. The removal of the paper covering the label and all the adhesive residue was an extremely delicate process that took several hours and required special tools—a thin spatula, tweezers and a scalpel, controlled humidity and reversible adhesives.

On the book’s back cover we found another important label that had also been partially hidden by a white sticker and a fabric binding on the spine (the book had been rebound at some point so that a fabric binding partially covered the label).

“Here too, very delicate work was required, until I was able to uncover the entire label, which made it possible to trace the item’s history” says Millman.

The “donation” label of the Vienna Jewish community that had been partially covered shows definitively that the book had been sent to Israel from Austria. But this was only half the story.

During the war, many books were transferred to Austria from the central library of the Advanced School of the NSDAP, established by the main ideologist of the Nazi movement, Alfred Rosenberg. The books were looted from all over Europe, not only from the Austrian Jewish community. A signature and stamp on the front pages of the book and the label glued to the back cover and recently revealed in the lab led us to the book’s origins.

According to the frontispiece, the book was printed in Vienna in 1798. The signature at the top of this page belonged to a man named Sheftel Bientz who was probably one of the book’s first owners. On the same page there was also a stamp of the Viennese branch of Agudath Israel. This was an interesting twist, as the secretary of that organization in Vienna was the person who gifted the copy of Mesilat Yesharim to the bar mitzvah boy back in 1936, writing the dedication contained within as well. It is possible that both books passed through his hands.

The label on the back of the book reads: Orientalisches Institut – Universität Wien (“Institute of Oriental Studies – University of Vienna”) and below it appears the word Leihgabe, meaning loan, indicating that the book was not originally part of the university library.

How did a book belonging to an ultra-orthodox organization find its way to the University of Vienna?

Kurt Schubert was an Austrian student who opposed the Nazis and their actions, but for obvious reasons he wasn’t able to voice his opinion publicly. Due to his asthma, he had been released from military service and used the war years to pursue academic studies. Schubert enrolled at the University of Vienna, where he studied under Professor Viktor Christian, an Assyriologist, who was also a member of the SS and among whose research activities was the exhuming of skeletons of Jews for the purpose of racial and hereditary testing.

As part of the effort to spread Nazi ideology among German academics, SS commander Heinrich Himmler founded the Ahnenerbe organization in 1935. University researchers serving in the organization were tasked with discovering the roots of the German people and scientifically proving the superiority of the Aryan race. Ahnenerbe transferred books looted from Jewish and other libraries to Professor Christian and asked him to catalog them in the hope that they would help researchers in their study of the soon-to-be extinct Jewish race. As more books continued to arrive from Austria, Germany, and Poland, Schubert and other students assisted their professor in his work.

In lieu of military service, Schubert was made an air raid warden. While on duty, he discovered a basement in the Jewish Center of Vienna where many books from the community libraries were stored. Arguing that they were a fire hazard, he obtained Professor Christian’s consent to transfer the books to the Institute of Oriental Studies at the University of Vienna. Thus Schubert saved about 20,000 books and when the war ended he returned them to what remained of Vienna’s Jewish community. These and others books eventually made their way to Israel, accompanied by Schubert himself who was invited to visit the new state.

The Pentateuch we discovered was probably kept in that very basement in Vienna. It was transferred to the University of Vienna, affixed with a university label and used for antisemitic academic research. Thanks to Schubert and the Vienna Jewish community, today it is available for viewing and research at the National Library of Israel.