Torah, Raki and Yogurt: Shavuot on the Aegean Sea

A nostalgic celebration with the Jews of Saloniki 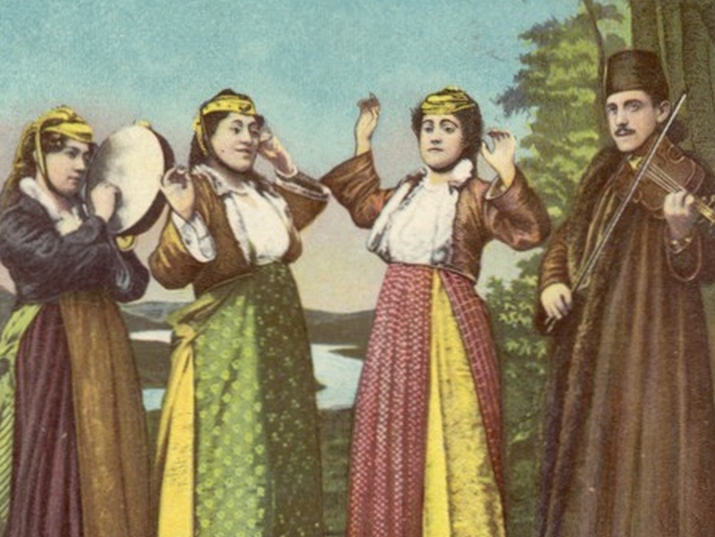 Jewish dancers and musicians in Saloniki, early 20th century (Publisher: Albert Nissim). From the Folklore Research Center at the Hebrew University of Jerusalem, available through the National Library’s Digital Collection

“Saloniki’s Jews… eagerly awaited the arrival of the Shavuot holiday… They especially loved and cherished it as the holiday of spring, of the verdant fields, of the flowers and of the ripe fruits, and anyone who got to enjoy the greenery and the fruits where they grew in the fields outside the city, in the forests, in the gardens and in the meadow – it is sublime…”

The excitement in the Aegean air was palpable as Shavuot – the festival celebrating the giving of the Torah and the ancient wheat harvest – drew near. The community’s homemakers would get wide pots ready for preparing the traditional sutlach, a dairy, sugary rice pudding dusted with cinnamon; as well as special vessels for fresh yogurt and soft cheeses prepared just for the holiday.

Knowing the season, the itinerant tinsmith would appear, announcing his arrival and his purpose: “Istañador para istañar!” Collecting dented pots and returning them “like new” a few days later, he would bless the ladies and their rice pudding, too: “¡Para sutlachiko bueno!” – “May your sutlach be good!”

Of course the festive meal was not just sutlach, yogurt and cheese.

There were the injaminados – colorful hardboiled eggs – and pastil ­– cheese cake that came in all shapes and sizes with its two main ingredients, cheese and eggs, seemingly the only thing any of them actually had in common.

Raki, of course! Though not just any raki. The kind that can only be procured from the humble home of Rabbi Yitzchak Shmuel, rich in taste and full of good luck for the holiday and season to come.

With pots clanging and the smells of sutlach and raki wafting, festive clothes certainly had to be prepared for the holy day as well. A folk adage prohibited wearing white suits and dresses prior to Shavuot, but now they could finally be readied as the holiday and summer neared.

Then, the sun set and the time finally came.

Some went to synagogue, likely struggling to focus on the prayers in anticipation of what they knew awaited them at home.

With the fruits of the housewives’ labor (and Rabbi Yitzchak Shmuel’s raki) heartily enjoyed, as the festive meal wound down and dessert was served, the Book of Ruth was read in Hebrew and Ladino, its words sung to traditional melodies. Then some would go back to synagogue for “Nochada de sevo” – traditional all night Torah study – where men and children would sit on cushioned sofas, trying not to nod off as they waited for a boost of refreshment  from the finjan.

While study, prayer and song celebrating the giving of the Torah in Hebrew and Ladino may have provided spiritual sustenance to complement the physical nourishment of the sutlach and pastil, for many, the highlight of Shavuot largely took place outside the city walls.

The streets became packed by the thousands – young and old – picnic baskets and mats on which to sit in hand, bouquets of flowers coloring the landscape, excited chatter filling the air as they set out: some towards the Monastery of the Whirling Dervishes, others towards the Five Oaks or the Sheikh’s Spring, while youth groups and the more intrepid ventured as far as the surrounding mountains and villages.

More festive holiday food would be eaten under the fruit trees. Young and old would sing songs – some traditional and some recently introduced Zionist tunes. Albert Molcho would entertain the crowd, “speaking” English, Russian and Hebrew, without actually knowing any of them. Laughter filled the air – the joy of festival, family and the impending summer.

Then as the sun began to set, children – sun-kissed and tired – would roll up into their parents’ arms and everyone would slowly make their way home, savoring every last moment of Shavuot in Saloniki.

For much of the past millennium, the majority of the population of Saloniki – now Greece’s second largest city more commonly known as Thessaloniki – was Jewish. Most of the account above came from the personal recollections of David Benvenisti, published in “Saloniki /Ir V’Em B’Yisrael“, as well as from an article which appeared in the weekly “Hed Ha-Mizrach” on the eve of Shavuot in 1946, three years after the city’s Jews were sent to the death camps. Though dedicated to “Sarah and Leah, victims of the evil one”, the article was much less lamentation than it was a poetic celebration of Shavuot in Saloniki, reflecting perhaps the core essence of a holiday centered around the transcendent and binding power of words to preserve communal memory and tradition.

This article has been published as part of
Gesher L’Europa, the National Library of Israel’s initiative to connect with people, institutions and communities in Europe and beyond.

The Cooking Accident that Destroyed a Jewish Greek Community