"Marceau started miming to keep children quiet as they were escaping" 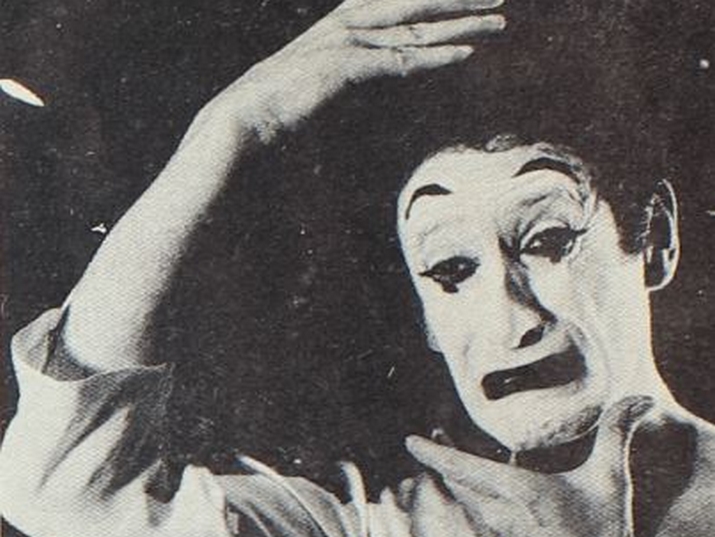 Marcel Marceau. From the Yossi Alfi Archive, accessible through a collaboration between the Ministry of Jerusalem and Heritage, the National Library of Israel and Haifa University.

He was born Marcel Mangel on March 22, 1923 in Strasbourg, France, to a Jewish family. His parents were Ann Werzberg Mangel and Charles Mangel, a kosher butcher. Young Marcel Mangel discovered Charlie Chaplin at age five when his mother took him to the movies and he became an avid fan. He entertained his friends with Chaplin imitations, and dreamed of starring in silent movies.

When France entered World War II, Marcel, 16, fled with his family to Limoges, France. In 1944 Marcel’s father was captured and deported to the Auschwitz concentration camp, where he was killed. Marcel’s mother survived.

Marcel and his younger brother Alain adopted the last name “Marceau” during the German occupation of France to avoid being identified as Jewish. The name was chosen as a reference to François Séverin Marceau-Desgraviers, a general of the French Revolution. The two brothers joined the French Resistance in Limoges, where they saved hundreds of Jewish children from the race laws and concentration camps, and after the liberation of Paris, joined the French army.

The first time Marcel used mime was after France was invaded, in order to keep Jewish children quiet while he helped them escape to neutral Switzerland.

Masquerading as a boy scout, Marcel evacuated a Jewish orphanage in eastern France. He told the children he was taking them on a vacation in the Alps, and led them to safety in Switzerland. Marcel made the perilous journey three times, saving hundreds of Jewish orphans. He was able to avoid detection by entertaining the children with silent pantomime. The documentary filmmaker Phillipe Mora, whose father fought alongside Marcel in the French resistance, said, “Marceau started miming to keep children quiet as they were escaping. It had nothing to do with show business. He was miming for his life.” While fighting with the French resistance, Marcel ran into a unit of German soldiers. Thinking fast, he mimicked the advance of a large French force, and the German soldiers retreated.

Word spread throughout the Allied forces of Marcel’s remarkable talent as a mime. In his first major performance, Marcel entertained 3,000 US troops after the liberation of Paris in August 1944. Later in life, he expressed great pride that his first review was in the US Army newspaper, Stars and Stripes. Owing to Marcel’s excellent command of the English, French, and German languages, he worked as a liaison officer with General George Patton’s army.

Marceau joined Jean-Louis Barrault’s company and was soon cast in the role of Arlequin in the pantomime, “Baptiste” (which Barrault had interpreted in the film Les Enfants du Paradis). Marceau’s performance won him such acclaim that he was encouraged to present his first “mimodrama”, Praxitele and the Golden Fish, at the Bernhardt Theatre that same year. The acclaim was unanimous and Marceau’s career as a mime was firmly established.

In 1947 Marceau created “Bip the Clown” which was first played at the Théâtre de Poche (Pocket Theatre) in Paris. In his appearance he wore a striped pullover and a battered, beflowered, stovepipe silk opera hat. The outfit signified life’s fragility and Bip became his alter ego, just as the “Little Tramp” became Charlie Chaplin’s. Bip’s misadventures with everything from butterflies to lions, from ships and trains, to dance-halls or restaurants, were limitless.

For the next six decades, Marcel was the world’s foremost master of the art of silence. Pop star Michael Jackson credited Marcel with inspiring his famous moonwalk. In 2001, Marcel was awarded the Wallenberg Medal for his acts of courage during the Holocaust. When the award was announced, people speculated on whether Marcel would give an acceptance speech. He replied, “Never get a mime talking, because he won’t stop.”

Marcel Marceau died at the racetrack in Cahors, France, on 22 September 2007, which happened to be Yom Kippur, at the age of 84. At his burial ceremony, the second movement of Mozart’s Piano Concerto No. 21 (which Marceau long used as an accompaniment for an elegant mime routine) was played, as was Bach’s Cello Suite No. 5.

Many thanks to the author and JewishGen for permission to republish this article. It appears here as part of Gesher L’Europa, the National Library of Israel’s initiative to connect with people, institutions and communities in Europe and beyond.

Celebrating in the Shadow of WWII: “Jewish Photos” from September 1939